In the spring, a picture of a person sitting right in the trenches and giving online talks became viral on the Internet. Wearing a Ukrainian military uniform, a full battle dress with an automatic rifle over the shoulder, the soldier, as it turned out, is a teacher, who was lecturing the students of Uzhhorod National University online. “We are fighting for an educated nation,” they later explained in the statement to the university. [1] 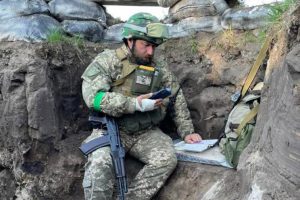 Education is empowering. Education is greatly political and culturally important. Ukrainian education is, as well, affected by the war. Ukrainian Education Ombudsman Serhiy Horbachov is convinced that the shelling of the universities and museums by Russian forces is an educational genocide, aimed specifically at destroying Ukrainian culture, history, and identity. [2]

Since the beginning of the war, educational processes in Ukraine were initially put on pause, and in the occupied regions they ceased altogether. In March, all universities in Donetsk and Luhansk regions moved to safer regions of the country. For some of them, it was the first move, while the other same-region universities had dealt with a similar situation throughout the last 8 years. Many scholars and students found themselves in need of support and relocation from where their lives were threatened. Such a situation has been a challenge also for the educational institutions abroad, which faced the simple but powerful question: how can we help?

On the Russian and Belarusian sides, the academy, for the most part deeply rooted in right-wing discourse and bearded conservatism, either ignored the war or tried to respond and conform to the newly created state requirements. Teachers are fired and students expelled from programs for speaking out against new university policies, or countries’ actions. Male students then run the risk of ending up in the army, since military service is mandatory for everyone assigned male at birth in both countries. The Russian and Belarusian academic communities have demonstrated their deep atomization and inability to collectively defend their labor rights in an organized way. Because of this, some academics and students created or joined grassroots movements, which act both anonymously and publicly. For instance, the Students Against the War movement suggests the following ways of integrating an anti-war stance into education by: (1) adding blue and yellow symbols to the PowerPoint slides; (2) bringing up the topic of war in classrooms to break the silence and taboos on the discussion of it; (3) discussing the relatives or friends who are currently in Ukraine; (4) discussing anti-war texts and movement; (5) distributing flyers, brochures, and pamphlets about the war, and the anti-war movements around the university.

At the same time, other scholars and students who risk being persecuted seek study-abroad opportunities. It is becoming more and more complicated due to the closing embassies, expensive language proficiency tests, rejected access to the Russian and Belarusian bank accounts, and border-crossing legal issues. Besides, in June, Russia and Belarus’s representation in all the structures of the Bologna Process was terminated, because of the support of the war expressed by the heads of educational organizations. This exclusion means, among many other things, that Russian and Belarusian students’ diplomas can no longer be valid abroad.[4]

Many universities in European and neighboring countries have offered multiple opportunities over the past few months to help the academic communities and scholars from, first and foremost, Ukraine, but also Belarus and Russia. The independent initiatives, based in the Netherlands, Armenia, and Georgia, enlisted and described here, are helping to navigate the flood of academic support programs and assist scholars, teachers, and students at risk with information about temporary and permanent relocation, financial and psychological support or mentorship.

The newly established University of New Europe which focuses on Area Studies has conducted a special program of mentorship jointly with Akno. Within the UNE program, the academic community located in multiple European cities is connected to students, scholars, and cultural workers at risk from, first, Ukraine and, second and third, Belarus and Russia to experienced professionals from elsewhere. With this program, the university and Akno try to act as matchmakers between affiliated professionals and scholars in need, by offering students and colleagues at risk personal mentors. As a starting package, they offer each mentor/mentee a list of available fleeing/emergency/shelter/fellowship options.

Gold Key is an independent, grass-roots initiative, the goal of which is the creation of financial and psychological aid for students, professors, activists, and educational and cultural workers who reside in Russia and are against the war. The initiative provides psychological and financial help, as well as shelters within the country in case of real persecution. The project is currently in need of funds and accepts donations via cryptocurrency and European banking.

Dear Colleagues is a Georgia-based team that strives to make the information about grants, funds, the application process, and vacancies for Ukrainian scholars in exile as available as possible. The language of the instructions, due to the limited resources, is Russian only.

The main focus of the Association is on searching for the educational programs worldwide which would be available for persecuted Belarusian students free of charge or on a subsidized basis of grants and stipends. BeSSA mentors the students and other individuals, prepare them for relocation and help with paperwork and language test preparation.

Argumentation Map: Pros and Cons of the Blockade of RT and Sputnik News in the EU

AMS-IX , one of the largest Internet exchanges in the world, and ECP | Platform for the Information Society, have published an argument map about the European internet blockade of propagandist media Russia Today and Sputnik as a result of the panel discussion between various scholars, NGO’s, and entrepreneurs. The map is an overview with all the [...]

TMR is proud to host a solidarity screening in collaboration with the Emergency Support Initiative by the Kyiv Biennial and HomeCinema to raise funds for Ukraine. The event will be a hybrid video broadcast, both physically screened and online broadcasted via http://homecinema.video accompanied by a talk on Media Witnessing in times of crisis by [...]