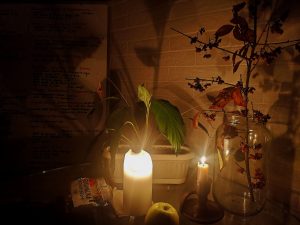 After clocks are set back one hour, Olya and I are more comfortable running at 6am: we leave while it’s still dark – no streetlights, of course, in the times of blackout – but already within next ten-fifteen minutes, when both of us reach our meeting spot near the park, the darkness is gone. By 7am, we’ve done our 6 km and we stop at the shop to get coffee, but the electricity is apparently off. “No coffee this morning, sorry,” we’re told. As we walk towards the canyon for a short hike down to the river, this time – without coffee, the air raid siren goes off. Olya laughs at me since just yesterday I was mythmaking – telling her that among all times we went to the canyon, there was not a siren even once, as if the canyon grants us a fold in the space-time of war, where it does not reach us. My myth has just been destroyed. We keep walking down the old road, immersing ourselves in the cacophony of delicate sounds of the canyon life. The field of brownish grass, where I intend cutting several samples of dry plants to take home before they eventually disintegrate under the November rains and winds, embraces us. Olya thinks I should cut a small brunch of калина, kalyna – viburnum opulus – the Ukrainian guelder-rose, but I hesitate, so she takes the knife from me and cuts a beautiful piece with red berries – in our local paganism they symbolize all sorts of things: home and native land, blood, and family roots. The moment she passes me the branch, the whole canyon is suddenly invaded by a horrific missile noise, loud as hell – a technogenic thunder, which it becomes when amplified by the canyon. Rockets. “Твою мать!” Olya yells and, by grabbing my hand, she starts pulling me down towards the ground, instinctually, while this sound itself flattens me somehow, and my body, my whole being, shrinks. As Milena explained to me later in the day via WhatsApp, in addition to the overwhelming noise, the pressure from the displacement of air by a rocket is felt by the body, thus, the tension in muscles.

I stand up-right, however, with a branch of kalyna in one hand and, like an orchestra conductor, make a sign for Olya to be silent and stop swearing, as I am quickly searching with another hand for the Recorder app on my phone, I turn it on just in time to catch that noise half-way, while we both keep frozen poses. Before we can move, another round of the technogenic thunder covers the entire canyon, and I feel a hit of adrenalin that punches me from within. The sky is cloudy, and we can’t see any clear trace apart from a tiny silver scratch on a darker cloud left by the first object. Explosions, explosions – somewhere far away. Was it a rocket and our air defense system at work? Two rockets? “How much time passed between the siren went off and the noise we heard?” Olya asks, “15 minutes?” At 8:09 am, we are still down in the canyon, processing what has just happened, the local news channel confirms two rockets flew above the town. I open the Recorder only to discover that I probably touched a wrong button in panic and so there is no record saved on my phone. When we start hiking up, twenty minutes after the event, I feel my leg and back muscles finally releasing tension, and a warm, almost orgasmic wave passes through my body, which makes me stop, turn around towards the canyon, look down and take a deep breath. This is the 250th day of the war. As we reach the city road, “Look, someone is waiting for a bus,” I say; then the bus arrives, “Life’s going on,” Olya says.

On the way home, we keep receiving messages from the local news channels and the mayor’s office about a general emergency and a high risk of rocket strikes today in our region. I also send four messages – to Geert, Niels, and Milena, to let them know what’s happening, just in case, and to Saskia, to cancel our Zoom meeting where we planned to do more recording for the documentary. Upon getting to my apartment, still without electricity, I feel extremely hungry and I cut two pieces of pig fat, bread, and, swallowing the bites of that, I start quickly packing my emergency backpack, which now has some necessary stuff needed in the case of a nuclear strike, such as FFP2 and FFP3 masks, iodine, plus, the regular necessaries like two new power banks, my computer and iPad, a headlight, batteries, documents in a firm plastic bag, cash, and a couple of items of sentimental value. I put the backpack in the corridor – it’s so heavy – between two walls. Then I pause for a bit, reading the responses from Niels and Saskia, set my phone in the ultra power-saving mode, and call my mother to say that father’s visit to the eye clinic (we are hoping for an eye surgery, as my father is getting blind) is now cancelled – no electricity, I say, but she already knows that, and yes, she has heard the horrific noise too. Then I go wash my face, put some moisturizer on, brush and braid my hair. For some time, I look at my reflection in the dark bathroom mirror, trying to decide what’s next. Suddenly, the electricity is back and my toilet that depends on it, like everything in my apartment, wakes up and starts hysterically flushing water, again and again and again, as if it is also releasing tension built-up in the pipes over the last several hours. I return to the corridor, open my backpack, and pull out my computer, which I have just packed, and, between finishing an overdue e-flux essay, preparing an online lecture for my Communication and Social Change course, I decide to write this dispatch.

In the news, which I keep sporadically checking, they report that 350 thousand apartments in Kyiv are without electricity and 80% of Kyiv residents are left without any water supply after new rocket strikes against the civilian infrastructure, and that this massive attack was conducted with drones and more than fifty X-101/X-555 cruise missiles launched from the Tu-95/Tu-160 strategic missile-carrying aircraft from the north of the Caspian Sea and from the Russian region of Volgodonsk; forty-four of these rockets were downed by our defense system, two of them fell near our town. The reports state that this success was due to the work of the IRIS-T air defense system provided by Germany earlier this month. And then I read that our local but nationally important Dniester Hydroelectric Station is hit, along with another eighteen objects of critical infrastructure around the country. In the comment section, people are outraged: “What the fuck? Fifty rockets, forty-four are downed, and still, eighteen objects are hit?” “They said ‘fifty plus’, not ‘fifty’!” “There were drones, too!” “When rockets fall, their debris damages infrastructure!” One of the rockets landed in the northern part of Moldova in the village of Naslavcha, near the border with Ukraine; no victims, they say, but the windows of several houses of local residents were damaged. I am staring at this text. That’s it. I am exhausted, maybe I should try to sleep, no, I shouldn’t, I can’t breathe anyway, I am suffocating, maybe it’s my jogging bra, need to urgently take it off. Better.

Violence is an Image: Weaponization of the Visuality During the War in Ukraine

Can an image be a weapon? By the word weapon I mean not the device that helps you win, but an instrument of violence — a device (in this case, a symbolic device) that can inflict harm and damage.  This question was invoked during the first months of the full-scale invasion when we (the consumers [...]

Dispatches from the Place of Imminence, part 12

June 26 – August 30, 2022 I have been resisting to return to writing this dispatch for more than two months. Notes – yes, constantly. Writing – occasionally, but not so much. When the tenth dispatch was published in June, I suffered from a two-week-long depression, dark enough I confessed to our School’s Director that [...]