Since November 2022, I have been collaborating with UKRAiNATV, an independent webcasting initiative that supports a network of Ukrainian artists. I first met with Roman Dziadkiewicz, a researcher at the ASP art academy in Kraków and the mind behind UKRAiNATV, while I was searching for support to exhibit at Milan Digital Week. The project was a virtual environment, VsquaRe, developed in collaboration with my Italian colleagues Arianna Ciattini, Camilla Murolo and Giulia Gandolfi. This event, promoted and hosted in Kraków, Poland, by UKRAiNATV, started my personal involvement in the studio. Other members of the team, whom now I can call my family, are Gleb Dovzhuk, Faina Fisher, FED, Ksenia Mirgorodska, Artur Zahreba, and other artists who operate mainly in Kraków. Most of them are from Ukraine and some are from Belarus and Poland. But, what finally unites them all is sharing a common space that is physical, a network that is floating in the ether, and the idea that it is not anachronistic to believe in an anarchic arrangement in 2022. And of course, support for Ukraine.

In December, we had the pleasure to host Geert Lovink of the Institute of Network Cultures in Amsterdam. Between the 5th and 7th of December, he gave lectures and workshops in collaboration with UKRAiNATV, confirming what has become a full-fledged, open-ended collaboration, in which the Amsterdam-Kraków axis will work together with the intention of opening and supporting a studio in Kyiv. From February 2022 until today, Kyiv continues to suffer attacks by Russian armed forces, with no signs of retreat even during Christmas. UKRAiNATV is in contact with various artists and collectives on site (including Carbon), but in order to think about opening an operational office in a city under attack, where there is often no internet connection or electricity, funds and collaborators are needed. Regarding this, a callout has been published: Support Campaign for the UKRAiNATV Network: Krakow <-> Kyiv & More.

Over the past two months, UKRAiNATV has become my family, my collective, and my obsession. As someone from a country like Italy, the war in Ukraine still felt like something distant and out of reach. Collaborating with people who have friends and family in a country that is bombed almost daily has reshaped my perception of this war, and of the role I have in it as a person that lives in one of the safest parts of Europe. During various meetings with studio members, I began to think about the responsibility that this kind of work entails. All the artists and people involved in the network, who have found a voice and a home through it, deserve proper representation. Media power, from the political propaganda of the state media to the counter-propaganda of the independent media, is something real.

I started looking around, gathering information on mainstream media, and collecting a list of pros and cons to consider with our broadcast. Back in Italy for a short Christmas break, I had a look at the state news channel; bile started to rise quickly, along with a wave of disgust that brought me back to reality: where have I been living for the last three months? I started to see the bubble I had created around myself, carefully selecting content on my social networks, circle of friends, and work environment. How is it possible that a state television like RAI airs a carousel that ranges from sexist reports to films that still contain the n-word in a dubbing from 20 years ago? The gap between ‘us’ and ‘them’ is getting bigger and bigger. I was almost unaware of the immense wall I was building around myself, like a shell. How do you make a counter-information network reach the masses whilst avoiding censorship, shadowbans, and polarization of thought? There is no answer yet, only a series of attempts with dead ends.

I also started to collect examples and experiences, especially within political investigative journalism. The list of journalists killed, metaphorically and not, because they tried to shed light on the problems that permeate institutions and governments, is remarkable. As far as the Italian press is concerned, the case of Ilaria Alpi, an Italian journalist who was killed in 1994 in Mogadishu, while she was covering a case of arms trafficking and illegal toxic waste, in which she believed the Italian Army and other institutions were involved, is an example of censorship that has gone far beyond that. Giulio Regeni and Patrik Zacki are two other examples. The first was an Italian student who was kidnapped and tortured to death in Egypt while researching Egyptian independent trade unions. The second is a Coptic-Egyptian student arrested in Cairo while pursuing an Erasmus Mundus Master’s degree in Women and Gender Studies at the University of Bologna. From 7 February 2020 to 9 December 2021 he was detained in Egypt because of his research, and publications in the field of rights. The charges against him have not been dropped yet, and a further hearing is scheduled for 28 February 2023. The list goes on and on.

All this digging led me to the following realization: How can we maintain hope to persevere in the pursuit of truth, despite the fact that every collective effort seems destined for failure? Here we come to the analysis of the case of Federico Aldrovandi, an 18-year-old from Ferrara killed on 25 September 2005 by four state police officers. More than the story itself, yet another example of abuse of power by the Italian police and especially of impunity (the four agents each served less than six months in prison); it is interesting because of the role that different types of media have played in the trial. After her son was killed, the mother – Patrizia Moretti – decided to start a blog to raise awareness for the case.

It was 2006, a year when blogs run by common people were not so widespread, especially in a provincial city like Ferrara. This blog would allow the media to keep the spotlight on a case that will see a five-year-long trial. In addition to the blog run by Patrizia Moretti, another element – that is not exactly common in Italian crime cases – made me reflect on how strongly truth, justice, activism, and the visual arts are connected. In June 2009 a graphic novel about the case, ‘Zone of Silence’, was published and brought to the courtroom during the trial. At this point in the Aldrovandi case, a verdict had not yet been made. I would like to think that book, written and illustrated by Checchino Antonini and Alessio Spataro, played a pivotal role in representing a part of the truth that the culture of that time was not ready to digest.

‘Zone of Silence’ and its role of documentation and activism reminded me of other examples of politically engaged graphic novels, including ‘Kobane Calling’ (2016), by Italian cartoonist Zerocalcare, and ‘Persepolis’ (2000), by Iranian artist Marjane Satrapi, adapted in 2007 as an animated film.

The Aldrovandi family lawyer, Fabio Anselmo, (interviewed here by Francesca Zanni in her podcast covering the case, ‘Rumore’), speaks on the importance of images: “We, and I say we as a people, live on images, television, photographs, not reflection, not study, not reading. So we need to see. And sometimes, even that is not enough.” Hence the lawyer’s decision, with the approval of the family, to publish the photo of Federico’s body, which became the symbol of the judicial affair. 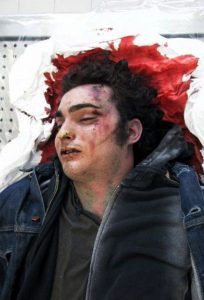 It’s important to include this photograph of the autopsy because it made me start to dig deeper into this topic. Images tell stories, but they are also memory. In this case, it is a document, a piece of evidence. The message is clear, even brutal, but without too many sentimental/poetic intentions it conveys a message: never again. In that bloodstain, one can see many other stains, without looking too far. To end 2022 on a ‘high’ note, Russia decided to bomb several Ukrainian cities, including a hotel in the centre of Kyiv.

Today is January 7, 2023, and our hands are covered in blood. The conclusion I have come to is, that as an independent network existing in an era when we can trust very little, we need images. It is our duty, as voices for the oppressed and censored, the ones reduced to live with no connection nor electricity, bombarded with the most boorish propaganda, to collect the images that document what is happening. We do not forget and we want justice and real repercussions for what Russia, in front of everyone’s blind eyes, is doing to Ukraine. We, therefore, must create an archive of it, and a network that connects as many people as possible, creating human bonds, when the world wants to see us divided, in a climate of collective hatred and resentment. UKRAiNATV, a melting pot of artists of all kinds – visual artists, performers, painters, DJs, and videomakers – aims to collect every audio-visual and hybrid artifact, to create a collective memory of what is happening to Ukraine in the anno Domini 1917. Pardon, 2023.

Since March 2022 an artist-led online video initiative started to operate from the art academy in Krakow called UKRAiNATV. Earlier, we posted an announcement of them, here on his blog. Since a few days there is now is an official website now with basic information about the initiative, including links to their work. Also, a [...]

Dispatches from the Place of Imminence, part 13

After clocks are set back one hour, Olya and I are more comfortable running at 6am: we leave while it’s still dark – no streetlights, of course, in the times of blackout – but already within next ten-fifteen minutes, when both of us reach our meeting spot near the park, the darkness is gone. By [...]