In the second session of the Unlike US! meeting, Oliver Leistert and Marc Stumpel addressed the entity that is rapidly becoming synonymous with the term social media: Facebook. As the giant among other platforms like Twitter, Youtube and such, Facebook seems to singlehandedly dictate the list of issues raised by the Unlike Us! network in general. Leistert and Stumpel focused in their talks on the possibility of defiance.

Leistert’s talk was representative of the wider criticism on Facebook. He presented the main findings of his recently co-edited critical volume on Facebook and added several observations of his own.

Coming from a “techie” background, connected to activism, the main point of criticism Leistert directed at Facebook is the extremely poor trade-off between being able to use a software platform for social activities and have your data collected and kept on a central server, uncontrollably beyond the reach of the user and concurrently bundled, sold and monitored.

This leads, in the words of Andrejevic as expressed in his essay in the above-mentioned bundle, to a ‘digital enclosure’ in which the goods formerly considered to be ‘common’ now fall in the hands of private companies. Other authors note that the development of Facebook features over time strategically allow for maximization of data gathering for commercial purposes.

The resulting ‘like economy’ is, according to Leistert, a logical outcome of the ongoing neo-liberal subjectivication. People are enticed to see themselves as subjects and produce snippets of personalized subjectivity in a performative arena that requires continuous production and maintenance, an ‘immaterial labour 2.0’ floating the boat of cognitive capitalisms.

Shortly touching on privacy issues, Leistert notes with amazement that privacy legislation does not unction when millions decide to sign it away. Leistert returns to the subject of defiance, pointing out that with the above features, using Facebook for activism seems rather absurd. In his final remarks he poses the question how privacy can be retained and offers Kristina Irion’s suggestion to implement EU legislation. 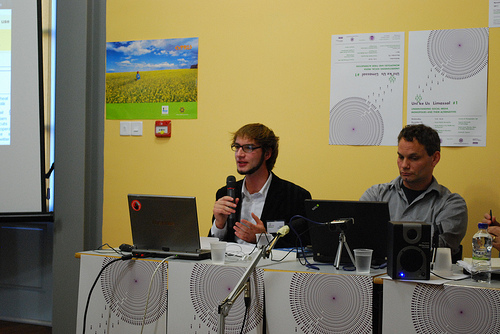 Stumpel’s topic is interestingly opposing to Leistert’s. Where the latter’s critical contributions amassed lead to the conclusion that to overcome Facebook’s inherent issues “the dragon should be slain”, Stumpel explores the possibilities of subverting and perverting Facebook from within. Presenting the work of the artist’s collective “FB Resistance”, Stumpel dwells on strategies and tactics to reappropriate Facebook, while continuing use in its current shape.

In worldwide brainstorm sessions, users were asked in what way they thought Facebook was lacking. One often heard complaint was the absence of a ‘dislike’ button, others were the inability to change color schemes and backgrounds and features, and the current importance of advertising.

An answer to many of the raised issues, stated Stumpel, are already technically feasible and some are widespread. By installing Greasemonkey plug-ins, browserside interventions allow for the lay-out of websites to change. This augmented browsing offers many opportunities to adapt a Facebook page to the wishes and needs of a user. Not only can certain feeds be blocked or the chat function be adapted, at the same time functions can be added, like the popular Unfriend Finder that allows you to keep count of the friends that flicked you off their list.

Stumpel ended his presentation with several future ideas for interventions, with the most hardcore being a complete diversion of the chat and message data around the central Facebook server not to have them stored and monitored.

Responses to both talks  drew into focus the dilemma found when addressing the issue of resistance. Will working ‘on the inside’ and reappropriating the system from within hollow out its power as it is planned, or will it not only sustain, but also corroborate the validity of the system? It may seem that continuation of Facebook use on their own terms is hardly a threat to Facebook, but it needs also to be noted that when a plug-in that hides advertisement starts being used on a large scale, advertisers will pull out and Facebook’s business model will be affected. The other option is conceptually a lot more simple: have people minimalize their time on the site and quit their accounts. But here we may note that the ‘how’ question will give rise to another debate altogether.