In the session ‘Social Media Activism and the Critique of Liberation Technology’, Greek journalist and activist Achilles Peklaris’ talk ‘Send tweets, not troops’  focussed on a shift in diplomacy methods and tactics of the United States. According to Peklaris social network dynamics have a major impact on how diplomacy is practiced since three years ago.

An important example is how the United States and its institutions supported and ‘facilitated’ network diplomacy during the Arab spring. When the Egyptian government shut down the Internet, the U.S. helped by offering alternative connections to the world, e.g. a Google service that would let people post to Twitter through voice messages over landlines. 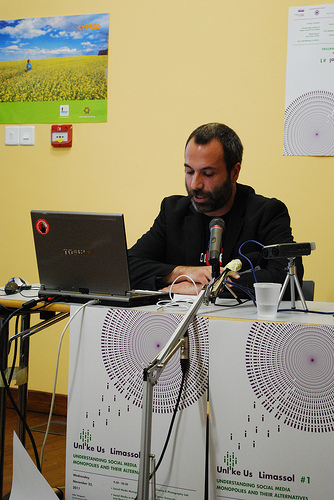 Referring to Facebook, Twitter and YouTube as the ‘backbone of the revolution”, Peklaris argued that these popular social networking sites were the catalyst: “(..) the new weapon that finally turned the tide”. Moreover, he reminded us that the USA has acted as a quite aggressive military superpower over the last decades. Now providing ‘the people’ with the means to self-organize, discuss, decide and act instead of sending troops or bombs, clearly is a better strategy for getting rid of tyrants.

According to Peklaris, the power of social networking services in this context lies in meeting and encouraging fellow people in struggle, sharing real news with each other as citizen reporters and getting support for people all over the world.

Moving from the Arab world to Greece, Peklaris explained that the Greek Left was inspired and driven by what happened in the Arab world, and also started using social networking sites such as Facebook and Twitter in their protests on Syntagmaga square. If it wasn’t for the Arab Spring, Greek Leftists group would have never used these services.

An interesting set of questions that Peklaris posed: What if American people decide to use social networking services in protests against their own system? Would the State Department keep the Internet from shutting down, when people use it to organize angry anti-government rallies in front of the White House? On whose side would Mark Zuckerberg be? The protesters of the U.S. government?

In times of crisis and turmoil, we need large networks, Peklaris argued. Alternative social networking services could provide a ‘solution’ in case the bigger ones are shutdown, but -supposedly- are not eligible to communicate with people most important to you: “Facebook is great because everyone is on Facebook”.

Finally, Peklaris pitched three ideas to be ‘(..) trained, prepaid and educated (..)in using these services, while also exercising our legal, political, consumer and democratic rights:

1: Social media education: inform and educate all the students in elementary and high school in full detail about privacy issues, legal, social behavior, do’s and dont’s.

2: Self-organization in a consumer’s movement of sorts. A union trade of users to make a stand for a large group(s) of people by reaching consensus.

3: Create a ‘shelter’ for Facebook , Twitter, YouTube and other networks. A meeting point for ‘e-refugees’ and a storage for all your important data in case of a ‘shutdown’.