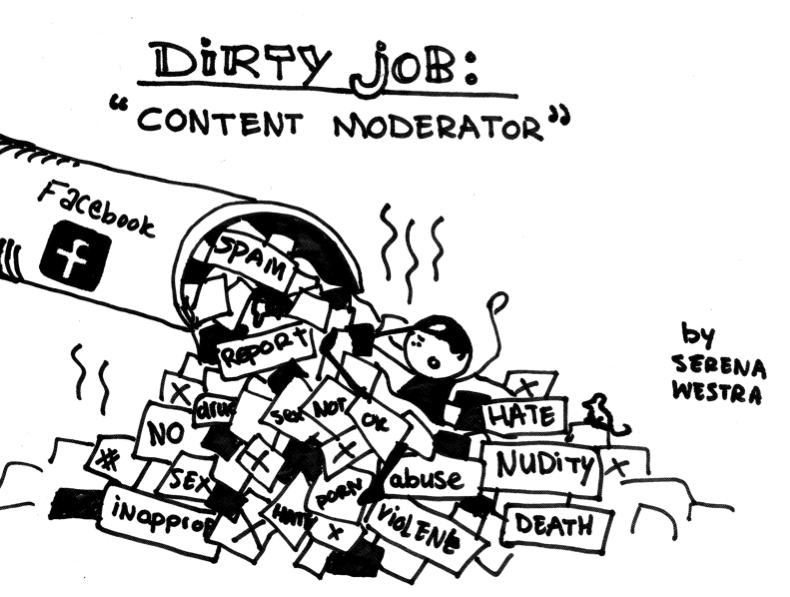 As one of the most influential online social media platforms, Facebook thrives on the distribution of its users ‘private’ data and is therefore highly dependent on the concept of transparency. Over the years it has however become clear that founder Mark Zuckerberg doesn’t seem to enjoy the taste of his own medicine. Facebook has always been secretive and unclear when it comes to what goes on behind the scenes of their social factory, which doesn’t come as a big surprise because the less the public knows about Facebook’s governance, the less resistance they will receive. Recently Gawker has shown in a very painful way that not everything can be hidden behind the veil of social democratic innocence.

Acting out some form of revenge, 21-year old Amine Derkaoui has provided Gawker with the Operation Manual for Live Content Moderators in order to give e an insight into the dirty job that is moderating Facebook content.  While research has pointed out that most users tend to uphold a positive image on Facebook by posting only their best pictures and coolest status updates as a direct result of impression management and identity formation, Derkaoui in contrary demonstrates that it is not all about rainbows and butterflies on Facebook. On Facebook everyone can join and take the stage in order to perform one’s identity and engage in social interaction. On the other hand, Facebook also gives a voice to the scum of the earth as explained by one moderator:

Another former content moderator stated his reason for quitting the job after three weeks:

“Pedophelia, Necrophelia, Beheadings, Suicides, etc, I left [because] I value my mental sanity.”

One of the pages of the manual shows an overview of inappropriate content categorized into the following categories: ‘Sex and Nudity’, ‘Illegal Drug Use’, ‘Theft Vandalism and Fraud’, ‘Hate Content’, ‘Graphic Content’, ‘IP Blocks and International Compliance’ and ‘Credible Threats’. While some degree of gate keeping is necessary and totally reasonable, in the case of Facebook it can also be worrying as Gawker explains:

“(…) walking the line between keeping Facebook clean and excessively censoring its content is tricky, and Facebook’s zealousness in scrubbing users’ content has led to a series of uproars. Last April, they deleted an innocent gay kiss and were accused of homophobia; a few months before that, the removal of a nude drawing sparked the art world’s ire. Most recently, angry “lactivists” have been staging protests over Facebook’s deletion of breast-feeding photos.”

Although Facebook thrives on transparency, they also will do anything to control it, which in this case means putting a part of this responsibility in the hands of content moderators. We can all imagine that being confronted with this kind of content can take a toll on one’s psychological health. More shocking is that the people who work 4-hour shifts to perform this dirty job, come from third world countries such as India, Philippines and Mexico and receive $1 per hour plus commissions, which eventually add up to around $4 per hour. According to Gawker, most content moderators are ‘young and well-educated’ and want to make some money on the side. What is also interesting is how these outsourcing firms are never explicitly linked to Facebook. Of course, Facebook doesn’t want to smear their ‘good reputation’ with some form of third-world exploitation, which according to Derkaoui, is exactly what this is.