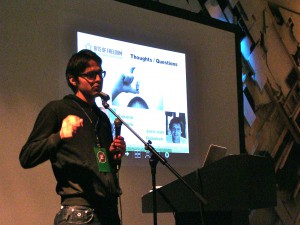 Representing the Dutch online civil rights organization Bits Of Freedom (BOF), Joris van Hoboken gave an overview of the organization’s work on Internet communication freedom and privacy related issues and more specifically in the context of social media. Since 2009 BOF acts as the protector of Dutch citizens’ online freedom and privacy in the digital age and has already spurred change in this respect.

In the context of online communication freedom BOF has for example been able to initiate change by passing a net neutrality bill by the Dutch parliament last year. Although the bill still needs to be passed by the senate, this event marks a significant victory for BOF and brings them one step closer to obtaining their goal of online communication freedom and creating strict net neutrality requirements.

When it comes to the protection of online privacy, BOF is concerned with issues like the protection of personal data, internet filters, copyright enforcement and data retention; a law that obligates telecomm communities and internet server providers to store records for long periods of time and keep these records available for law enforcement and national security agencies.

According to van Hoboken, BOF wants to expand their focus on issues concerning social media. The topics that they primarily have been working on include raising awareness by following discussions, explain and point out important developments and discuss the debate on privacy settings on platforms like Facebook. In the footsteps of Unlike Us #2, BOF also tries to raise awareness about the existence of alternatives to dominant platforms and have already explored privacy friendly initiatives like FreedomBox and Diaspora. Furthermore BOF is currently concerned with datamining and investigates how law enforcement and police request information of users on social media in the context of, for example, investigations. Another point of focus is privacy law breaches and the enforcement by data protection authorities in Europe. Does Facebook for example actually abide the European law? An interesting question which Max Schrems and his Europe versus Facebook group have been looking into.

When it comes to communication freedom online, BOF’s focus is on user restrictions which in the case of social media refers to the user’s freedom in using the platform in their own way and for their own purposes. Furthermore BOF is also exploring the legal responsibilities of services like Facebook and hosting sites in general. Van Hoboken explains that this may also concern the alternative platforms because they might also have to deal with legal restrictions and possible responsibilities when for example censoring the content of their users.

Another great annual initiative of BOF that raises awareness around privacy infringement in a somewhat informal and humoristic setting are the Big Brother Awards that shed a light on the biggest privacy violators in the Netherlands. Not surprisingly, Facebook has won the award in the category ‘companies’ on the 7th of March in de Pakhuis de Zwijger because, according to BOF,  despite a series of serious privacy breaches, Facebook still decided to sale a percentage of stock to the public.

While van Hoboken has shown how BOF has already made an impact in the field of online privacy and communication freedom, they want to expand their focus on social media in 2012. “Social media is one of the topics that we are really interested in”, says van Hoboken. However BOF doesn’t yet have a clear agenda in the context of social media, which means that determining the most pressing issues in which they could achieve the best results regarding an open Internet and protect privacy, is a priority. “That is one of the reasons why it is interesting for us to be here”, explains van Hoboken, “to see what kind of discussions take place and where could we provide added value”. BOF will for example actively look into options such as restriction.

Some of the problems their organization has already detected concerns data protection regulation, privacy rules of Europe and better enforcement of existing laws since Facebook is not complying with the legal framework that is currently in place. Other areas on which BOF could actively contribute are censorship on dominate social platforms and access to records. The latter refers to the alarming process of data mining: “What you see is that companies try to exploit the fact that they are sitting on all of the content of their users”.

However van Hoboken reiterates that the role of BOF in defending digital civil rights of social media users in particular still remains somewhat of an open question. BOF will therefore follow the issues that will arise during the Unlike Us #2 event with a close eye.