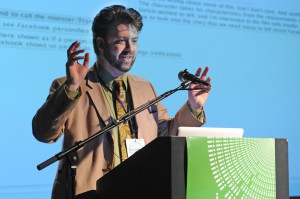 Reification 2.0 runs parallel to Web 2.0. We are continuously taking an active role in this online process of reification. We reify ourselves and others. Or so claims Dylan Wittkower (pictured right) on the morning of March 9th, 2012. Wittkower starts his talk at the Unlike Us #2 conference with an explanation of David Fincher’s movie The Social Network (2010). He is particular about addressing the falsehoods that lie therein. Was the motion picture not intended as a documentary of the life and work of Mark Zuckerberg? Not really. There is a superimposed morality about how Zuckerberg spent his college years. But who wants to know anything about that? We seem to prefer getting the uncensored details on how he is doing rather than what he is doing to us, Facebook users.

(Click here for the video of Dylan Wittkower’s presentation)

And there, the social network lurks around the corner and, according to Wittkover, the trail of myths starts. Fincher seems to have directed a movie to express his personal opinion on Facebook, which finds itself embodied in the character of Zuckerberg, just like “we tend to call Frankenstein’s monster Frankenstein”, Wittkover playfully adds.

So what are the falsehoods woven into The Social Network? Wittkower elaborates on how Zuckerberg is persistently portrayed as the devil. As if he were the entity that brought self-awareness to Adam and Eve. As if he were the personification of manipulation, with his only goal being the creation of connections to satisfy his obsession with social and economic status.

However, it is not Facebook that ended “the social”, Wittkower claims as he draws from Immaunel Kant and Mark Granovetter. Kant proposed that humans are perhaps unable to be moral beings. We might be (solely) driven by self-interest. Granovetter professed that it is not the high quality of their education that is the decisive factor of success for Ivy League students. It is the people they meet and the relationships they establish with them that guarantees a prosperous life.

Here is where Wittkower introduces the term commodification in his talk, even though he does stress that reification is his primary concern. It refers to the transformation of ourselves and others into objects. Commodification, reification and mobilization of social and personal relations are all taking place on Facebook. The platform shows us to one another as if we were things rather than as agents. Individuals are lost into abstractions, such as labor and money, and appear in economic structures instead of wandering within the social. Our sociality seems based in the free enterprise.

Just before treating his audience to a delightful photograph of his own cat, for reasons that remain slightly unclear, Wittkower notes that fortunately a higher level of self-awareness now exists within discussions of “the social” of social media. However, it is a myth that awareness lingers in the minds of social media users when it comes down to their own partaking in reification.

Wittkower goes on to categorize the key elements affected by Reification 2.0, namely relationships, others and the Self. When it comes down to relationships, we need to rebuild the architectures of code that formerly controlled and managed identity within self-presentation. There is both a necessity and a desire to present ourselves in different ways, different contexts and to different communities, which wee need to keep separate. Wittkower focuses here on the theory of encircling, based on Martin Heidegger’s Enframing. The definition of relationships needs to lie in code and centers on characteristics such as asymmetry and opaqueness. We are ordered and challenged y our roles, again defined by relationships, by code. Our relationship are no longer under constant negotiation, which finds itself open for momentary reevaluation.

Reification of others can occur in both an aggregate and individual way. In the most expressive fashion – aggregation – we treat and discover others as objects. On Facebook we are concerned with collecting friends, social gaming mercenary advertising, friendertainment and asking the network. We consider our Facebook friends to be sources of diversion and virtual commodities, and windows to the viral. Clearly enough, the latter refers to an individual as a communications hub and thus as a technological object. The individual manner of reifying others is illustrated by status friending, perceiving others as locations and disconnecting expression from agents.

In building for consumption and exposure of identities – thus Reification 2.0 of the Self – Wittkower points out three basic strategies. Firstly, there is mixed exposure, characterized by limited access to communities and performed through encircling, selectiveness of RL social graphs and indirect communications. Secondly, agonistic exposure privileges a Self that may be unacceptable or challenging to communities. Finally, lowest-common denominator exposure sees an individual performing a safe identity, which centers on accessibility and acceptability through limited and curated exposure.

Wittkower also discusses four main strategies of identity construction on the spectrum of proactive, reactive, unitary and divergent. An untidy identity – found at the corner of proactive and divergent – relies on the actions of others, such as tagging, in the making of an individual’s online preseence. A spectacular identity – proactive and unitary- draws on Guy Debord’s notion of the spectacle. It is an experience of the Self as a thing, protecting itself outwardly and ridden with interpassivity and simulacrazation. A distributed identity – reactive and divergent – is constructed on the walls of others, on group pages or on fan pages. A lurking identity – reactive and unitary – does just that: lurks aroud the Web and takes no further action. Wittkower believes that some of these strategies will resolve into more meaningful forms of interaction. Whereas friendertainment might lead to teleboredom, asking the network may very likely lead to fruitful conversation.

Wittkower concludes his talk by elaborating on his main concerns with regards to the issue of “the social” of social media. How we present others and the Self may no longer be open to discovery due to an overkill in constructiveness. We are weighed down much more that we used to be. We are no longer subject to interruption of the image that we strive to project. Wittkower believes that too much emphasis is placed on the online doings of the spectacular identity and thus the negative unnecessarily continues to be emphasized. But then again why spend time on an untidy identity? It is only for those who have little to lose.