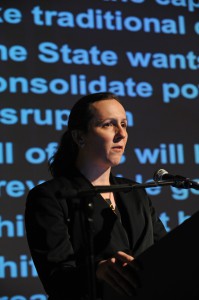 acker, artist and writer Eleanor Saitta started her presentation by tracing quite a bleak scenario of the current global situation. As overpopulation and global warming expose the limits of the human presence on Earth, financial capitalism appropriates sociality, under the disguise of normal companies like Facebook. States try and keep their controlling position, while at the same time adjusting to the world-wide flows that transcend them, thus paving the way for a “preventable geocide.”

As a designer and an activist, Saitta is now currently working on two main projects in order to bridge the technical literacy that social media have spread across society with the political commitment it takes to try and turn things around.

(Click here for the video of Eleanor Saitta’s presentation)

The first is the Constitutional Analysis Support Team (CAST), founded in Iceland in 2010 and focused on providing technical assistance to governments that are willing to undertake a more crowd-sourcing oriented constitutional redesign. Taking Lawrence Lessig’s “code is law” one step further, de facto the organization is offering a de-bugging service for policy-makers, correcting internal inconsistencies and opening the state up to citizen interaction. If we still cannot talk about “crowd-sourcing law”, as Saitta pointed out, the idea is definitely to move in that direction. Behind the project is the conviction that, maintaining a neutral approach, it is possible for a third party to provide effective and somewhat exact guidance to a constitutional committee. Saitta admits human semiotics are not so easily computable, but she argues many other aspects of a set of laws (decidability, prioritization, undefined variables) can be dealt with just as systematically as code. Considering the governments the Team – which consists primarily of Saitta herself and Icelandic-Irish information activist Smári McCarthy – works with are facing the aftermath of a revolution or a dramatic change, definitely the group’s focus on consistency can be beneficial in terms of stability.

The second project the speaker mentioned is Sukey, a network aimed at collecting ground reports on everyday instances of state control and mapping them, thanks to an analysis team. First based on Google Maps, Sukey is now using Ushahidi, while the second version will be built on top of Briar. The web app comes in a particularly timely moment, especially if we consider the so-called “Twitter revolutions” have demonstrated that 1. the clutter of irrelevant information can confuse a protest and 2. it is relatively easy for the authorities to acquire information about protesters or pollute the cloud with propaganda. By relying on decentralized networks and maintaining a specialized focus on demonstrations, Sukey makes it way more practical and secure to communicate during certain situations.

If the first project is more tailored for an group of officials, encouraging a more bottom-up approach by institutionalization, the second is more of a resource for horizontally connected actors to organize, working as a leveraging tool to balance the information sharing possibilities of the authorities. What both try to do, though, is try and speed up communication in serious circumstances, optimizing efficiency.

If you are looking for more details on Saitta’s presentation, she uploaded both her script and her slides online.