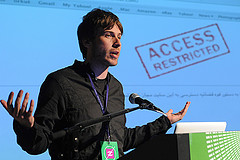 On the first panel, Software Matters, of the last day of UnlikeUs #2, Harry Halpin (pictured right) gave a passionate talk about the hidden history of the “Like” button. This history intriguingly ties together the World Wide Web Consortium (W3C), the Semantic Web, Brad Fitzpatrick, David Recordon, Facebook joining the W3C, and the relationship between open standards and “walled gardens”. Halpin began with a short history of the W3C, which was founded by Tim Berners-Lee, who wrote the original specification of the World Wide Web. He explained the role of the W3C as a sort of United Nations, but centered around the thought that it would be great if, for instance, HTML and open standards could be used by all these different companies (Microsoft, Apple, Google and so forth) without their need to constantly sue each other.

(Click here for the video of Harry Halpin’s presentation)

The Rise of Facebook
He continued by explaining the history of the World Wide Web and that it could have died a couple of times during”the browser wars”, which eventually ceased. When Facebook was becoming big in the mid-2000s, the W3C initially thought that this platform would just fade away, like most Social Networking Sites (SNS) do. At that point, some magazines were proclaiming “the death of the Web” and Facebook as the future. But the W3C had a plan: to get Facebook to join the W3C and to open up. At this time, the W3C was trying to define what the social Web actually was. As Halpin explained, from the very beginning, the World Wide Web did not aim to connect documents through hyperlinks, but to bring together  people and places from the offline world.

A wake-up call and the beginning of the Semantic Web
In 2005, the real wake-up call came when Orkut was shut down in Iran, making it loud and clear that data on SNS could be taken away from users in the blink of an eye. After this shutdown came a real breakthrough with regards to the Semantic Web. The solution, according to the hacker and open-source community, was to build a portable social network. At this time, Dan Brickle was creating an open standard for specifying a social network, using the Resource Description Framework (RDF). The W3C and RDF wanted to encode a Web for databases, where everything should be like the general Web, but with subjects, properties and values, a “Web of data”:  the Semantic Web.

Thoughts for the Social Graph – A manifesto
Harry Halpin went on to detail the further development of this idea. Brad Fitzpatrick and David Recordon played a significant role in this development, as they thought that social data was too important to be monopolized by any social networking site. They released their ideas in a manifesto called “Thoughts for the Social Graph”, which stated that they  the social graph should be a community asset. Their idea was that data should be shared between people using non-profit, open-source software. The login data of users should remain under their own control and the social graph should be portable and exportable. David Recordon, co-author of this manifesto, was at that time working on the concept of the decentralized Open Graph and he was later recruited by Facebook.

Facebook joining W3C
The people at W3C thought: “This is great!” If Facebook hires someone like David Recordon, maybe Facebook is going to open up. Recordon said to the W3C that Facebook was very interested in joining the W3C, an announcement that came with lots of expectations from Facebook, which the site never met. For instance, W3C did not expect Facebook to be so invested in the Semantic Web, which was back then considered an idealistic vision. Facebook eventually joined the W3C, a decision that was welcomed under the impression that it would lead to the opening up of the platform’s Social Graph.

The launch of the Like button
What happened next was nothing short of ironic: Facebook launched their Like Button, which was called the Open Graph Protocol even though it is not open nor a protocol. The Like button uses RDF (an open framework used by the Semantic Web), which connects different data, and combines it with the complete opposite:  the data of ‘who likes what’ is completely controlled by and closed within Facebook. When someone clicks on a Like button, the Javascript looks at the Semantic Web part of the page and ships it back to Facebook, back into the ‘walled garden’. What we can see here, Halpin stated, is that Facebook deployed open standards to build a closed giant global graph, an accumulation of data about people and products.

Personal data is the new oil of the world economy (Alex ‘Sandy’ Pentland)
What is happening here is much larger than this, Halpin concluded, since we can now see that personal data is a sought after commodity in a world still in deep economic crisis. Facebook is accumulating the life-world itself and personal data will likely be traded on markets, a direction most Web 2.0 platforms are moving into. Halpin expressed his concern and finally called for a socio-economic and political debate about the crucial issue of personal data becoming the ultimate economic motor.