Ippolita is an international research and writing collective for convivial research and writings based in Italy. It’s born of hackers that corroborate with media and media technologies as a terrain of struggles for power and control (1). Investigations and workshop topics include: (reality) hacking, free software, and philosophy and anthropology of technologies. Representing a heteronomous (2) identity of converging intellectual minds, Ippolita sought to connect ancient truths to modern day problems with a call to action: Imagine and Play Your Own Rites. 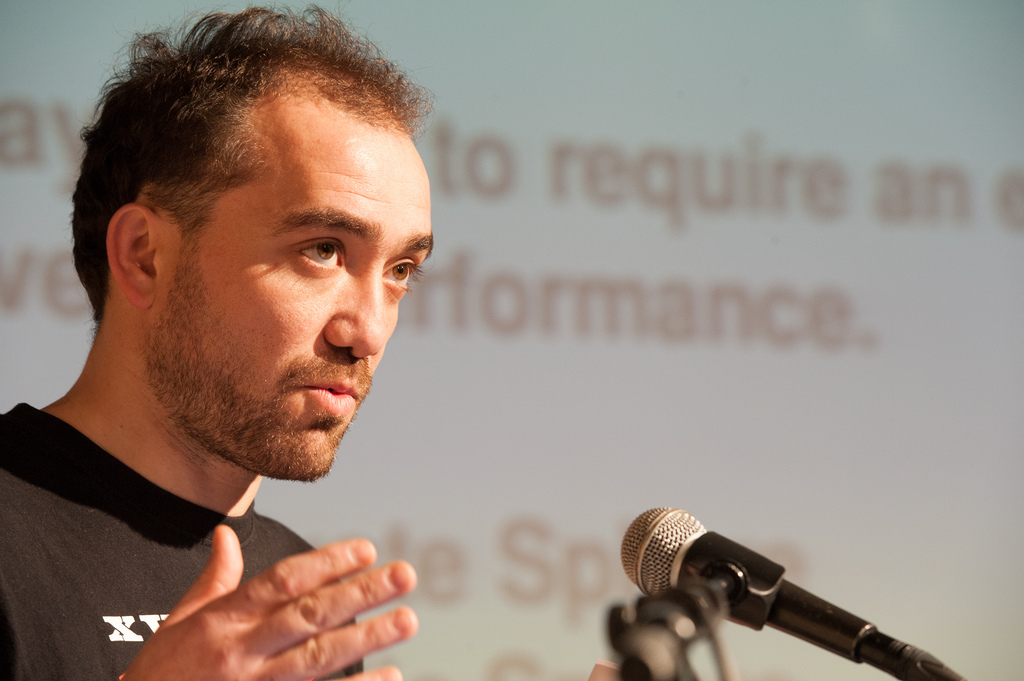 Unconscious rites or rituals that are technologically mediated in today’s performance society create precarious terms of social control. Any act of sociality is becoming mechanized (3). To begin, Ippolita prompted the audience to consider the very personal rite of introduction to those who are seated nearby. The performative nature of this act of introduction serves as a stark contrast to the performative nature of constructing an online identity. The more time that is spent creating and maintaing these digital selves, the more that digital life begins to supersede traces of identity in other “real” spheres.

The statement that public and private spheres are converging is brought about in part by the more frequent collection and analysis of data relations – the data itself as well as the meta-layer of the act of creating the data (4).  The ideology proffered by this performance measurement discards adequacy for a pervasive mantra of “more”, instilling the wisdom that bigger is better. The systems that exist to measure the performance of the greater public at large is in fact based on expertly agglomerated data, or metrics.

The mere truth that individuals are spending more time creating this data in the porous private sphere implies that they are participating in unconscious rituals. It becomes a “micro-unconscious rituals” one that doesn’t require much effort and one that is created from the habit of using technology to enter into a relationship with others. The state of unconsciousness is inherent to these habits, and the data that they record is not only useful for surveillance but for caretaking. The cliché “ignorance is bliss” is prompted by Ippolita’s assertion that habitual contributions to Big Data are used for control – guidance towards that greater good made possible by the belief in the doctrine of “more” (5).

These rituals are addictive by design –  making things happen in a predictable way is a means to control the crowd. The issue with the fact that these rituals happen unconsciously is that can’t be altered, adjusted, or given up altogether.  Acquiescence and addiction to these rituals feeds their power  – the transformation of these rites from habits to addictions prompts Ippolita to produce a re-definition: Rituals 2.0. Corroboration with these social networks as religious figures, followership of them, as “obedient sheep” only feeds the “algocracy” of Big Data (6). Freedom of expression isn’t free – it requires time, energy, and training. 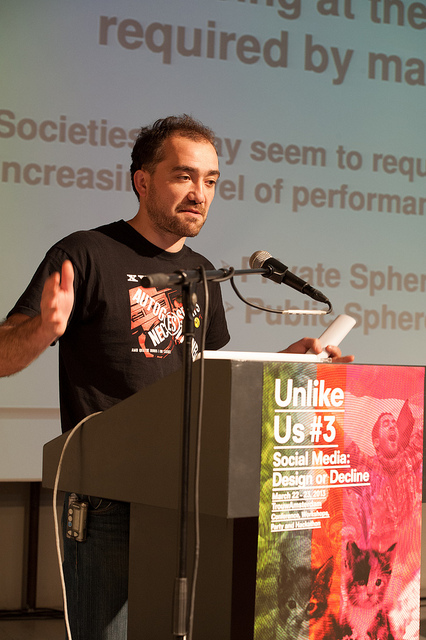 Ippolita at Unlike Us #3
Photographer Martin Risseeuw

These unconscious algorithmic rituals practiced en masse become the form and function of online liturgy, or public worship, to the unconscious – presumably leading to the title of today’s talk “Minds Without Bodies”. The various forms of interaction that are becoming increasingly technologically mediated that are devoted to and developed by algorithms are carried out via directed social networks (7). Ippolita characterizes the body of Ippolita’s work as a “post-laic” perspective, one that could be described as that of the “post-secular” society. No more priests, but there is Facebook! You can confess yourself there, and you feel better then. In fact, Ippolita even went so far as to produce a new set of ‘Commandments’ for the post-laic performance society of social network users :

Using creativity and art to disrupt the politico-economical system and the doctrine of Radical Transparency means that business processes as well as processes of cultural production are in flux. Succumbing to the need to demonstrate and present one’s identity through a continued series of torpid acts leads to the commodification of self. To incite a shift against the status quo of the Big Data algocracy, individuals must transmogrify their demarcated everyday rituals into something new and original (8).

(1) Ippolita published Open is not Free (2005, it); The Dark Side of Google (2007, it-fr-es-en); Ippolita’s independent server provides their copyleft works, exploring the cutting edge “technologies of domination” with their social effects. Forthcoming project: Rites and beliefs in tech everyday practices. www.ippolita.net / info[at]ippolita[dot]net

(2) a heteronomous identity refers to Kantian debates of desire over moral duty, heteronomy being acting in obligation to external forces rather than internal desires.

(3) In the Facebook Aquarium: The resistible rise of anarcho-capitalism: “No conspiracy, no paranoia: this is only the Digital Far West”. The Ippolita work chronicles how sociality has becoming increasingly mechanised. 159 – 165 of the Unlike Us #3 Reader cite the likes of George Orwell and Aldous Huxley to describe the ‘Freedoms of the Web’. Their text contrasts the authors accordingly:“the keys for understanding this virtual ‘freedom’ between Orwell and Huxley – the negation of privacy fostered by the Big Brother dystopia and the technological maximization of (passive) pleasure described in Brave New World. Control on the web is justified by the fear of terror, the need to defend society from threats to stability: terrorists, subversives, pornographers, and so on.” (INC Reader #8, 163)

(4) This proffers a handy connection to David M. Berry’s claims of a highly enmediated existence, where contextual computing is enabled by five forces; “computationality” (INC Reader #8, 37). Computer programming code that is sewn into visuals covertly collects data and “secretes cookies” – prompting a return to Ippolita’s words:”our everyday unconscious behaviours, a simple click of a mouse, without any thought of the consequences of the action, can have social and political effects” (181). In the words of Geert Lovink: “Sustainability is connected to scaleability. Here, we see lessons from the major social movements over the last 50 years. The force of accumulated social-political desires manifest, eventually, in national and global forums that permeate back into policy discourse and social practice…Let’s kill the click and unleash a thousand million tiny tinkerers!”

(5) In the Lens of the Facebook Aquarium explores how Focauldian biopower is embodied in posthuman society – private lives become commodities. Live feeds and data become commodities; “users become passively dependent on the tools or algorithms of power: technologies can not save you.” The authors describe “an in vitro culture” – one that Foucault scholar Mika Ojakangas suggests is an interpretation characteristic of postmodernity: “Instead of death, the focus of bio‐power is on the birth and life of individuals and populations”. Ganaele Langlois also explores Foucault’s definition of power as productive rather than entirely repressive: “the subject, in this case, the social media user, has to conform to some rules and ways of doing this in order to have the possibility to enrich his or her self. The influence of autonomist thought is key to understanding the new form of capitalism that is developed through social media: one that feeds directly off the subjective life of users in order to create the ideal conditions of consumption” (56).

(6) As artist Hester Scheurwater followed Ippolita to describe,  “we must comply to standards of behavior to remain part of the community”. The speech discusses algocracy – borrowing a suffix from Greek: “to govern, to rule” to express the idea of existing under the authority of algorithms.

(7) Although LBSN (Location-Based Social Networks) offer a bottom-up generation of database qualities based on everyday users, Leighton Evans would say that today the technology has in turn informed the interaction; top-down direction of users social network activities determine the effect of the collective power of these activities in other spheres. In fact, “the radical change of production in one sphere is mirrored in others” (citing Marx, INC Reader #8, 194) [Read more from Stijn Peeters here].

(8) Ippolita sounds off from Groningen in 2010 about “the situation on social media” on nettime:
“There we see the exact opposite of ‘making public’, as everything that gets posted becomes the exclusive property of the Facebook enterprise – just read (again) the terms of use. But how is that possible? What does mean “all what is published does not automatically become public”? Well indeed so. In almost all instances, anything happening on a ‘Web 2.0’ site turns into a multinational corporation’s private ownership. What happened is that you have actually worked, for free, for companies which seek to make money without you knowing about it, using personalized adds which contaminate you more and more. Don’t any longer complain you didn’t know!”