Miriyam Aouragh’s work with cyberpolitics in the Middle East as well as cyberwarfare in the context of Arab-Israeli conflict has revealed that even scholarly engagement ignores to a large extent the non-media ecology of the Arab activists of the Internet world. In these very special contexts, the materiality of technology is inescapable – her discussion today focuses on enlightening us with its limits. 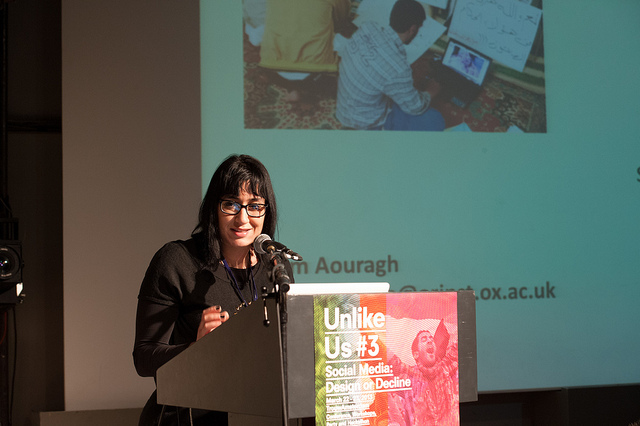 Her title includes the metaphor of Greek mythology – the comparison of social media to Damocles sword. As it relates to conflict within the Arabic world – those who are empowered by taking the seat under the sword (using social channels) do so in the constant threat of being slain by this very sword, since slaughter could come the slightest disruption.

Syrian Revolutionaries and their work for and against specific political figures has provided her and her fellow colleagues with unique evidence of how social media is simultaneously an enabling technology as well as an endangering one. She recognizes, like many of the other speakers in her panel, that the unconscious acceptance of ICT’s new liberation capabilities can be problematic. She explains the context of these developments with three premises: that this is a relatively new phenomenon with unique images; it’s potentially important because it depends on a wider balance of forces; and that the activities that are occurring are part and parcel of hegemonic state structures.

Western academia and mainstream media for long have portrayed revolutionaries as passive victims or aggresive perpetrators; there’s no middle ground but there should be. Thus, after years of struggle these Arab activists are entitled to neglect reporters, thereby neglecting those very academic and media voices that have been neglecting theirs for decades. Miriyam expresses this as “a sort of poetic justice”, now that the narrative of these agents of change are truly coming to be represented in very niche fragments of social media.

Bahrain and Syria are controlled by a sectarian minority, which is part of the reason why the regime is successful in preventing revolution. What’s interesting here is that there is a clear difference in how each of those countries are approached and discussed, according to Aouragh: “We must discard essentialist discourses, it’s a question of condemnation”. Recently, violent activities in Syria have been the focus of a heated emotional debate in Western media. Despite the fact that the influence of social media on the Syrian revolution is heralded by some academics as liberating, romanticized about the nonviolence…there are plenty of other technologically-mediated “terrible things” happening, especially regarding surveillance technologies and media censorship.

Aouragh apprises that the level of infiltration of counterrevolutionary tactics is so extreme – and not much is being heard on that in media or academic spheres. Abruptly, she pauses to consider her insight that these Syrian revolutionaries feel a sense of failure after the last two years. The Syrian state system has remained in tact – compared to the more “measured reforms” of countries like Jordan and Morocco. In fact, when it comes to these type of political discussions, Syria has always been an exception. She states that the current presidency survives by answering revolution with a reign of terror. The system of sectarian divide and rule has produced counterrevolutionary internet activities that require examination.

The nexus of her argument is that in this situation the cost of doing nothing doesn’t outweigh risk of doing something. Approximately 70,000 people have been killed since the Syrian revolution, “thus the price to pay is high”. (1) She finds it fascinating nonetheless that entirely different currents of internet politics exist within the same media paradigm. For her, the revolution has since experienced a mental shift – as she describes it: “the genie is out of the bottle, and the regime is having a hard time putting it back in.”

What Western media tend to ignore is the true day-to-day ecology of these activists is a difficult one. Her connection to the Facebook “regime” was the analogy that the Syrian president Bashar al-Assad controls the media. This is the real reason why the ecology prevents the narrative of the activists from getting out. Most of these activists must rely on alternative media forms to communicate. According to Miriyam, Syria is the only state that has an electronic army – completely focused on electronic repression that includes “hacking and attacking”. 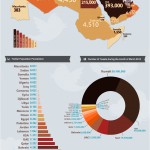 She discussed an infographic based on ASMR, Arabic Social Media Research. What Miriyam claims the issue that researchers dont want to acknowledge is that less than 1% of the Syrian population is engaged with Twitter, and this is the reality, that they represent only a meager handful of people compared to the total number of Syrian activists who are pro-revolution. Naturally, she cautions researchers from making conclusions about the impact of Twitter and social media on changing the Arabic political landscape. Reflecting that there are only a handful of topics that reach Western media, there is actually a secondary form of censorship in language barriers.

However, Miriyam acknowledges that Twitter does give an interesting view into the power dynamics between political trends online those already present in cyberspace and therefore discusses a collaborative project with R-Shief and VJ Um Amel, collecting hashtags [#syrianrevolution #assad (for example)]. The key to the data set was properly capturing the unique sentiments of Arabic and English language . She demonstrated that the sociolinguistic nature of these messages differed. Aouragh’s hypothesis is that at certain hyperlocal moments, the dominant language is Arabic and it doesn’t get retweeted in English. Naturally this conclusion is in part affirmed by the apparent nuance of comparing mainstream media to Arabic mainstream media. In some of her other publications she imparts the work of counterrevolutionary groups in broadcast pro-regime messages using the Internet.

She considers studying Arab & Muslim media is proving to be interestingly timely. The Syrian government was in fact attacked by hacktivist group anonymous last year because of the ongoing Internet blackout, but the Syrian government is still broadcasting pro-regime messages through other channels. Her hypotheses suggest that counter-revolutionary groups are overwhelmingly domestic, but are joined with other pro-revolutionary groups based in the other MENA states. Miriyam concluded her presentation with a few representative examples of that she feels aren’t represented in the mainstream media proportionate to their impact.

The sheer lack of electricity as a result of government’s ability to shut off the power on a whim has prompted activists to get creative in the ways they access the social networks that power their communication. Although the mainstream Western media has focused on this happening in Egypt and Tunisia, Syrian activists also suffer from the same instability. Her slide had a picture of Syrian activists using car batteries to charge their laptops, and mentioned that there are plenty of other creative tactics activists are using to charge their devices. (2)

What’s worse, the control of the regime can also shut off the ISP entirely. As a dramatic culmination to the theme of Riot and Alternatives, she showed footage uploaded to You-Tube of activists using non-technological communication because of the monitoring of other channels. The clip shows people of Baba Amr using homing pigeons, but ironically doesn’t represent the violent images that are characteristic of the this city in the Homs region of Syria. (3) Naturally this resonantly coincides with a key theme of the conference in understanding the power relationships between the social and the technical. (4) Read more on Miriyam’s 2012 CyberOrient article “Tweeting Like a Pigeon: The Internet in Arab Revolutions”.

The online and offline activities of Arab activists have inspired movements and incited action in places and cultures entirely apart from their own. Although the general sentiment is one of “liberation anew”, Miriyam Aouragh cautions us to focus on the disempowering implications of the Internet (5). The distribution of counter-revolutionary tools through these same online channels are typically disregarded – to understand the power structures created in the environment of Arab activism, one must not only examine the positive effects of social networks, but the negative ones as well. For more information she can be reached at miriyam.aouragh@orinst.ox.ac.uk. blog

(1) Bashar al-Assad’s father Hafez al-Assad was responsible for the Hama massacre in 1982 that left 20,000 dead. The Al-Quebir massacre of 2012 is another example of violent war in the Syrian state.

(2) See PBS on Syrians using water and batteries to charge cell phones, or The New York Times on other shortages. Moderator Mirko Schäfer tweeted about a new serious game putting players “in the shoes” of Syrian rebels.

(3) A look at the footage from the rest of Miriyam’s example video’s YouTube channel. Orienting – the history of the region with this Wikipedia article. Also familiarize with a BBC News post. The Economistalso. A Financial Times piece on the violence in the Homs region, and one from The Guardian. And Australian SBS.

(4) About, Unlike Us #3 Social Media: Design or Decline

(5) See also this piece by Miriyam, discussing the dialectics of the internet. She is from this month onward the Leverhulme research fellow at CAMRI [Westminster, London] and is beginning a new project about the political implications of the Internet during and after the Arab revolutions.