Unlike Us #3 has begun, and we start immediately with the very essence of social media, namely the conception of ‘the social’, and how this is transformed by social media today. Before we will zoom in to the practices of e.g. the Facebook Demetricator and Anti-Social Media later today, we are now still zoomed out, we see the bigger picture. Bernard Stiegler gives us a lecture about how neuropower is involved in social networks, and how we should use these kind of networks for a new knowledge politics. Hold on!

First of all, I highly encourage you to read the article of Bernard Stiegler in the Unlike Us Reader: “The Most Precious Good in the Era of Social Technologies”. In this article, he launches the concepts that he uses in his argument today. 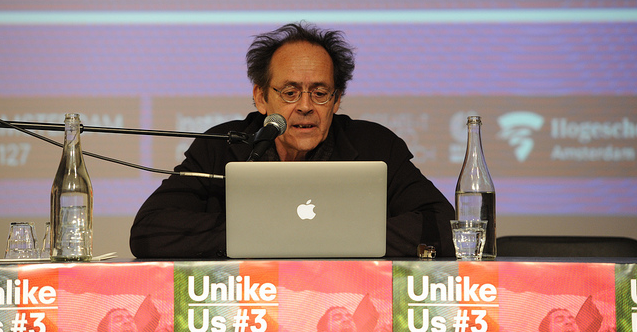 In this essay, Stiegler starts with the conception of philia, the fundament of the social. It exists because we are by necessity bound to others. Philia exists between individuals, but also between communities. In fact, it is the most precious good of individual human beings. Without it, life is not worth living. It is also the most precious good for societies, because philia constitutes linking power, which is also the power to create social networks. It constitutes a process of individuation, because one desires the other. Technical individuation both augments and diminishes psychic and collective individuation, as Stiegler explains later on.

In a social network like Facebook, one’s network of friends is explicitly declared and descripted. This description causes an alteration of what used to be understood as social networks such as a family or a school. (In fact, we were already included in these social networks, without really realizing it so much…)

So ‘friendship’ is formalized and publicized in a social network like Facebook. But doesn’t friendship essentialy escapes formalization because it is informal? Or is friendship always declared and made public?

Facebook both allows to create a profile (by self-description) and allows for dialogue. Self-indexication (profiling) is used by advertisers for ‘surgical marketing’ and causes a renewal of social life according to Stiegler. Some would argue that social networks are intensifying individuation, others would argue that the formalization of friendship destroys it. According to Stiegler, social networks could actually lead under certain conditions to reflexive individuation. It is through science that we should arrive at a kind of reflexive philia, which can be understood as the hallmark for political societies.

The descriptive grammatization of social relationships (making your network explicit on Facebook) is a process of trans-individuation. This written script intensifies individuation, but it can also lead to subjectivication and disindividuation.
By documenting the lives of people, they are also controlled (Foucault’s biopower). Stiegler warns us that in the information society of today, digitization and traceability, especially through social networks and “surgical marketing”, could lead to something that is greater that biopower, namely psycho-socio-power. 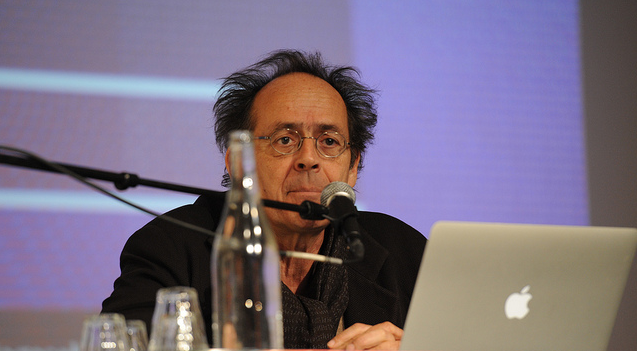 In fact, Bernard Stieglers asks for nothing less than inventing the future of social networks. This is only possible when we understand these networks as technological and social, and make these networks capable of becoming agents of reflexivity.
Trans-individuation, whilst it also creates processes of disindividuation, is also the only road towards the invention of new forms of individuation.

The challenge lies in the arrangement of social networks with social groups. For such networks, we need to create politicized communities of  friends in the social networks. They should take a critical stance regarding the conditions of their individuation. So, it is necessary to develop communities of theoretical and practical knowledge on and in the networks, to establish spaces of critique.

We are now zooming in to the brain. The audience in Trouw at Unlike Us #3, is listening to Bernard Stiegler, but everyone will hear something different in his story, based on past experiences, and therefore making a certain selection. Stiegler makes a distinction between primary, secondary and tertiary retention.

We are now beginning to see the development of neuropower, Stiegler states. Trans-individuation is transforming by the constant and systematic control of the relations between members of a social network and through the production of digital tertiary retentions by the members.

According to Stiegler, the only way to turn the pharmacological situation of social networks like Facebook around, so to establish the spaces of critique as mentioned before, is to invest in digital reticulation by setting up a process of academic publication, both from academic institutions as referring to the knowledge that emerges in the ‘republic of letters’. 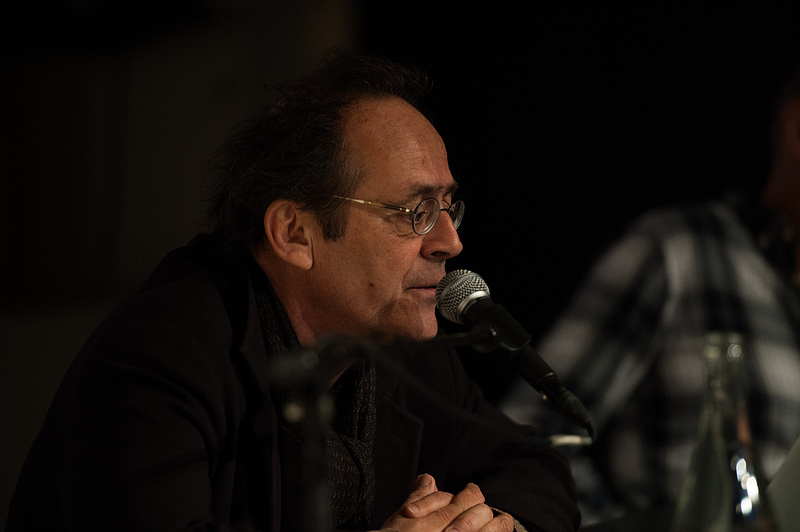 Social networks must become contributive spaces, founded on the critical production of (meta)data by trans-individuation. This then leads to a international new republic, that can only occur together with rules that must be explicit and constantly criticized and debated. According to Stiegler, we will see the third age of the web: after the age of the hyperlink and the search engine, the age of collaborative and social networks.

The challenge of social networks is thus to transform the neuropower that operates on brains and on societies, into a noopower of societies, by politically reimagining individuation. According to Stiegler, this requires the implementation of new annotational languages for the Web. He is working on this at the Institute for Research and Innovation.