This year’s PICNIC festival  spanned the theme of Urban Futures. The question on the table was how cities of the future could adapt to deal with a global population set to hit 8 billion by the year 2030. A broad variety of talks, workshops and activities were held in Amsterdam’s northern docklands in a temporary settlement built just for the event.

Urban Screens crew visited the festival, and couldn’t miss a workshop of our special interest: “Urban Screens and the Electric City“.  It took place on the 1st day of the festival, Wednesday September 14th at the Crystal Palace. Different speakers shared their ideas and at the end of the session there was a group activity to creatively propose content for urban screens.

Matt Cottam from Telart presented Soundaffects, an experiential project by Parsons The New School for Design. It takes environmental data, like weather or traffic, or even motion and connectivity,  and transforms it or expresses it with musical sounds. The idea is to let us see and listen to our environment, from a new point of view, a different way to understand our cities. Matt  uploaded some pictures of the results of the quick workshop, you can check them out in his flickr account by clicking on the picture: 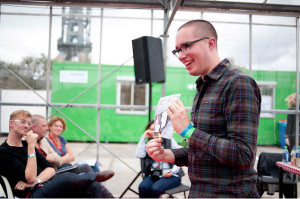 Another speaker was Maia Garau from XPlane. Their company focuses on Business Design Thinking. They combine research, collaborative consulting, design thinking, social media technology and visual communication. She made an open invite to everyone to attend their Visual Thinking School, which is open to the public and takes place every 1st Thursday of every month at their offices in Portland and Amsterdam.

Beeker Northam from Dentsu London Strategy Director was also present. Dentsu is a communication agency and they are working on various innovative advertisement projects. An interesting project by their authorship is a video which was produced using Ipad tablets to “paint” with light. You can check the make-off in the following link: Making Future Magic.

Chris Heathcote, Creative Technologist also from Dentsu noted how screens have crept into our cities. He addressed examples like the tube in London, where in a period of 50 seconds you can see 60 screens while going down or up the escalators. He also exposed the fact that there are more than 75,000 screens installed in public in the UK. Some of the characteristics that he can relate to urban screens is that they are normally silent, you can’t turn them off, they might be or not controllable, might be or not aware of you through sensors. Uses and location, he added, are important characteristics to think about, some screens are used in many contexts for many different reasons, from gyms to post offices, there are screens for information, for interaction, advertisement… some of them are even virtually unreadable because of their location, etc.  You can read more of his ideas about urban screens in the following link:  http://anti-mega.com/antimega/2009/09/30/screens-in-context