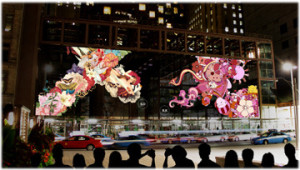 FLUXe is the name of Canada’s largest interactive LED screen installation which is located at Scotia Plaza at the Scotiabank Nuit Blanche. According to its creative director, Steve di Lorenzo, it celebrates the notion of change as a fundamental reality in Toronto. With more than 30 square meters of surface, it can be used as a canvas to paint with unique digital paintbrushes designed by international artists, including  Zena Holloway, Eduardo Recife, Lorenzo Petrantoni, Eric Chan, Christian Toth, Nanami Cowdroy, Huge Elliot,  Alex Kurina, Janice Kun, and Graham Miller.
Using a tablet, the attendees can collaborate with friends or strangers in creating their unique pieces.