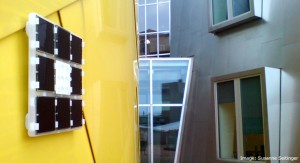 “…If you think of every light in the city, …essentially being a pixel…that is programmable, that is editable, that can transform the experience of the city… that respond to the people moving around in the city and engage in the city… This is a fundamental reformulation of the idea of ….urban lightning…  Now you can embrace every single light source, and think of the entire city as a programmable display.” -William Mitchell*

Since 2008, PhD Candidate from the Smart Cities Group at the MIT Media Lab Susanne Seltinger,  Danny Perry from the Electrical Engineering and Computer Sciences, and Dawood Rouben from the Architecture department, are working on what they call the “Liberated Pixels” project.

They are experimenting with systems aimed to blur the boundaries between what we conceive as urban lightning and public digital displays. In contrast to typical urban screens, their concept doesn’t restrain pixels to rigid frames. Liberated pixels can be applied to surfaces in any configuration and communicate with each other to enable playful patterns. A second development in progress consists of wireless liberated pixels, what they call Urban pixels. These solar-powered units are programmable and have a distributed interface which brings it flexibility.

More information and a video of the pixels in action can be found at the LabCAST webpage.