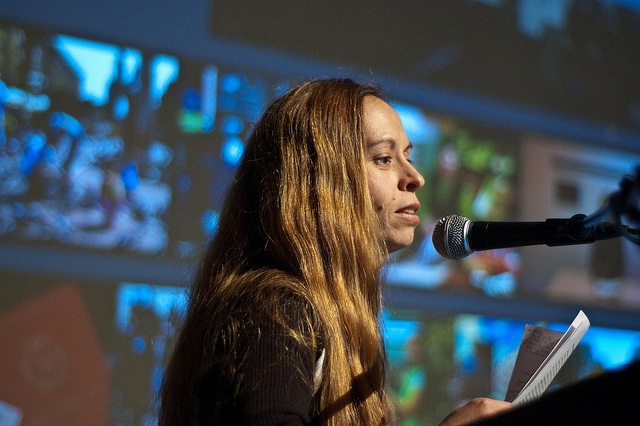 Video artist Joanne Richardson (GER) was invited to give a presentation in the session called “Online Video as a Political Tool”, beginning her talk with a critical look at the terms ‘online’, ‘political’ and ‘tool’. As Marx had wrote in the Economic Transcript, a social revolution will “not get to the next stage” when the state is used as means to overthrow the state. Here’s the opposition between Heideger (using the available tools) and Nietzsche (somehow doing something completely different) becomes relevant in considering the subjectivity of activism and the traps of deconstruction, a few of the central topics in Richardson’s work.

As Richardson was a participant in the Romanian ‘indie media’, the question of “what is it that makes our media other than other media?” started bothering her. Even more, the online tools that had been made available had proven to be largely a celebration of openness and accessibility itself. Making video users into producers would clearly not have brought new models of producing, “what makes video activism different other than putting it into the hands of the users?” To come back to Marx’ point: don’t these approaches by the masses still follow the same ways of production as with ‘other propaganda’?

After stumbling upon a film of Jean-Luc Godard that displayed a political struggle, for Richardson this was the shift from “[political] content to the mode of production.” Following from this shift of production were different strategies to depict political agendas. The first one, that of image reference, is about the relationship that truth claims. By questioning the image and the reference political film-making would act as a ‘counter-documentary’.

Another aspect, that of form and content occurs when “the form is made of elements that don’t fit, [consequently] it asks the audience to take its part and create meaning.” Richardson here mentions the a montage method in which footage from different political events are mixed together and suggest a collective social struggle while in fact the ideological contexts were hardly comparable.

In “2 or 3 Things About Activism“, Richardson deconstructs the effects of montage. In the former work, she uses different kinds of fragments which gradually fall apart and thus create a distance between the viewer and the objectivity of the image. Overall, Richardson stresses the importance of this ‘critical distance’, as the viewers “should not create identification but […] make them think for themselves and reconsider the relation to the image.”