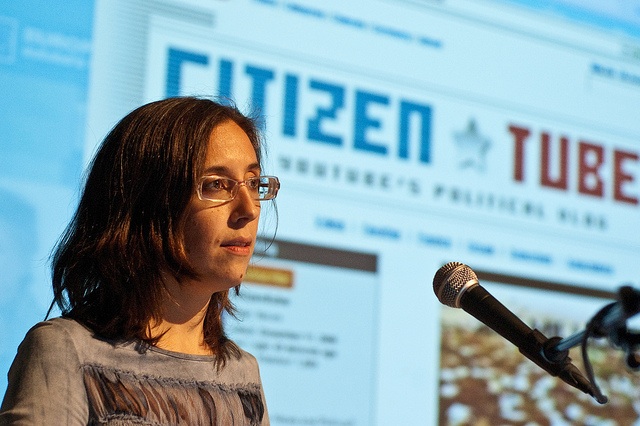 The second day of the Video Vortex conference at Trouw in Amsterdam. In the seventh session Patrícia Dias da Silva, a PhD Fellow in Social Sciences at the Institute of Social Sciences, University of Lisbon, talks about how YouTube has been embraced by European institutional actors, and how YouTube is reaching out to traditional actors and media, instead of maintaining an ‘alternative’ posture which nowadays is more connected to the Vimeo platform.

YouTube allows political institutions to reach out to their audiences in a visual and interactive way by creating online video channels, posting videos, and using the social tools around the video. CitizenTube was initiated by YouTube as a political VLog in 2008 and initially had strong focus on the US elections but expanded and grew toward a platform for citizen journalism around the world. It showed a first step towards the use of online video for a political and journalistic purpose and to engage an audience to respond, comment, and interact with the videos that are posted and perspectives that are shared.

The use and appliance of new media technologies and platforms by the European Commission was first described in the eEurope initiative from 1999. There was a strong believe the internet would revive the economy and provide new economic and political changes for Europe. A first attempt to use the YouTube platform to reach out and interact with ‘European citizens’ was the Questions for Europe channel in collaboration with EuroNews. It allowed people to ask questions by posting videos which would be answered by members of the European Commission.

In 2007 EUTube was launched after the failed introduction of the European constitution to engage with citizens and to create a community of voices. It was a first step from the European Parliament to engage and connect with European citizens by using online video and the reach of the YouTube platform. With the tagline ‘sharing the sights and sounds of Europe’ it was a noble attempt to gather the different perspectives around Europe and create a dialogue about the road that Europe should be heading. The channel launched in four different languages of which English was the most popular. The channel showed reports about the EU, people in the field working for Europe, and institutional videos to promote projects and departments.

After showing some examples of the institutional use of the YouTube platform, Patrícia Dias da Silva brings up several discussion points about the use and success of these initiatives. First, the European politicians saw and used YouTube as a static archive, as a collection of videos all stored on one online channel, instead of being a dynamic archive. It was used as an aggregation of the appearance of public figures and politicians in other news media, speeches, and personal items. For example, the channel of the Berlusconi government is mainly showing videos from his own news networks.

As a second point of discussion da Silva shows how institutional videos often disable the ability to comment on videos and start discussions with other users. So on the one hand YouTube is used to reach out and allow interaction between Institutions and ‘the people’, but the functionalities provided by YouTube are disabled. The British Prime Minister David Cameron disabled comments on his videos but allowed interaction on his personal website. A third point of discussion is the low participation on YouTube channels with political ambitions. The Norwegian Prime Minister requested video questions on his YouTube channels resulting in only 5 responses. The same was the result from a similar initiative by the European Commission and EuroNews with the Questions for Europe channel. Most videos were uploaded by EuroNews and hardly any question were uploaded by participants themselves. Fourthly, a problem faced by many channels was the flaming and trolling in the comments of the uploaded videos, an important reason to disable the comment functionality. As Margot Wallstrom, former European Commissioner for Institutional Relations and Communication, described ‘The level of intelligence is low, and closing the board would improve the décor of EUTube’.

A fifth point of discussion questioned if the channels were used for increased participation, or as propaganda channels for European perspectives and regulations. People do not believe the motives of participation but see it as government funded propaganda. The sixth, and last point noted by da Silva is the frivolous nature of some videos posted by politicians and institutions to attract more viewers and comments. As an example she refers to Spanish video ‘Votar és un plaer’ (Voting is enjoyment) video place by the Joventut Socialista de Catalunya in which a woman is having an orgasm while voting. This practice results in flagged videos (18+) and comments and discussion on the use of video by political institutions.

We can conclude that governments and political institutions are struggling with how to use online video platforms to reach out and connect with the people. As noted by da Silva, they often see YouTube channels as repositories for videos; as dead databases. They miss the dynamics and interactivity these tools provide in creating a narrative for an online audience. By engaging the public with, for example, social media tools, you can get them involved. However, people tend to see social media initiatives by politicians as manipulation or propaganda tools without a real interest in the interactive participatory side of the story. Flaming and trolling in comments, a low engagement, and the lack of interactivity, often results in declining attention from both the public and the initiators after which participation dies out. As long as institutions do not see and use the added value of online video platforms, these initiatives will fail. It would be a good strategy to look at the activist use of online video, for example in the middle east, and how public engagement results in active participation and valuable discussions.

About the author: Geert Faber graduated with a Master of Science degree in Business Administration from the Free University in Amsterdam and is currently graduating as a Bachelor of Arts in Media & Culture specializing in New Media and Television studies.