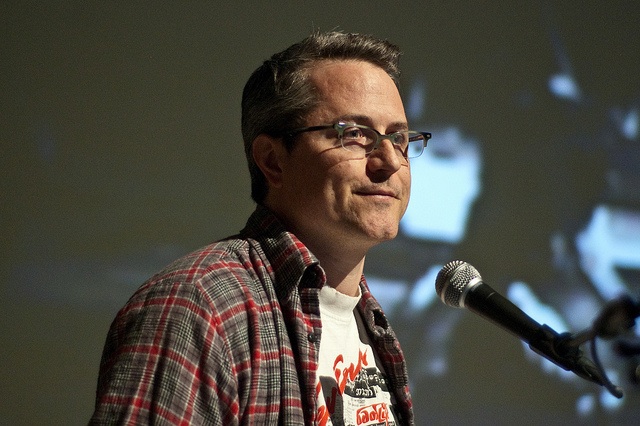 Sam Gregory, program director at WITNESS presented his thoughts on using online video as a political tool at Video Vortex #6 in Amsterdam yesterday.

Gregory began with presenting an image – a frame grab from the footage shot almost exactly 20 years ago, of the Rodney King beating by the Los Angeles Police Department. This footage, not only generated massive media attention and debate in the USA, but was the seed for WITNESS – to support the use of video in Human Rights advocacy to change policies, behaviours, laws and practices.

Video activism and video advocacy was the main focus of Gregory’s presentation.

“With the ever-increasing availability of tools to create, share everyday video; witnessing and documentation of Human Rights violation is becoming increasingly commonplace, across amateurs to professionals”.

There were two points he raised regarding uploading to YouTube. First, the ubiquity of video is not evenly distributed. Secondly, the notion of access: should it be online and will it be effective online? How will these videos reach areas where there is no Internet access or mobile access to be engaged in it?

Gregory then presented a series of videos to depict what the Ecosystem of Human Rights video looks like, made up of commercial and non-commercial platforms.

“It is as much as the individual speaking out as well as the graphic imagery” he says.

“It’s not just about the graphic violations of Human Rights such as torture, suppression of street protests; much of it is documenting economic social cultural rights: rights to housing…”.

Many videos uploaded recently have been demonstrative of the current circumstances in Egypt, Tunisia & Libya. For example the video blog of Asmaa Mahfouz, created 2 days after January 25 includes a number of moments that are already iconic even a month later in terms of incidents that happened in Egypt.

And this: The most AMAZING video on the internet #egypt #jan25

Through the recent events in the last few months, he highlights two points:

1. HOW DO WE DEAL WITH THIS MASS OF INFORMATION?
Gregory quotes Jane Gaines, who wrote in the context of the Iraq war about the prejudice of our culture being “bombarded with images”, and we never talk about being “bombarded with words”. He believes moving beyond this is critical if we want to engage meaningfully in this field of ubiquitous video.

In the past two months have witnessed the flourishing of more institutional tool-based ways to think about aggregation and curation. Tools such as Ushahidi that allow crowdmapping of photos, videos, text, Crowdvoice.org created in the Middle East, Storify, aggregates social media including facebook and twitter, and CitizenTube.

Challenges: this type of curation is good for realtime protest-based situations, but less good for collective voices, and he references the Q&A session with artist Natalie Bookchin – how an individual story/event can be captured in a larger context.

2. OUR RELATIONSHIPS WITH THESE COMMERCIAL SPACES
Gregory questions of the role of commercial video sharing and the reliance of these platforms. They are not public spaces but a private space and use of it is governed by an agreement.

He concludes with his picture of the changing landscape:

“As we think about online video, it has these modalities of accessibility, credibility, malleability, fluidity and they allow this incredible sense of transparency, participation and action, but they also raise a lot of concerns about authenticity, about point of view, about control and how those images transform into action.”