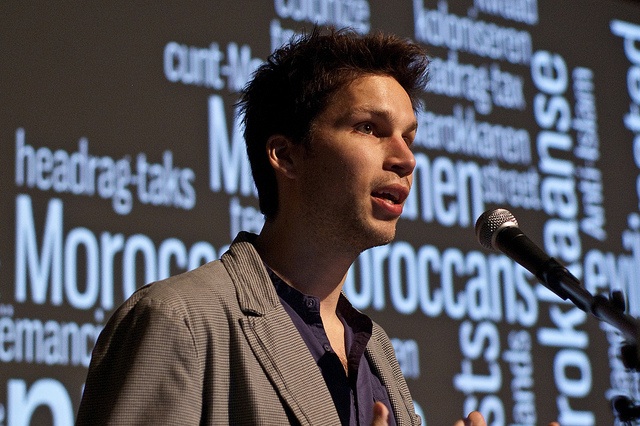 After praising the wonderful lunch that was sure to revitalize the Video Vortex audience, Koen Leurs introduces his topic: the YouTube use of Dutch-Moroccan youth, born in the Netherlands but with natively Moroccan parents. Leurs explains how the right-wing politics in Holland are casting a shadow of negativity on the former immigrants and how the media present us with a black and white image. Anti-immigration, islamophobia, ‘Kopvoddentaks’ and street terrorists have become widely known and supported terms.

Koen shows us a video, a news report about the short film “Kop of Munt” , which shares a thought as to what would happen if all Moroccans would leave Holland. It’s meant sarcastically, but the media has picked it up as a heavy subject and made a fuss.

All this negative media attention causes presumptions about Dutch-Moroccan youth. But it is interesting to see them as they really are and perhaps how they handle all the bad news. Leurs wanted to find out how they constitute their identity through YouTube.

Being a PhD student in Gender Studies at the Media and Culture Studies Department at Utrecht University, Leurs executed surveys (1500+) and in-depth interviews (43) with the subjects (Dutch-Moroccan youth between the age of 12 and 18), as well as an analysis of the digital material. He found that the DM youth use YouTube more often than Dutch youth and that it’s more woven into their everyday life. He also found that there are three ways of consumption for the DM youth. First, the nostalgic, ‘vernacular spectacles’. It is nostalgic longing for a home that no longer exists or has ever existed (Boym 2001). YouTube is their home in a sense, as the youngsters are ‘watching movies about where we come from’. The clips are symbolic anchors, a symbolic travel to a real, and at the same time magical place. Second is the consumption of differential music, ‘video’s of affinity’, such as those of Ali B and Yes-R. Third there is the knowledge brokering, which stands for a more broad and globally oriented consumption. Important to note here, is that this assumption parallels with the three types of orientation for migrated youth that Hepp, Bozdag and Suna found: origin-oriented, ethno-oriented and world-oriented.

What’s most important is that the Dutch-Moroccan youth doesn’t fit into boxes. They constitute their own identity, for a portion through the use of YouTube and other media, and combine practices and the best of three worlds (past home, present home and global culture). Above all, they watch clips that do not correspond with the negative mainstream opinion at all. Yes, they are positioned in a situation of in-betweenness, but the Dutch-Moroccan youth in Holland knows its way around the web and consumes what it likes best, not willing to apply to the negative public sphere.