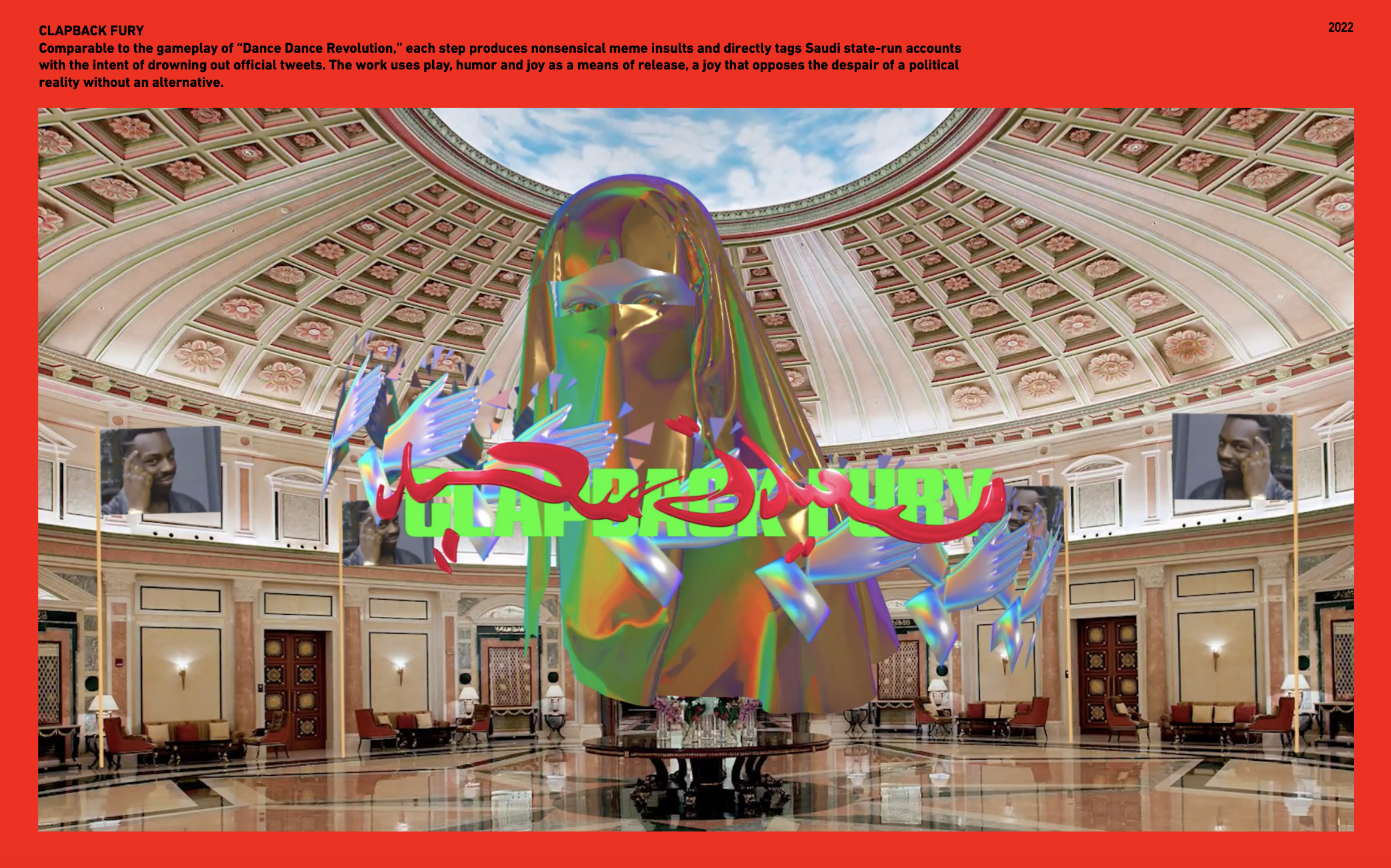 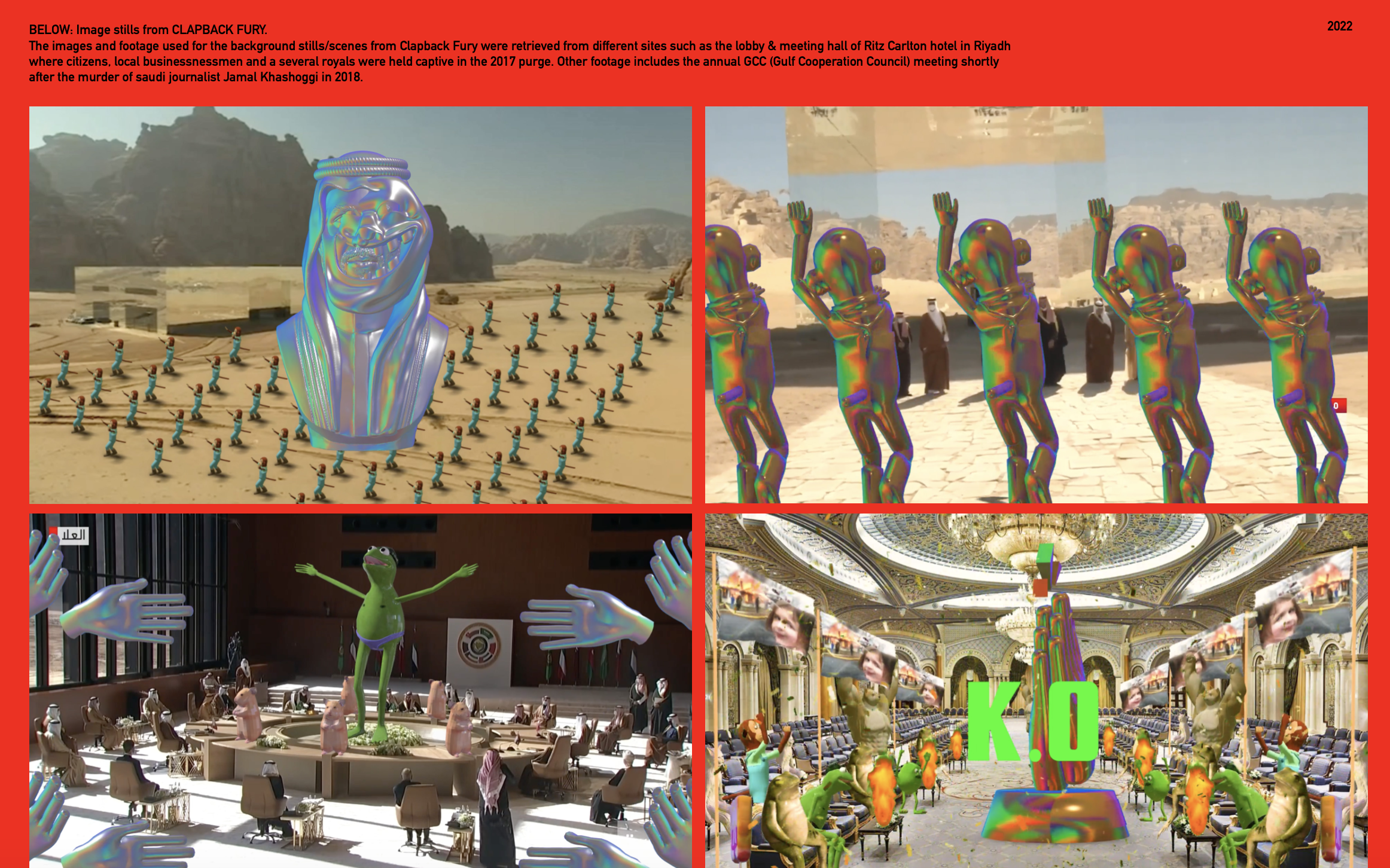 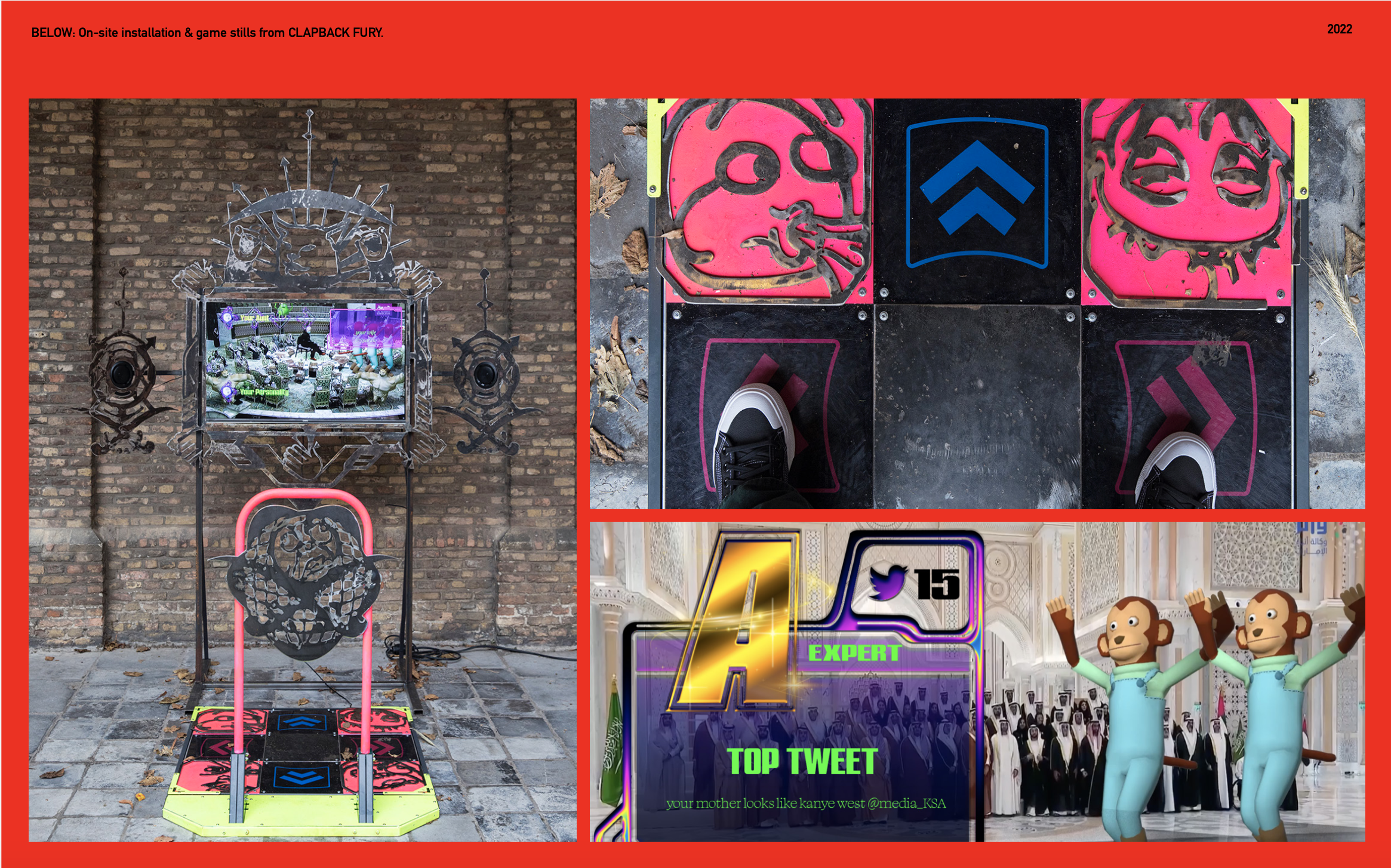 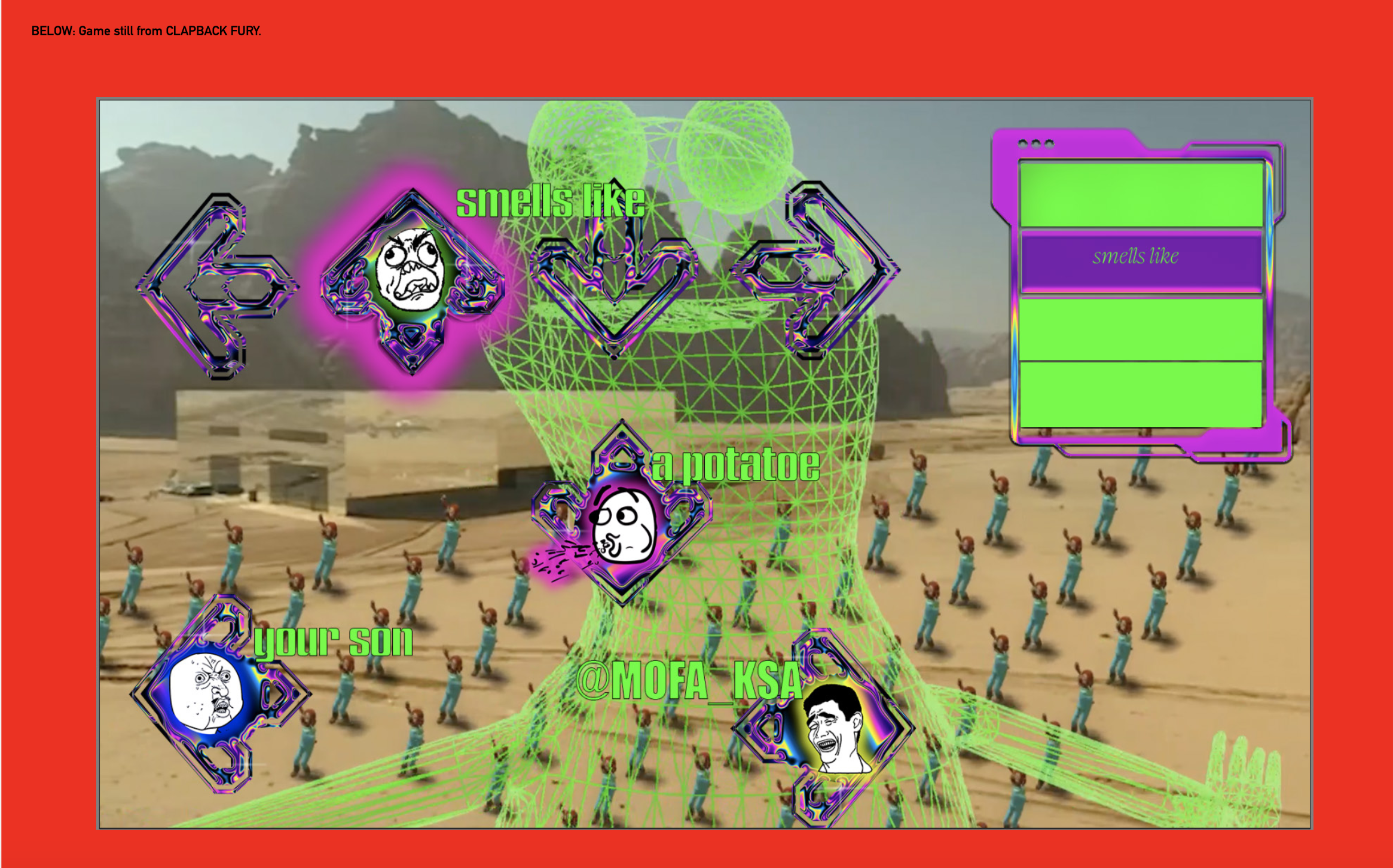 In 2018, the state-supported Saudi Electronic Army created thousands of fake Twitter accounts to promote the veneration of rulers both online and offline. Similarly, in 2017, legislation was put in place where “retweeting narratives that go against the state, the royal family or religion” is seen as an act of terrorism punishable by a thousand lashes and a 10-year jail sentence. Critics, both in and out of the kingdom, end up harmed with their families and friends threatened, shamed and harrassed.

In response to this reality and throughout her practice, Saeeda Saeed (b. 1988) has been devising counterstrategies to somehow disturb these well-oiled machines. Especially with the constant loss of both physical and digital autonomy for individuals around the globe, she attempts to claim some semblance of control through the rhythm and dance piece, Clapback Fury. Comparable to the gameplay of “Dance Dance Revolution,” each step produces nonsensical meme insults and directly tags Saudi state-run accounts with the intent of drowning out official tweets. The work uses play, humor and joy as a means of release, a joy that opposes the despair of a political reality without an alternative. 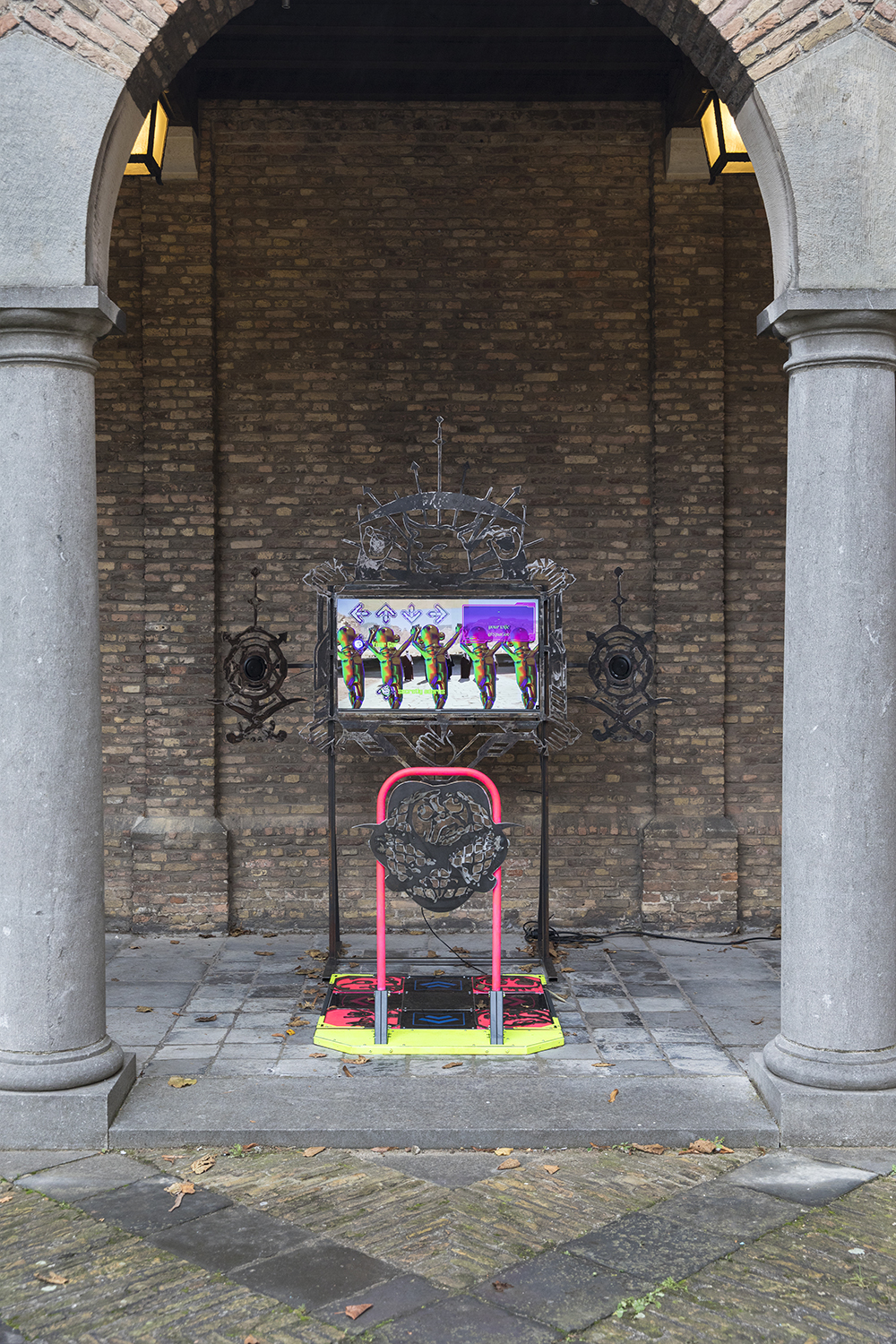 The power of memes has developed beyond virtual images. The distinction between the virtual and the ‘real life’ no longer applies, or perhaps never really existed. The effects (or should we say affects?) of memes move through digital infrastructures, policies, regulations, agencies, and bodies. How can we democratically and collectively design memes as an active [...]

Several months ago, I was having a conversation with my friend Chloë about the future of memes and she asked me what my favourite meme was. The question stumped me at first, because how could I pick one? My brain is a meme dumpster, where families of memes exist in chaotic harmony, and trying to [...]

Call for Proposals – Memes Beyond the Image

The Institute of Network Cultures is looking for theorists, researchers, journalists, artists, activists, designers and other creatives and thinkers that are working on meme studies and practices, that want to participate in two upcoming events: A workshop during the concluding programme of the Berlin Transmediale 2021–22 festival at Transmediale Studio in Berlin on the 27th [...]