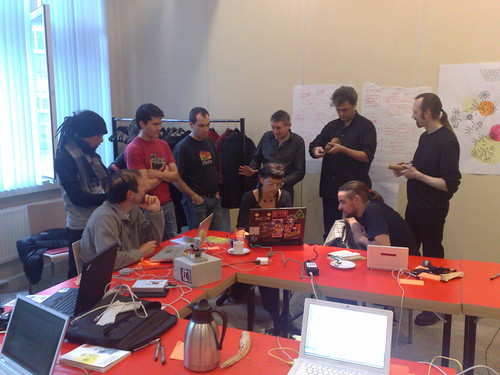 Bricolabs is what could be described as a distributed virtual network, existing of autonomous nodes all working on projects brought together by their shared values. Winter Camp is in fact for many of the members the first time they meet in real life and the different nodes in the Bricolab network normally communicate primarily via the mailing list. However, they are now at a stage where they have to deal with more centralized institutes and this pushes them to critically think about how they should move ahead as a network, how to professionalize without losing the autonomous distributed character of the network.

At the first day session, the group at Winter Camp worked on building their external profile (Hello! This is Bricolabs), meant as a window through which communication with more traditional institutes would be possible. Through a website, a one-page presentation text, a wiki and possibly a homebrewed Brico-facebookesque social networking site, the Bricolabs profile should avoid pointless communication about institutional issues often experienced by members of the group in their personal communications.

Constructing such a profile however posed some really interesting challenges for the group, as in the act of construction, it would also mean they would have to think and work in a way they would normally not do. The concept of having some kind of hierarchy or even power connectors within the network resulted in quite direct resistance or jokes about someone being “boss”, not necessarily relating to the proposed solution. The group expressed that in fact there is no Bricolabs, as all members are located in different networks, it’s more a meta-network, not independent but interdependant.

The Wintercamp graphics are not spared from scrutiny, as one of the members made a real effort in connecting all the nodes on the poster to one another, stating it’s not reflecting a real distributed network but a hip fancy one. 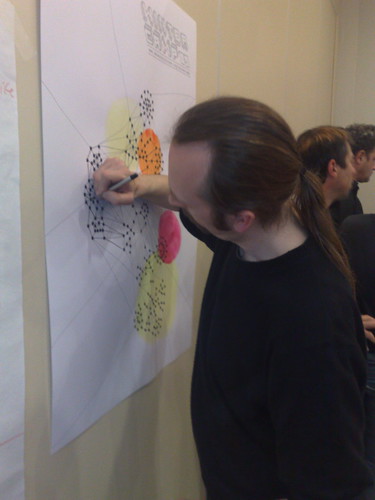 Really being a distributed network and being able to use it as a powerful tool for value-based world domination however does raise some important questions. How for instance does such a network deal with conflicting values, does it exclude them or include them, how are these borders defined and does it hinder the idea of openness? Can a network be truly democratic when all nodes do not contribute evenly and how does one deal with decisions within a setting such as Winter Camp? Is Bricolab what is present at Winter Camp or does it also need to include the extended Bricolab family? There are no clear-cut answers to this, but Bricolab does seem to favor the idea of a gut feeling of openness based on principles or core values and include everyone by technological means such as streaming video and the mailing list. 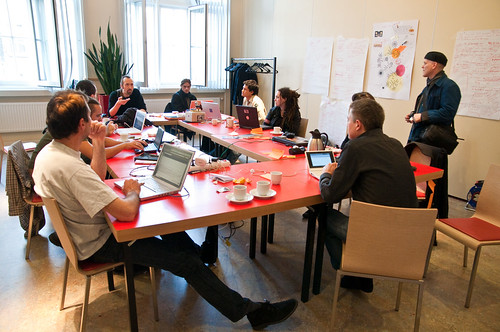 The non-hierarchical approach has a real attractiveness to it, everybody works on their own project and collaborate with whom they want to without having to go through layers of decisions and permissions up in the tree. It’s more a “What do you think?” kind of attitude, a recommendation type of validation of work. Overlapping projects are seen as contributions to the different approaches instead of a waste of resources. All the members work together from their own field of expertise to build towards the development of better technology and the accumulation and dissemination of information based on shared values such as respect, openness, passion and relationship. As a meta-network of specialists and passionate people working together for a common goal Bricolab is able to output some amazing projects and collaborations. To end with a comments from the plenary session, the difference between (de)centralized and distributed networks might just be that one is more efficient and the other one is more democratic. One to give people a voice and the other to efficiently manage large groups and projects. 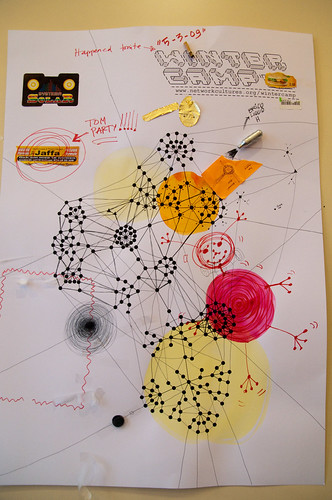