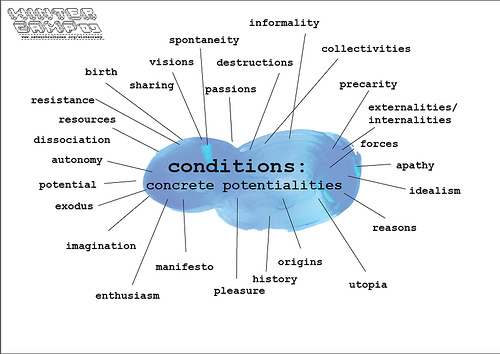 During the first plenary meeting of the participating networks the core issue of the conference seemed in need of discussion. What is a network? And, on a more personal level, are we on the same page when we discuss networks? Do we use the same vocabulary and frameworks and can we reconcile discrepancies between preaching and practicing?

One of the mycreativity participants elaborated on this last question by pointing out that their mission is not per se to keep networks alive but that a network “is a tool for getting something done”. Yet he allowed for theorizing by stating that it is paramount we (Wintercamp) open up the definition of networks and try to understand the spectrum of possibilities for network creation and description.

A very appropriate case in point to illustrate untranslatables (in discussing networks) was made when Blender’s lack of an intuitive user interface was put forward as the reason for its network’s homogeneous population solely consisting of programmers. To this someone replied that there is no such thing as an intuitive UI, and although we started digressing at this point, an important issue had been touched upon, are the various networks present open enough to invite others to think along and learn?

With these tensions and questions recognized the remainder of the plenary session was used to further refine the glossary but also to help other participants to get to grips with the various subtleties of the current networked condition. From a political/ideological perspective we need to address the question what role regional solidarity plays in our post nationalistic tendencies to form transnational networks and whether anything is actually solved by this shift? (Probably not.) From a conceptual point of view we should consider the notion that nodes in a network need to necessarily be people and from a technical angle we can ponder on the popularization of the limited linking processes as seen for example in social networking sites.