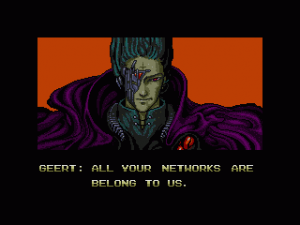 This post is partially based on an interview between Gabriella Coleman and Aymeric Mansoux (GOTO10) that took place on the first day of Winter Camp.

Aymeric Mansoux is both artist and musician. His main interests revolve around online communities, software as a medium and the influence of FLOSS in the development and understanding of digital art. His favorite projects is Metabiosis (in collaboration with Marloes de Valk, who is also part of GOTO10). Metabiosis is an artistic experiment for those who are curious about so-called generative and self-organizing systems in the ever growing ecosystem of connected machines.

In 2003 the two friends Thomas Vriet and Aymeric Mansoux (both from Poitiers) decided to combine the best of Anatomic (by Sher Doruff and Guy van Belle) and the Futuroscope. The outcome was the GOTO10 collective, a group of international artists and programmers, dedicated to Free/Libre/Open Source Software (FLOSS) and the exploration of the blurry line between art and software programming; a platform for ideas.
GOTO10 was also created as a reaction to the art scene of that time, in which writing software was almost never considered to be an artistic practice. The collective has no physical location, except for the servers (which they call ‘the playground’); the collective exists only within the decentralized network of machines, in mailinglists and IRC, Wikis, the Ticket System and biannual organized meetings.

Entrance to the collective is only granted to friends of the group that have proven their abilities and insights in collaborative projects throughout the years. This creates a highly comrade-based dynamic within this group of predominantly black haired man. GOTO10s current amount of members is 11 (+one), but the number has fluctuated and is subject of debate. In the collective, there is no need for anybody to do anything, except for basic housekeeping, which means the maintenance of bits of software on the server, the documentation and archiving of projects and the drafting of CVs for applications. The handling of a project depends on the members that want to participate at any time. Stress is dealt with very effectively; when a key-participant is too busy, the project is put into hibernation. This is mainly done because the entertaining and friendship aspects of the GOTO10 have proven themselves the most fruitful components for labor.

The survival of GOTO10 has not always been as natural, unforced and easygoing as it sounds. The collective has struggled through growing pains that were accompanied with their usual identity crisis: was the collective running to become a professional organization or should it stay GOTO10 (‘the family’)? The crisis lasted for 2 years and led to the unloading of some of its members before finally resulting in the decision to prioritize a friendship. Even so, the collective is still figuring out their actual identity and formation. Because GOTO10 has decided never to turn into an institution, the collective is always looking for collaborations on bigger projects. For example they once ‘out-sourced’ part of the “make art” festival to Piksel, and often work together with curators and producers who help them with funding. They are, as they say themselves, a migrating laboratory’ that ‘puts Trojan projects inside other projects’.

At this point, GOTO10 survives on big and small funding; their servers are for instance donated by de Waag, Bek and DEK Space, whereas the “make art” festival was once funded by the French DICREAM fund and the latest pure:dyne by Arts Council England. GOTO10 also tries to redistribute resources to other collectives, like for instance free streaming services.

During Winter Camp, GOTO10 plans ‘to have several group hugs, to eat tons of stroopwaffels, to gossip about every networks and drink beers.’
They will also try to resurrect their initial (and since then ever-hibernating) project GOSUB10, a FLOSS-based netlabel, and work on Art.deb, a file package repository of FLOSS art.