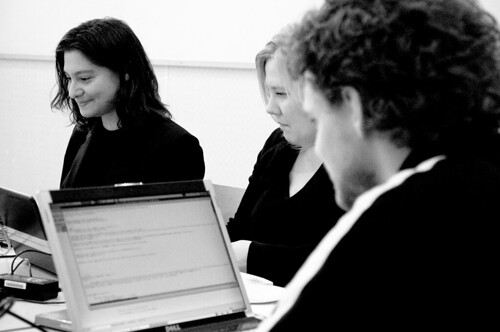 According to their website, Microvolunteerism Project is an initiative of volunteers which aims to facilitate effective distributed volunteer work, captured under the term “crowdsourcing.” According to Wikipedia, crowdsourcing is

the act of taking a task traditionally performed by an employee or contractor, and outsourcing it to an undefined, generally large group of people or community in the form of an open call.

Their website, currently a semantic wiki, brings together not-for-profit projects and volunteers, with the purpose of creating a community that can mutually support each other.

The group of volunteers themselves all physically came together for the first time at Winter Camp, with a busy and well structured agenda of discussion. Several issues were prominent, such as: social infrastructure, models of organization and leadership, inter-organizational collaboration, and technical infrastructure.

Since Microvolunteerism works with individuals in an extra-monetary economy, the issue of what resources and compensation Microvolunteerism can generate for volunteers has come up. A more important challenge than attracting volunteers for the network is maintaining their interest to participate in “microprojects.” The issue of maintaining volunteer involvement has been related to several other issues, ranging from defining a clear organizational identity, to ways of motivating volunteers by making their benefits clear, finding a way to offer feedback for their interventions, or maintaining the possibility for volunteers to make suggestions at any level. The group also admitted social recognition to be a huge factor of reward worth taking into account. 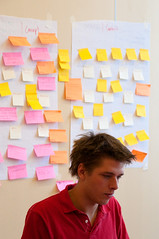 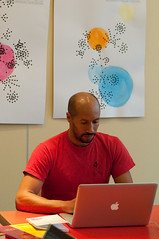 The choice of projects is also considered to be an important issue motivated by recognition. One point of discussion here was to choose those projects that take place in a context which makes successful interventions possible. Although the organization currently supports any type of projects, the possibility of creating a pattern in the choice of projects, finding a niche for projects has also been touched upon.

Another important issue on the group’s agenda this afternoon at Winter Camp has been models of organization and leadership, in terms of opportunities and limits of each model. There has been an oscillation between a well defined and documented organizational identity, which would support advocacy goals of the network and would facilitate inter-organizational relations, and a lower profiling strategy, which would permit the network to maintain flexibility of choices.

In terms of governance, two options have been discussed: centralized, hierarchical, and ad-hoc leadership. The discussion focused around opportunities and challenges of each model. While individuals and organizations take more notice of a stable organization, and a stable organization can facilitate relations with governments because of its well-defined identity, they concluded by opting for a more flexible structure, which combines ad-hoc and centralized management, core and periphery, according to the context of the project. Regarding the issue of “institutionalization” of networks, one of the member’s stand was that institutionalization is inevitable for any group which establishes goals and means to achieve them. In relation to leadership models, a particular concern was their effect on creativity, and how to maintain creativity in hierarchically managed projects. 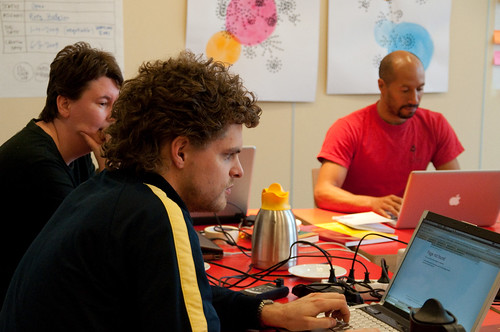 The technical infrastructure is one of Microvolunteerism’s main points of discussion during Winter Camp. Their current platform is a semantic wiki, which the network plans to replace in order to accommodate their evolving objectives, as, for example, to enable a type of sharing of volunteers between several projects by providing a resource, a tool for people who need volunteers. One of the options discussed for technical upgrade was the a platform currently developed by Mediamatic, AnyMeta/ Open-CI.

The most important project which the group is currently involved in is the Visible Difference Video Project, a cross-cutting audiovisual component for a human rights platform. According to Michael, member of the group, the three phases of the project are:

Overall, this afternoon session seemed a productive one for Microvolunteerism, a group which started work at Wintercamp with great enthusiasm, also determined by the fact that this is the first time where the entire network is physically present in the same location.