At the second ‘official’ day of Winter Camp I joined the morning session of Creative Labour.

Creative Labour is part of the Euromayday-network, a network that is mobilized around the first of May, as a day to reclaim rights for the new generations growing up under a new, flexible labour regime. 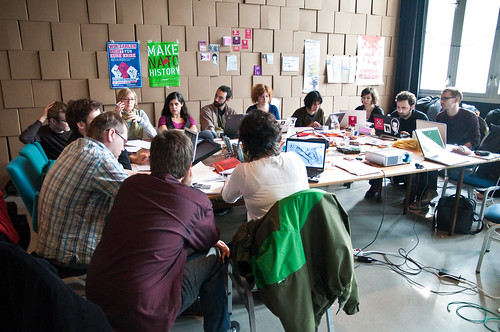 In the middle of a big room is a table with 18 people around it, from different backgrounds. On one side of the table I hear Spanish, and other the other side German is the most spoken language. The discussions are held in English, more or less. Right after entering the room, a series of presentations starts. The group exists of different ‘project groups’ that present the work they are doing. No time to grab a cookie which the table is filled with, next to several flyers and laptops. 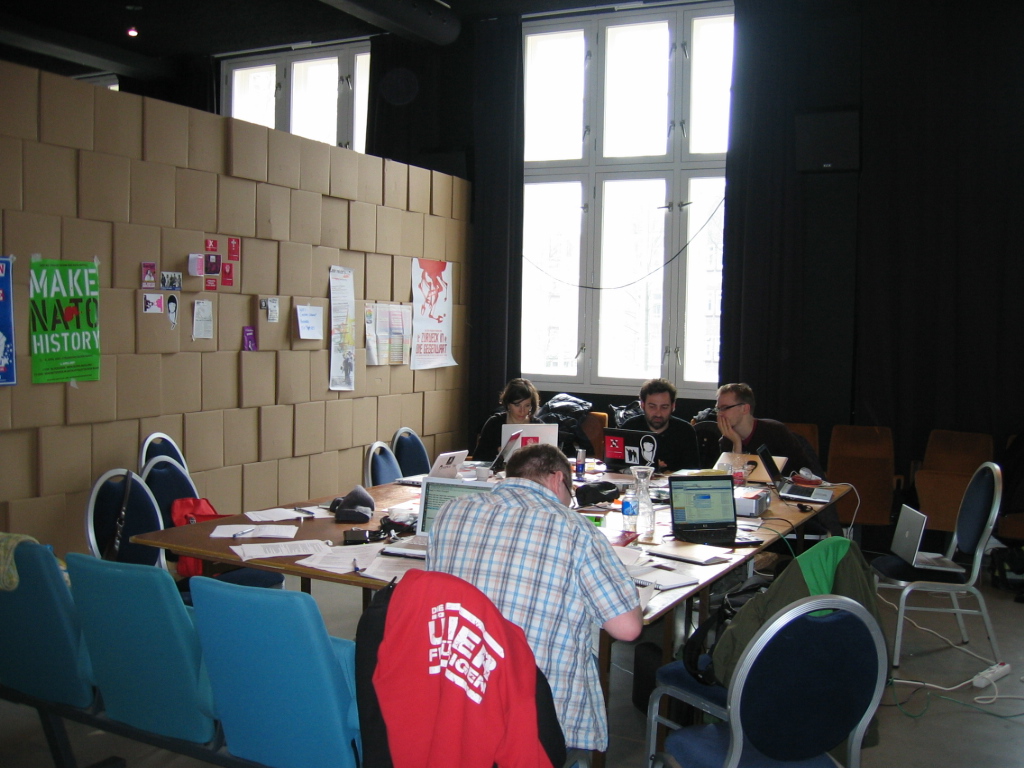 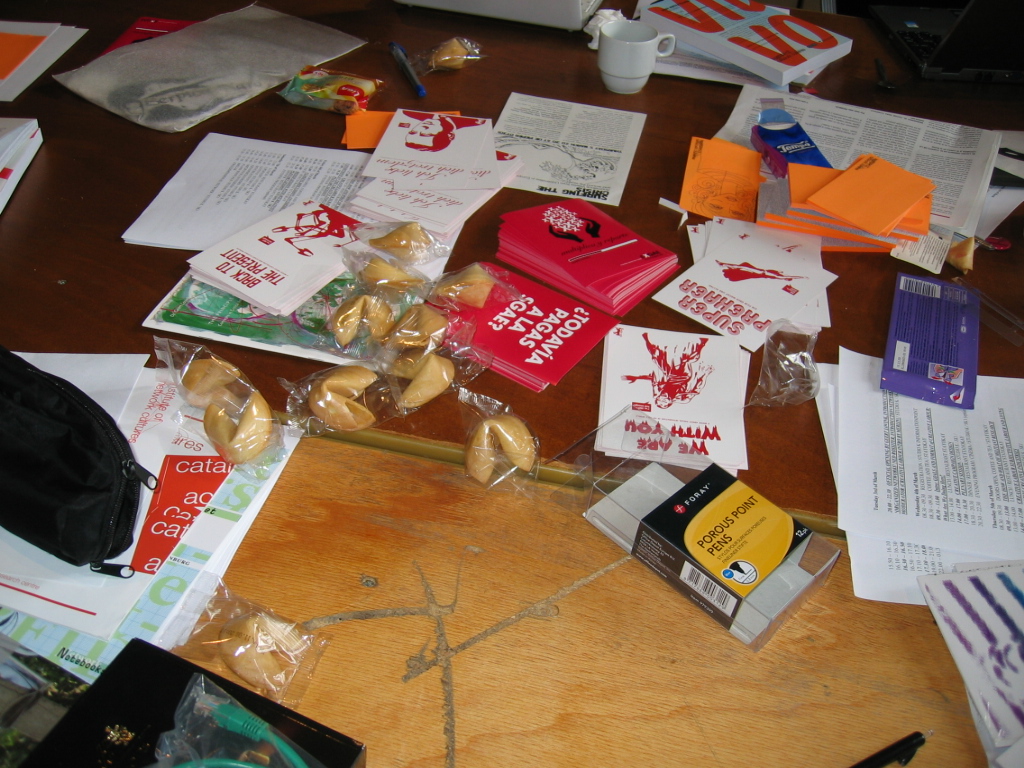 The first presentation is from Joan [Universidad Nomada]
This is a social movement about action and Creative Labour. Joan talks about different seminars they have already organized, or are organizing in the coming months. The movement focuses on militant research. The main goal with this is not to create an object of study, but to situate knowledge. There is a transformation going on in the world. During the 50’s and 60’s it was quite clear how labour was organized. People were working in a factory and it was possible to do militant research in that factory. It was easy to ask the workers which conditions of exploitation they suffered. Any kind of claim was used to extract information and to organize the workers.

But these days, the way of production has changed. Production is happening all over the city, so militant research is everywhere, but at the same time nowhere. It is also often not accepted to ask people about their working conditions. For Universidad Nomada, the starting point of research are now social centres, or at least organized places, to do the militant research. It is important to start from an organized or collective ‘thing’ or centre, because precarity is important. It is not about economic claims, but about culture. It is easier to find answers against precarity in an organized context than in a work sector.
One of the things Universidad Nomada is working on is helping people that have problems with housing, labour and undocumented migrants. People can get free consultancy at their organization.
After this a cartography is shown, which the Creative Labour group made yesterday. It depicts different important subjects, and places. 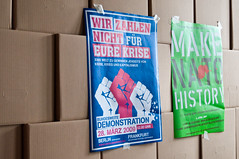 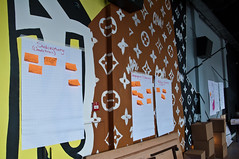 The next thing Universidad Nomada is going to organize is a set of conferences about the crisis. This will allow them to put out messages that will circulate on a higher level. They have several institutions that would like to join, like the Social Centre in Madrid. There will be a new form of corporation between social institutions that will give other ways of empowering. The crisis-context allows to also combine the social map of things.

In Malaga there is the ‘Casa Invisible’. This is a building that is squated and now serves as a meeting point. It is a self organized product of common. One of the main advantages is that you can go there to meet people. It has a free internet connection which is uncommon in that region. The idea of squatting a building was born during the Filmfestival. ‘Regular’ people have their place to go and as a counter-action they squatted the building.

To continue the work they are doing, it is needed to learn more about institution models. This lead them to organize another seminar next May about institutional models of different cultural institutions in Europe. An example of such a model is for instance the cultural governance model. There will also be workshops about how to start militant research. They are starting a process of reflection what militant research is because there is need to decolonize knowledge.

After this Toret decided to give a short presentation on Casa Invisible as well. This part was a bit harder to follow because Toret only speaks Spanish. There is a translator in the room but that still isn’t enough for me to get the whole idea of what he is saying. What I find interesting is that all the people in the room seem very passionate about their subject. As a person standing on the outside of all of this, it is hard to follow.
According to Toret, Casa Invisible gives attention to people that are normally invisible, like squatters, workers and artists. The project is about using creativity and talents of all these figures and mix it to create a new space, a common space in the city. They are also planning a 2.0 version of Casa Invisible, to allow everyone that is working on the project an income. They are working on getting together a body of rules and protocols to allow that the public is settled/consolidated into one body. 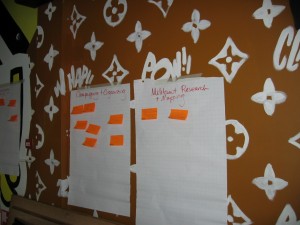 After these presentations the setting was changed a bit to get ready for the next presentation from Arndt Neumann, Christoph Breitsprecher and Lena Oswald from Germany. They did a project which is called ‘Mir reicht’s nicht’ [enough is not enough]. This is a research from Euromayday, held at the Berlinale and documenta in Berlin, Germany. More information can be found on their website:  mirreachts-nichts.org. The presentation they held was pretty clear, divided into several question that were answered.

1. Why did we start the campaign?

They started the campaign to get to know more about precarious conditions at the events. They started the project in 2007. The goal is to go beyond symbolic forms of politics, although in a German context.

In 2005 people did not much talk about precarity yet but this changed quickly. In 2007 everything was already different and even mainstream papers and tv-stations were talking about precarity. But the problem with that is that these contexts mostly present a problematic image. There are two points that are talked about often. First, about people who are permanently unemployed and second, about young academics who are starting internships that are not paid and who don’t have enough money to support themselves properly. These are two elements of a social trend, but the discussion should not just evolve around these subjects. That is why ‘Mir reicht’s nicht’ decided to intervene in this discourse and make the conflict clear and react to this conflict collectively.

2. Why did we use research as a tool?

They were not ready yet to make big claims about precarity. They needed to do research first to get to know more about the situation of precarity at that time. There are things happening but those are not clear yet. The starting point is that we change the way we live and work, and the politics that we work with. There is a crisis in political activism. One of the main causes is that political activism needs a lot of time and, time is limited. In the past, people were living on welfare, so there was time and money for activism. But this welfare is not enough anymore.

They used research as a tool to find new forms to organize. They started with interviews. Just spread out the interview under ‘precare’ people and start talking about subjects that are normally not talked about. They did not do the research in an academic way but made tools to create new social relationships and to reveal collective conflicts.

3. Why did we choose ‘Berlinale’ and ‘documenta’?

Events like these provide places for interns. At the same time, this is also interesting for cultural knowledge production. And third, of course, it is nice to make use of the public attention.

4. How did we act in the Berlinale and Documenta?

Our main goal was to look at the working conditions. They started interviewing people they already knew and through these people they got to know other workers. They asked these workers about work conflicts, desires and what kind of campaign they would design if they would have the chance. All together, they collected forty interviews with different people. After collecting those, they were not sure what to do with the information. Originally they wanted to organize public meetings in which they would form a manifesto.
Eventually they decided that they would take interesting quotes from the interviews and to sort them according to topic. The most interesting categories were: promise, burn-out, money, life, time, conflict and strategies. They invited the workers that were interviewed to discuss.

In 2008 they entered a second step in the campaign. They started interviewing at the Berlinaler but with another approach. They made a wheel of fortune with questions on it. You’d have to spin the wheel and you could either win a prize or you needed to answer a question. The main event at the Berlinaler was the ‘Gala of Precarious Perspective’. During the screening they rolled a banner over the screen saying: ‘It is not enough to be a supporting actor of my life’. They also handed out fortune cookies with quotes from the interviews.

5. What were the results of the research?

There were six main results [Unfortunately I only captured four of the results]. For example, conflict promise and economic force. The pressure on people working at the Berlinaler and Documenta was immense, so they couldn’t do a good job. Second, there is also a strict division of labour. They have to perform unqualified work. Third, there is fragmentation in the working conditions. There are different kind of tasks for interns have to perform. Fourth, the ambivalence of networks as there are a lot of different networks.

Eventually, doing the interviews turned out to be a good way of researching. This, for three reasons.