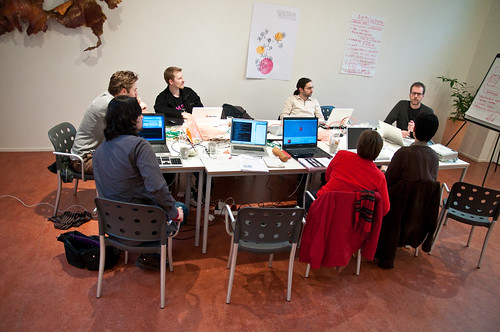 When you enter the domain of the Blender network, the first thing that strikes you, especially when compared to many other networks present at Winter Camp, is their level of professionalism. Their meeting consists of elements such as targets, planning and design&development problems/solutions. It’s clear they have a common goal, a product, intersecting at a common believe in the strength of the open source method.

Blender is one of those networks that do not reflect much on their own network topology on a conscious level. For them the questions raised at Winter Camp are for a great deal obsolete or too theoretic. One of the main developers for the Blender Foundation, Tom Roosendaal, believes (although brought in a humorous way) that once you start reflecting on what you are, what it means to be a network, it’s the end of the road, its gone. Going into the discussion of what kind of network they are, does, however, bring to the surface some main topics of Winter Camp; what are the dependencies and constraints of a distributed network diagram in relation to being able to professionalize. What could be a possible business model for new networks of production?

Blender is an international group with members from all over the world working together on the free open source 3D content creation suite. They work on products online and have offline conferences where they join up to have more hands-on sessions. Although the group is managed by Tom Roosendaal, and the Foundation does seem to have some authority concerning planning, at the same time the way they work is very distributed. The members work autonomously to tackle their own part of the puzzle, sometimes to improve or customize their own in-house release of Blender and sometimes to work on shared project such as the animated movies series.

Rosendaal’s way of managing the team is based on finding a balance between setting specific targets in the near future, having long term goals, all grouped together in projects where it’s fun to find solutions to complex problems. An example of this is the animated movie Big Buck Bunny, where the characters had to be hairy furry animals. Making those hairs move as envisioned also means solving complex development problems. The upcoming project will be more of an action movie with kung-fu fighting and other nice heavy action stuff, undoubtedly posing more interesting development challenges.

Hearing that some of the members also have a daytime job, gave the impression that they might be working for free. This is however not the case, there are some different models working simultaneously so their work is rewarded properly. One member for instance is working for a company which is using Blender software. At the same time he is a developer for Blender which actually allows him to work partially on the Blender project within paid working hours of his company. Another one of the members is a graduating student, being financed by the university to work on Blender.

Overall I believe that they have found a nice balance between using a more hierarchical structure to drive the projects and retaining the distributed structure so that people can work in a manner they feel comfortable with. In the end, I believe that its good to think critically and theoretically about new networks, but it starts with having a good platform and a motivated community. 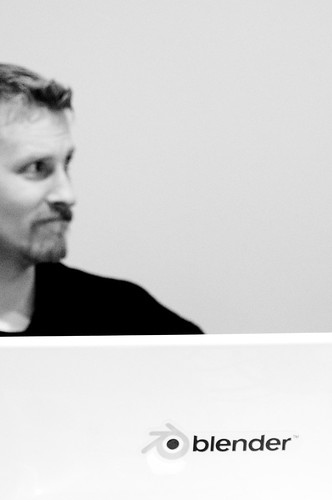