On the afternoon of the second day of Winter Camp a fruitful encounter occurred between the networks Upgrade! and freeDimensional, a real network-to-network confrontation. But as I arrived early, and freeDimensional wasn’t yet present, I walked into a vibrant discussion between the Upgrade! members. Apparently in the morning they had split into groups, which resulted in a clear division of tasks. On a practical level they discussed the splitting up of responsibilities. So one group being responsible for overall communication (website, mailing list, archive), another responsible for productional issues (Events, annual gatherings, products, etc.), and certainly important, a third group responsible for setting up and controlling a fund raising body. Of course as became clear in the follow-up discussion, several essential questions still have to be addressed. Like for example, will the separate groups have their own decision making power, or will this power be distributed within the network. Nevertheless, this division of tasks could be the actual seed for an organized international Upgrade! Network. 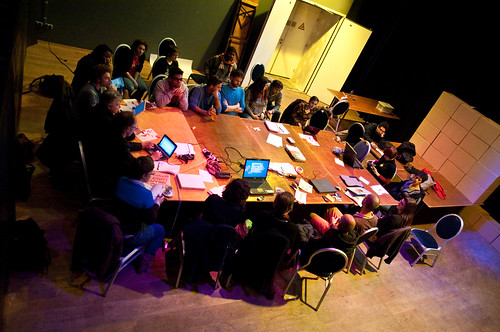 But then freeDimensional arrived and the topic changed to a mutual interest. When looking at the focus, and organization of both networks, this meeting seemed to be quite logical, as there are numerous similarities. Both have the same amount of local nodes that are geographically wide spread, and both offer a platform for artistic as well as activist strategies. But where the focal point at Upgrade! is more on the artistic side, within freeDimensional activism takes a dominant stand, thus in difference offering each other some solid ground for knowledge sharing. 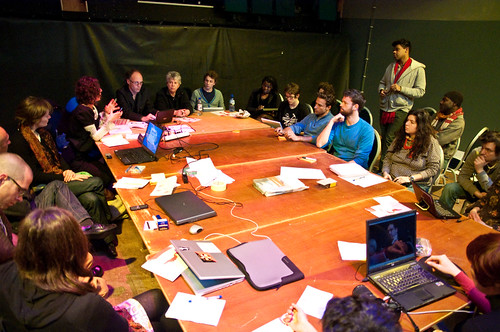 After both groups explained the merits of their organization, previous collaborations were briefly discussed. Each of the networks zoomed in on their ideas and activities and addressed each other several questions. For example, Upgrade! asked freeDimensional if approached art centers ever refused a request for collaboration because they were afraid that activist projects would stir turmoil when being to politically sensitive? As freeDimensional cooperates a lot with human rights organizations, and addresses related issues, in the past they certainly dealt with art centers that were hesitant about collaborating and fearful about political consequences. 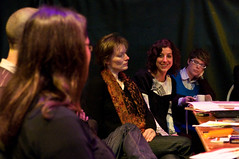 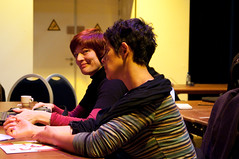 Without reiterating the specific merits of the discussion, it’s most important to notice that both networks benefited from this ‘confrontation’ through the sharing of ideas, as well as the sharing of their practical experience. At the end of their meeting even some concrete collaborations were offered over and over, which was certainly entertaining. While the Boston node of Upgrade! offered their Turbulence.org webspace to freeDimensional for exhibiting their net-art projects, freeDimensional responded directly, offering a position for Upgrade! as an affiliation on their site.