“Let’s break down the wall so My Creativity can join this session” was Ned’s comment at 4.45 pm during an intense debate between Creative Labour and Edu-Factory. 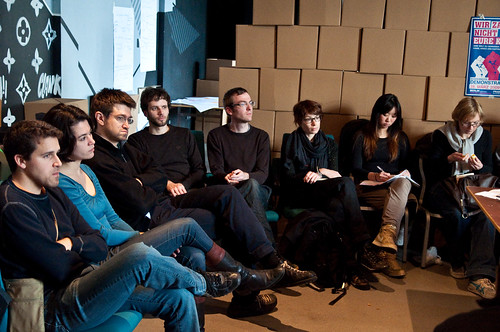 This cross-meeting was mainly intended to share knowledge between those networks. Edu-Factory has a solid fundament for their network and they are at another level of progress then My Creativity is now. So the main goal for My Creativity was to hear the processes and experiences that Edu-Factory went through. What they were also trying to do is to find similarities or common views to collaborate in some way. Yes, this is why Wintercamp is organized.

Both networks are really looking into the future; they are trying to develop a roadmap for their next steps. Creative Labour is doing militant research, organizing brainstorm sessions for campaigns and finding a strategic way to organize their network efficiently. There is a humongous production of knowledge and it mainly made possible by new digital methods. Therefore Creative Labour thinks that there needs to be for example meta-media, meta-unions, meta-institutions and meta-networks to be set up. Creative Labour is searching for a manner to be creative and critical at the same time.

For Edu-Factory, Wintercamp gave them the opportunity to have their first transnational meeting. In which way can they step beyond the classical way of thinking? They want to develop a transnational platform to connect with networks. What they are struggling now is the translation. Ned Rossiter:  “How can you translate the context or territory in for example Taiwan to another European country? Try to produce a catalogue of strategies”. 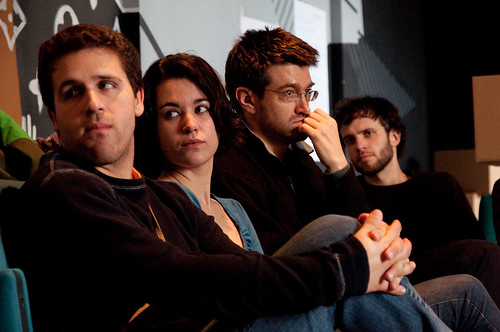 According to Edu-Factory, there is a strong movement which is emerging very fast, the new global institution forms. These forms make shifts to the movement of bodies and the movement of knowledge. It is then not a body of knowledge but the knowledgeable bodies that we have to liberate. For Edu-Factory the term network may not fit anymore. They rather name themselves as machines; a machine with character or an abstractive machine. A machine who is connecting struggles with each other.

These two networks were definitely exchanging their knowledge and observations, which was very inspiring to watch.