The talk opened with an audience survey:

Recently, I attended the UX Conference PUSH 2015 in Munich. One talk in particular struck a dystopian chord with me and has been rattling around my skull since. What follows are my own rattlings…

Designing the UX of the ____ Future

Let me start by giving credit where it’s due: I find no fault with the design work, and the UX thinking behind the realisation of The 2015 Museum of Future Government Services. It’s beautiful – and met an extremely challenging brief. How many creatives have successfully faced the task of designing the future – making it “optimistic, inspiring and ‘wow us'” – and for a culture outside their own?

My concern is that in embracing too much of a solutionist spirit, the humanity of users is lost in design. Cars become workstations – no moment of ‘productivity’ can go untapped. But then what about the value of stillness? Privacy? Boredom? Imperfection? 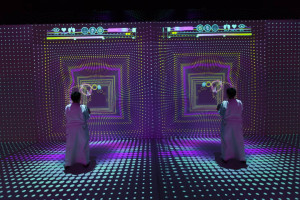 The project Fitzania is beautiful and alluring – but is it like a siren, calling users out of their depth? The collected ‘data from visitors’ gaming experience enable predictive diagnoses of illnesses before they’ve even occured’. But whose information is this? How are participants informed that this is the purpose of the game?

How do you foster a critical dialogue with the work you’re commissioned to do as a designer?

Why are only a fifth of such a talented audience raising their hands? Maybe we’re a little afraid of what ‘influencing the future means’ – I know I was after this talk.