As the co-editor of the upcoming INC Reader about critical meme research, you can imagine when I received an invitation to the Meme Studies Research Network I got really excited. Over 250 international and interdisciplinary researchers, artists and other meme enthusiasts are currently connecting over there. Which has been a blast, honestly. The main goal of the network is to collaboratively establish a meme studies canon, and offer researchers an index of resources that center memes as their main object of interest. As founder Idil Galip is also one of the contributors of the upcoming reader as well, I could not let the opportunity pass to have a chat with her about her favorite meme, how and why she started the network, about meme theory and her upcoming INC publication. 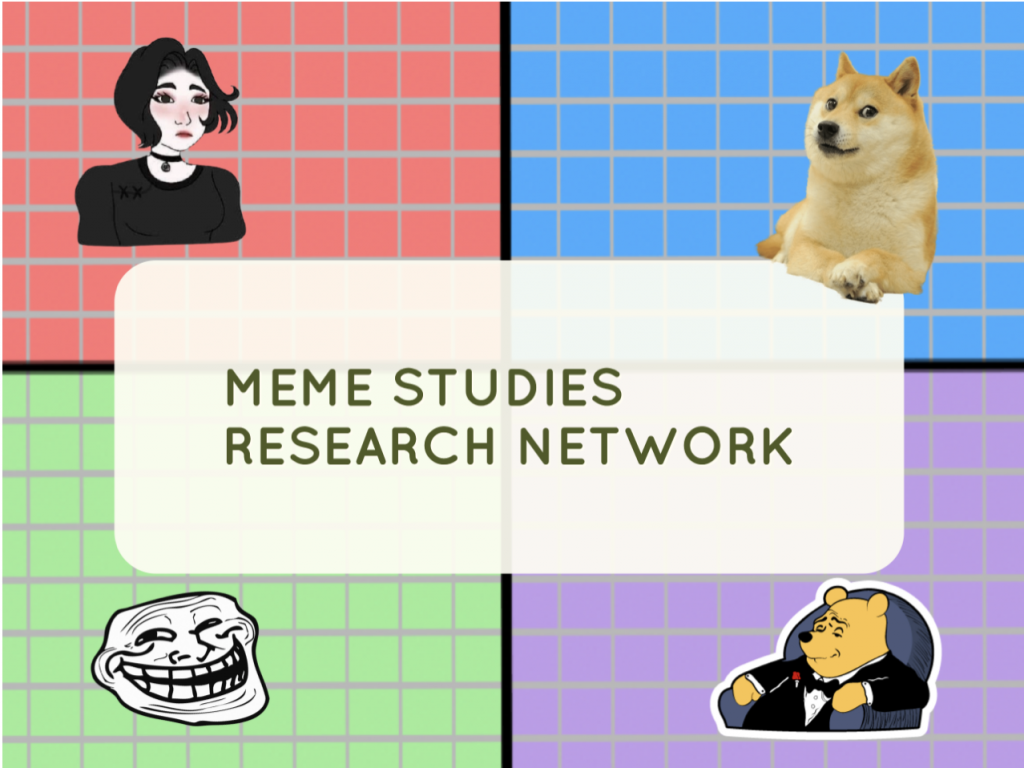 First things first: what is your favorite meme currently?
‘This is like when people ask you what your favorite film is, it’s so hard to choose just one. I think my favorite of the moment is the Monké meme. It’s about going back to  the monkey life, leaving industrial life behind. We manifested this Cyberpunk reality that we were so obsessed about. This ‘apocalypse’ feels very bizarre though – not old school like you would expect, like you would read in a book. It makes no sense to me, but maybe that’s because we’re living through it. The pandemic, being a home office worker, has made work and private life merge. You can’t go out. People are selling NFT’s. It’s madness and it definitely affects our psychological stability. I dream of going into the wilderness and foraging mushrooms sometimes for sure. I also like really grotesque and bizarre memes without a caption. They are so far removed from the original image caption meme form, that it makes me feel special in a ‘oh I get it’ kind of way’.’

Tell me more about the network. Why did you start it?
‘I decided to come up with it during my PhD in Edinburgh. I work in a Digital Society cluster, but my topic is still a niche topic. When I told people I’m researching memes they would not be able to move forward from the initial surprise. ‘How did you come up with that?’ Well, I didn’t. There are a lot of people around working on this. I had to explain what a meme is over and over again. I wasn’t being challenged. I wanted to meet those people who were also working on memes in an academic setting.’

Sounds familiar. How did you start?
‘I put together a reading list, while writing my thesis. So I wanted to share those resources with people. I looked into meme studies but there was not a lot going on. So I put it on Twitter. I expected to get maybe 3 responses but there were a lot of people that were interested. Turned out, people felt as isolated as I felt. I wanted to connect all those people who sent me a DM who did not know each other yet.’

How did the network grow?
‘Initially there were 30, maybe 40 people interested in the network, who saw it on Twitter. Then people started telling their colleagues and friends about it. We shared it on a couple of mailing lists too, such as  [AIR-L], which is the Association of Internet Researchers mailing list, and [CULTSTUD-L], a cultural studies mailing list, where we got a lot of responses from. The list is still growing. Now, 5 months later there are over 250 people on the mailing list and around 100 people in the Discord channel. There are also 5 to 6 moderators behind me, who are PhD students like me. They help run the blog and help run our events.’

Events? Tell me more.
‘Our first event is on the 19th of April. It’s going to be about digital ethnography in memes and it’s a panel discussion with Gabriele de Seta, who is a very prolific and nuanced writer. There are going to be more events in the future and we will also host more casual hangouts on Here.fm too.’

What communication and research platforms does the network consist of and how do those work together?
‘The network exists out of the website, Twitter account, a newsletter, a blog, a monthly bulletin and a Discord channel. And the resource list, of course. Discord is the most important channel for us. This is where people can meet each other. I think it’s the future of communication.’

What about Slack?
‘Slack feels too neoliberal. Discord feels natively digital; like those old chat rooms I used to hang out in.’

A great aesthetic.
‘People were also interested in setting up a journal, which is a great idea for the future but it’s too soon. We don’t know each other that well yet. I feel like we need a couple of years to get our shit together. We need to build a hive mind of sorts. That’s why we started a blog, it’s more relaxed. Members can start building their ideas and if they don’t agree with them anymore a few years later that’s fine. It’s also easier to publish something right away, before a subject gets outdated again. The Bernie memes are a great example.’’

How do you keep people engaged?
‘Yeah, it’s difficult. I try to Tweet, but not too much. On Discord you have people who engage and who lurk. I try to ask questions and that often works but sometimes it’s awkward because it stays silent. Some people get nervous because they think that I run things, but I don’t. I want people to pick it up together.’

What are your plans for the future?
‘Getting some funding would be the first step. A small amount of cash would do wonders already because it would allow for me to actually pay people. A conference (a real one – not online) would be lovely as well.’

Do you have tips for researchers that want to start their own network in their own subject matter?
‘The most important thing is to not do something others are already doing – otherwise it’s unnecessary. You don’t want to split those who are interested up. That would go against the logic of a network. Unless it’s a niche maybe. Also, to attract people, you need a hook. For us it was the reading list, so many people were interested in it. And if you do have something, you need to move fast, so people don’t lose interest.’

So let’s talk about meme theory for a bit. What are you working on right now?
‘What is a meme? is a question that comes back in all my projects. I’ve been obsessed with the fact that I can’t define what a meme is. I read other definitions and they all just don’t feel right enough. I like to look at memes in different fields; on Instagram, on 4chan, on Reddit, etc.  I research these meme communities and on every platform there seem to be different rules. It’s an ontological question.’

So with memes, the medium seems to be the message?
‘I don’t know. I’m starting to think more and more that there are memetic periods. Sometimes I like to provoke and say that everything and nothing is a meme at the same time. I don’t see memes as a fun picture and a caption. It feels like maybe it doesn’t even have to be an image.”

What do you think the current state of the meme is right now, after the focus in meme studies seemed to be on Trump and the alt right movement?
‘A lot of people are focussed on these deviant men online. They cause real life horror and violence, and as a result there is some sort of policy related interest in memes at the moment. It’s an amazing subject but it has been put on the backburner a little bit. There is more attention for politics and subcultures beyond alt right now – the impact of influencer culture for instance. I think as researchers we should look at it the other way around; the way we communicate has become memetic in its core.’

How do you see the future of the meme?
‘The future of the meme is here. We are living in a meme future. I’m obsessed with NFT’s and digital art and memes. The entire blockchain entered the meme world from the finance world, from the outside. Are memes art? Or is art becoming memetic? The pandemic has had an impact too; like I said, people seem to have a memetic mode of communication.’

Something else. What’s your take on meme copyright, when authors want to add memes to their to be published essays?
‘I ask. Sometimes I use creative commons images for stuff. But for an essay I’m working on I wanted to use three memes from an Instragam meme artist, so I just slid into their DM and told them I was writing an abstract inspired by their work. Their response was so lovely; they said they hoped I would have fun with it. As for my PhD I obviously had to use memes. I decided to focus on an online community and Instagram and their memes have a strong aesthetic, where you can usually tell by who it is made. Because it’s their intellectual property I sent them messages. The best thing to do is be real with them and if they don’t want it then you can’t use it. Instagram memes are different from memes on Reddit or 4 chan, of course. If you find a meme that anyone could have made, you still have to do your best to find out who made it – that’s every researcher’s duty; to follow the memetic thread. It’s too easy to just say ‘oh it’s a meme and you can never know who made it’.’

And finally, you’re contributing to our upcoming INC reader about critical meme research. Can you give us a little scoop?
‘I’m a person who grew up on the internet. I saw a lot of objectionable content that you would not so easily come across now . The internet is grotesque. This grotesqueness is interesting to me. During my field work on Instagram I came across @todaywasmybirthday on Instagram – their work is both grotesque and nuanced. So I started following that aesthetic. In my essay I present a semiotic analysis of grotesque memes and try to answer the question of why we enjoy the grotesque so much.’

Thanks for the lovely chat, Idil!

The upcoming INC Reader about critical meme research will come out in July this year. I will publish an essay about the ethics of meme copyright on the Meme Studies Research Network blog and Idil will be publishing on the INC blog as well, so keep an eye out.