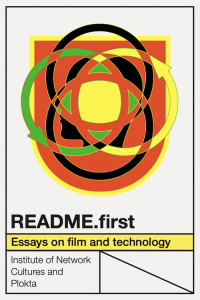 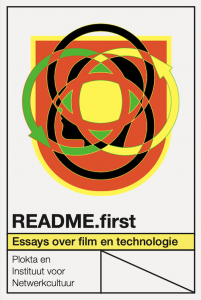 EPUB in English and Dutch

README.first is a bilingual collection of mini-essays, published in the run up to the Plokta filmfestival. We’ve asked writers, researchers, theorists, artists, programmers, and others to pick an online video that functions as a stepping stone for their thought and practice and to comment shortly on why they find the video so significant, funny, or outright disturbing. The resulting reflections speak about Silicon Valley obsessions, our mediated social lives, the impact of technology on centuries old games, and more.

Plokta showcases film as a frame of socio-technological themes and discussions. With these essays we want to broaden the scope to one of the most significant developments in visual culture of the past decades: the rise of online video. At the Institute of Network Cultures (INC), online video has been a research topic already since 2007, in a continuous project named Video Vortex. Together, Plokta and INC, hope to stimulate reflections before, during and after the festival on what the moving image has to say to us.

Published by the Institute of Network Cultures in collaboration with Plokta. Plokta is supported by the Amsterdam Fund for the Arts and the Creative Industry Fund NL. Amsterdam, 2020

This publication is licensed under the Creative Commons Attribution-NonCommercial-NoDerivatives 4.0 International.