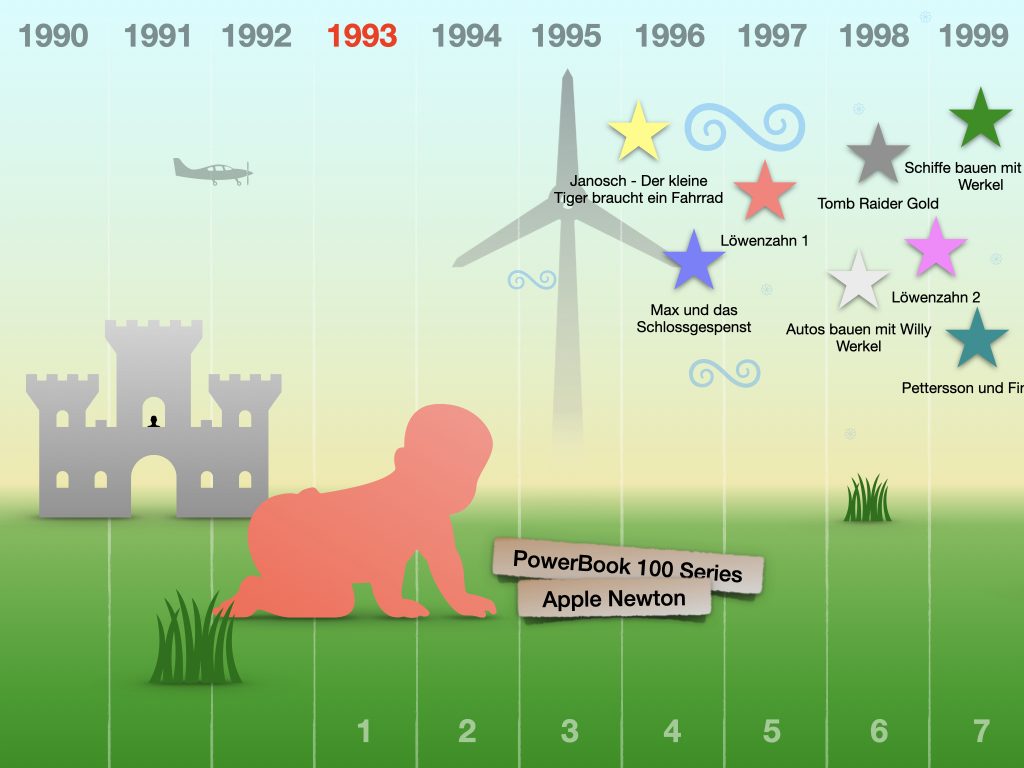 I grew up in an Apple household. My mother is a graphic designer. My father is a photographer. My sister is both. I still remember sitting in the cabin we had in our garden, taking very important notes on my father’s retired Newton and PowerBook 100 Series neither knowing how to write nor how to use a computer. Whenever I would lurk around in my parents’ home-office I would see them re-touching in Photoshop or lay-outing in QuarkExpress.

I didn’t understand what my parents were doing and why exactly they were not using Windows machines, like everybody else. But it was clear to me that it had something to do with my parents being creative professionals. Creative people are using Mac. That’s just how it is. And for all, I cared that was fine, as long as I was occasionally allowed to play games on my father’s Power Macintosh G3.

In 2001 I inherited a bondi-blue iMac G3, from my grandmother. The iMac was the first computer released under Steve Jobs after his return to Apple. Not only did the iMac bring back Apple from its financial struggle, but with its all-in-one-out-of-the-box-plug-and-play experience, its translucent plastic case, and the introduction of the ‘i’ prefix it also marked the beginning of what Olia Lialina named the coziness of iProducts.

As an eight-year-old, that comfort went widely unnoticed. My main concern was playing The Sims and making sure the extension packs were installed properly. But as I grew older I developed the skills of a true sysadmin. I was mostly concerned with changing the default screensavers and system sounds. Advanced Google searches allowed me to acquire the perfect wallpaper for 1024 x 786 pixels. 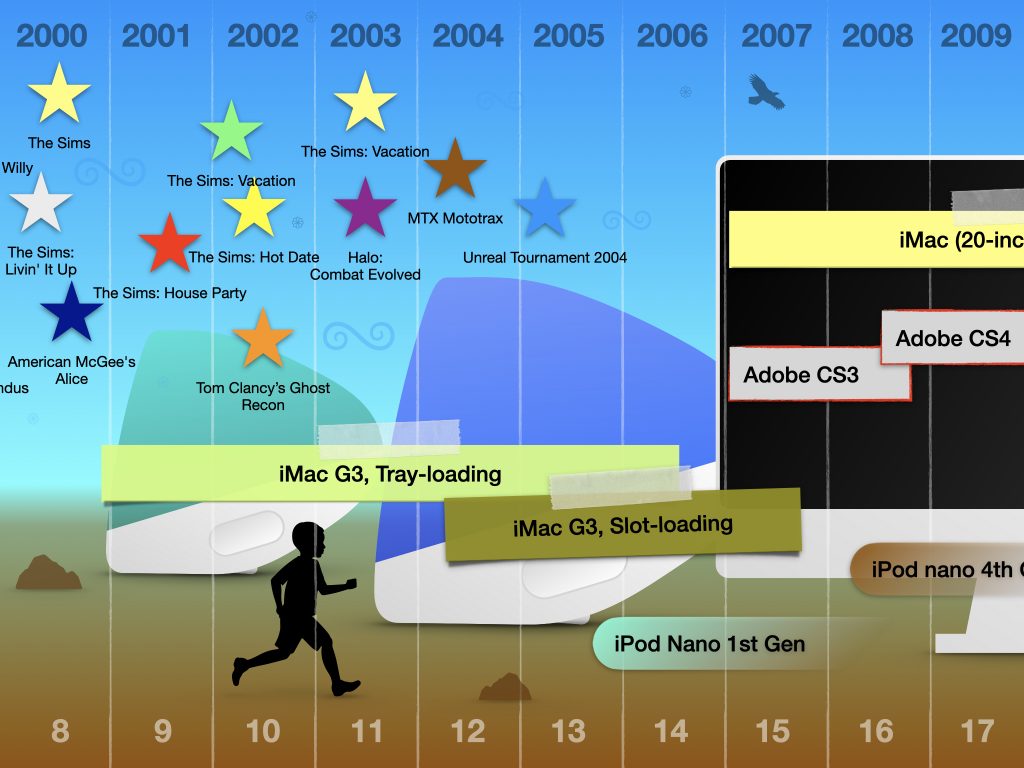 By the time I was 14, living in an Apple household had become more of an annoyance than a blessing. For all I knew, MacOS wouldn’t run Medal of Honor, Need for Speed, GTA, or any other of the games that my friends were playing on their parents’ PCs. Installing MSN Messenger was not possible either. I had Halo: Combat Evolved, Tom Clancy’s Ghost Recon, and Photoshop, Illustrator, or InDesign. With my whole family working within the “creative industries” begging my parents to buy me a Windows machine seemed pointless. I tried it anyway — unsuccessfully. I was locked out from the blissful experiences of the Microsoft world.

As a true Apple user, I was required to be creative. First, out of boredom than out of necessity, I learned which Smart Filter would give me the flashiest result for my new profile pic on Knuddels or SchülerVZ. I also mastered my Google search skills and finding alternatives for unsupported software became not only a routine but a sport. Once I figured out that Adium would allow me to run ICQ and MSN in the same application, I considered myself a power user.

Naturally, I was preparing all my school presentations in iWork. And what I lacked in content I made up with the templates, font-choice, and imagery of my slides. Whenever I would use a friend’s computer I would notice how alien, Windows Vista felt to me. While Windows was still stuck in the glossy remains of Y2K, Mac OS had already moved to brushed metal in 2002. In 2007, this skeuomorphic fantasy had turned into material reality with my second computer, a 20-inch aluminum iMac.

I learned how to love Apple. With the release of the iPod, Apple got noticed amongst my friends. Being a – previously uncool, now accepted – Apple user from a designer family I was known to be the creative amongst my friends. My first freelance gigs were mostly paid in clout, but for my friends, I would design everything from birthday invitations, gift cards to party flyers.

In 2011 my design education had officially started, with an apprenticeship as a Technical-Design-Assistant. My classmates and I learned everything the Adobe Suite had to offer. Photoshop, Illustrator, and InDesign were covered in individual classes. Premiere Pro and After Effects were taught in the neatly titled class, AudioVision. All classes were taught in the computer lab. The computer lab was equipped with a few dozen windows machines.

Recognizing the demand for a portable work-setup, my parents got me my first laptop — a mid-2012, 15-inch, Unibody, MacBook Pro. With that MacBook, I was still an exception. If my class-mates had laptops at all, most of them were using windows machines. In October 2011, Apple released iCloud and Adobe introduced the Adobe Creative Cloud. By the time I started studying graphic design, I was in full sync with both of them. Apple and Adobe had become the default. 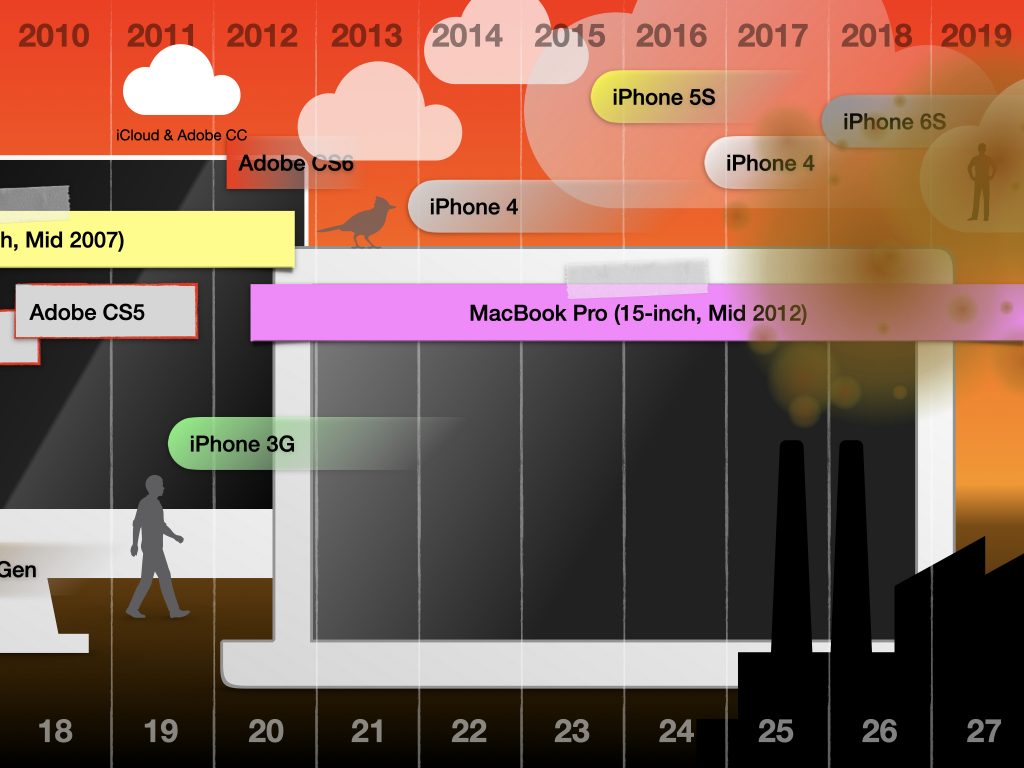