In this post I want come back to Cinemagraphs and add some more thoughts about this visual phenomenon located halfway between photography, video and animation. Although Cinemagraphs might seem like a very novel visual case they actually have a lot in common with many of the characteristics of early cinema and animation; they both have been created to prove the illusion of motion itself, to cheat the eye and hypnotize the viewer. However, Cinemagraphs are some sort of animated photographs that are between the early hand-made animations of 19th century (the discovery of persistence of vision) and the notion of cinema as a registration of reality. As Lev Manovich notes, animation was put in second place after cinema took the role of documenting and capturing the “reality out there”, emphasizing the film as a registration of reality and thus generally creating audiovisual linear narratives that made us believe that what we saw was real. Nevertheless, with the birth of computer animation, there has been a turnaround to the extent that many of the audiovisual content we find online is more and more based on animation techniques that create cinema from a white canvas, like a painting procedure. Cinemagraphs are in between, they play the role of photographs that mirror “reality” but at the same time they are animated. They are thus an animated “reality” that proves the very nature of image as a representation, as a manipulated object.

In order to manipulate and animate a digital image (for instance a Cinemagraph) we must divide it into layers and play with them, leaving some of picassothe layers static while applying motion to others; just like early animations consisted of a moving object/layer projected on a fixed background. This fact of deconstructing the image into layers has a referent in Cubism, the 20th century art painting movement undertaken by Braque and Picasso. The speed and technological progress of 20th century induced Braque and Picasso to represent the new changing reality in which they were living. They wanted to break with the predominant art conceived as an imitation of reality and promoted the art as a creation itself. The prevailing Renaissance perspective was frozen and fixed on a single point and did not adjust the experience of seeing; Picasso and Braque aimed to depict the process of observing representing both time and space on a single image. Consequently, they deconstructed the planes, portraying different points of view and multiple angles of objects simultaneously; apparently deformed but actually more faithfully represented in its entirety. Indeed, the fragmentation of the body and the space by means of decomposing the plane was an irrefutable influence from cinema. 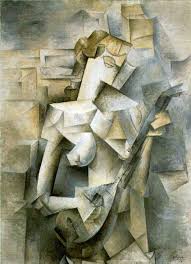 Cinema created the illusion of a space that exists in time and Cubists portrayed the illusion of time through a physical space. Cinemagraphs have a bit of both, they transport the viewer to a sort of oneiric scenario and at the same time they originate an intense feeling of experiencing time. Just applying some of the cubist principles, deconstructing and animating a specific selection of the photography, the illusion of a eternal moment is created. They are fixed photographs that use a fixed point of view but they are alive because they create the illusion of both time and space. They freeze eternal moments and scenarios by means of fragmenting  a portion of “reality”. Cinemagraphs, like cubist paintings, are a conversation between reality and illusion, between the object of representation and its idea. They contain the realist photography and the animation, the frozen point of view and the motion, the single perspective and its fragmentation; Cinemagraphs are a cocktail of our way of our experiences of seeing, a representation that makes visible the power of its own medium.

Some notes on Luminous Flux exhibition

Luminous Flux is the current exhibition at Arti et Amicitiae (Amsterdam) where you can see the works of seven London based-artists that focus their artistic practice on the interrelation between video, installation and sculpture. The exhibition proposes a linear walk through the pieces which are located in very spacious and individual rooms (except of […]