As part of the hybrid workflow for the Institute of Network Cultures developed by the INC subgroup, I started a collaboration with Italian graphic designer Roberto Arista in order to write and collect scripts that facilitate the process of importing HTML into InDesign.

This set of scripts pre-processes HTML files, preserving such entities like headers, paragraphs, italics, footnotes, tables, images, etc. Some of these steps are summarised here. The scripts do so by converting the HTML files into an InDesign-friendly XML structure and employing its Import XML function.

While such procedure is pretty good at maintaining the underlying structure of the text (Paragraph and Character Styles are almost automatically generated), it still has some imperfections. For instance, an InDesign script called ReFoot was modified to generate footnotes declared with a XML-compatible markup. The problem is that footnotes’ inner styles (italic, bold) are lost. At the same time, yet no solution is provided to keep images or at least their position.

Since May 2014, pandoc, an open-source ”universal document converter”, is able to produce outputs as ICML files. ICML files are generally managed by InCopy, Adobe’s own word processor meant to integrate with Adobe InDesign.

One of the advantage of using pandoc to obtain ICML is the fact that no intermediate format is needed – HTML in our previous procedure. Therefore we can directly use our Markdown source files. Here’s the syntax to convert one document:

The generated ICML file is then imported into InDesign with File>Place. In order to test the output, I used this file, derived from the Society of the Query Reader.

Both Paragraph Styles and Character Styles are automatically generated. 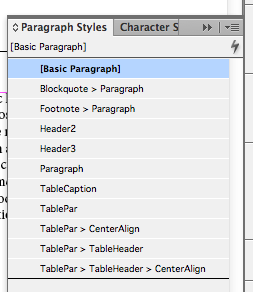 In addition, a placeholder for each image is created. 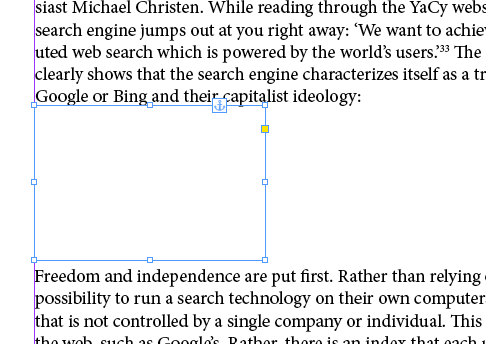 In this sense, pandoc seems to provide a pretty robust conversion system that straightforwardly connects the production and editing of Markdown structured text and the design phase in the Adobe InDesign environment.