Corrections form a large part of the process of making a book, whether it is in print or electronic. Handling corrections posed one of the biggest challenges to the INC research team and the ideal solution is still not found. To start with the conclusions:

Conclusion 1: work towards a document as clean as possible before sending it to the designer and developer because this saves a huge amount of work (see also our post on the style guide). This is mainly due to:

Conclusion 2: it seems impossible to avoid multiple work on corrections, meaning both editor, designer, and developer might have to put them through in their respective files.

Conclusion 3: not all corrections are relevant for all publication formats; different kinds of corrections are made in different locations. An example are hyphenations, which are specific to a desktop publishing file, and do not play a role in a digital file.

A little pre-history
We focus on corrections made after designing (DTP) the document. Of course, there are also corrections done before the final manuscript is handed in – these are more or less part of the writing process. In the beginning of the project we got into this. For extensive editing and rewriting we found that Microsoft Word or similar text editing programs remain the most used and useful – track changes and comment functions are necessary in this phase, and moreover, most authors simply work in these programs. For this reason we found it more fruitful for our project to concentrate on the document handling from its more or less final state on.

Markdown
Since a publication in a hybrid workflow no longer has one output format it becomes even more important to have an up-to-date archived document which can flow between the different parties (editor, designer and developer) involved. In our hybrid workflow this is a markdown file (for more on Markdown see the workflow how-to).

Types of corrections
This means the corrections we talk about are not about rewriting or extensive copy-editing, but of the following kind:

Below is an example of a standard spread marked with editorial corrections, including spelling, hyphenation, and design questions. 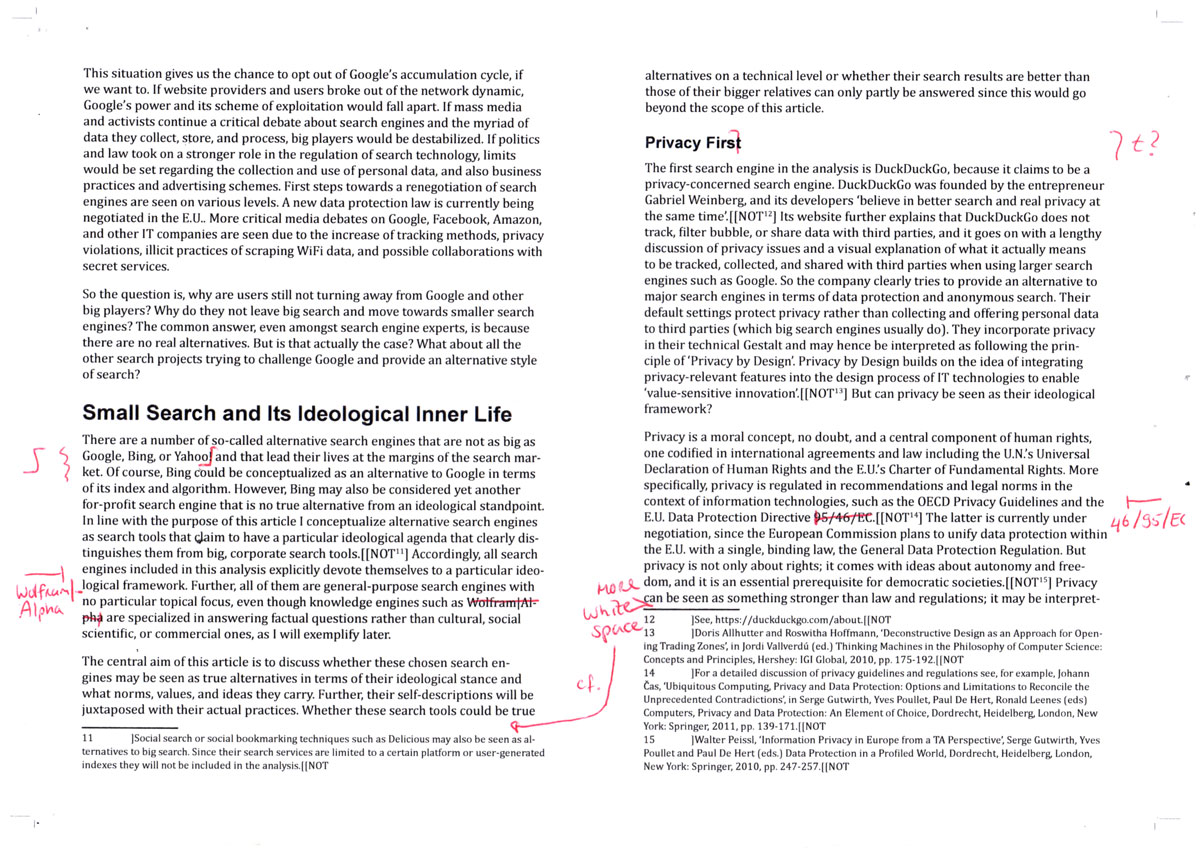 Place of corrections
Where to process a correction depends on the kind of correction it is and who is working on it (editor, designer or developer). It is advisable to define who inserts which correction where to minimize overlap. When designer and developer work on separate files at more or less the same time, namely EPUB and InDesign, some corrections need to be processed in multiple places.

The corrections are usually marked by the editor and then issued to the designer, who will process them in the InDesign file, and to the developer who will do the same in the EPUB. Text corrections need to be processed in both files in the same way. Design- or lay-out specific corrections can be divided in desktop publishing corrections (InDesign-only) and design and technology corrections in the EPUB. This means a distinction has to be made. To return to the example of hyphenation: an incorrect hyphenations is specifically a problem of the desktop publishing file and needs to be manually adapted there, while playing no role in the HTML file. The same goes for white spaces that are too big or small; or the other way around, for links in the EPUB that do not work, or headers which do not appear in the Table of Contents.

Archival file
After processing corrections in the HTML file for the EPUB, this can be exported to Markdown, to keep as an archival file. Take note: on other occasions – for example when only producing a print edition or when the ebook is made in a later stage – it may be necessary to also process corrections in the Markdown file. This file can then be archived or used later on to produce the EPUB. In that case, processing these corrections can be done by the editor.

Communicating corrections
Traditionally the editor or corrector makes corrections on a print of the designed PDF file, as shown above, which is then processed by the designer. This procedure is still followed in a hybrid workflow ending in a print and electronic edition. Keep in mind that in the electronic files the specific locations of corrections can’t be communicated through page numbers, but by their relative place (chapter, paragraph).