During his brief talk nearing the end of the afternoon’s presentations, Harold Konickx spent fifteen minutes discussing the changing face of the page in the wake of digital publishing. He began by quoting Marshall McLuhan, noting that “an environment becomes fully visible only when it has been superseded by a new environment; thus we are always one step behind in our view of the world”. This quote was employed as a way of asking the question, how do readers and designers of digital books relate to the page now that they are not dealing with a page in itself? As Konickx asked, evoking McLuhan once more, “Are we ready for a different kind of page… or are we trapped in a rear-view mirror view of our world?”

As a means of grounding his research on digital publishing, Konickx focusses on the relationship between reader, designer and book. His first case study to demonstrate this was the work of Megan Hoogenboom, and specifically her ePub version of the poem “Boem Paukeslag” by Paul van Ostaijen. Konickx noted that while this kind of poetry depends on specific formatting, taking spacing and fonts into consideration, for example, Hoogenboom successfully translated the poem into ePub format by transcending the usual role of the page, reinventing the part it is meant to play and “overcoming the so-called boundaries of ePub”.

Konickx argued that Hoogenboom touched on the core of what a book is through this work; but what exactly is a book if it is not a collection of physical pages? The traditional notion of the book is very much bound by content as well as form. Surely drawing on Kittler’s work in Software Studies: A Lexicon, Konickx evoked the example of the codex, noting how the development of parchment allowed the creation of the book as a whole, and on the part of the reader allowing them to feel as if they were holding “the whole world” in their hands. In particular here, Konickx cited Miriam Rasch as stating that digital books do not allow one to really feel what point they are at within a book: physical books, on the other hand, allow substance and form to work together to create a pleasurable mental and tactile experience. 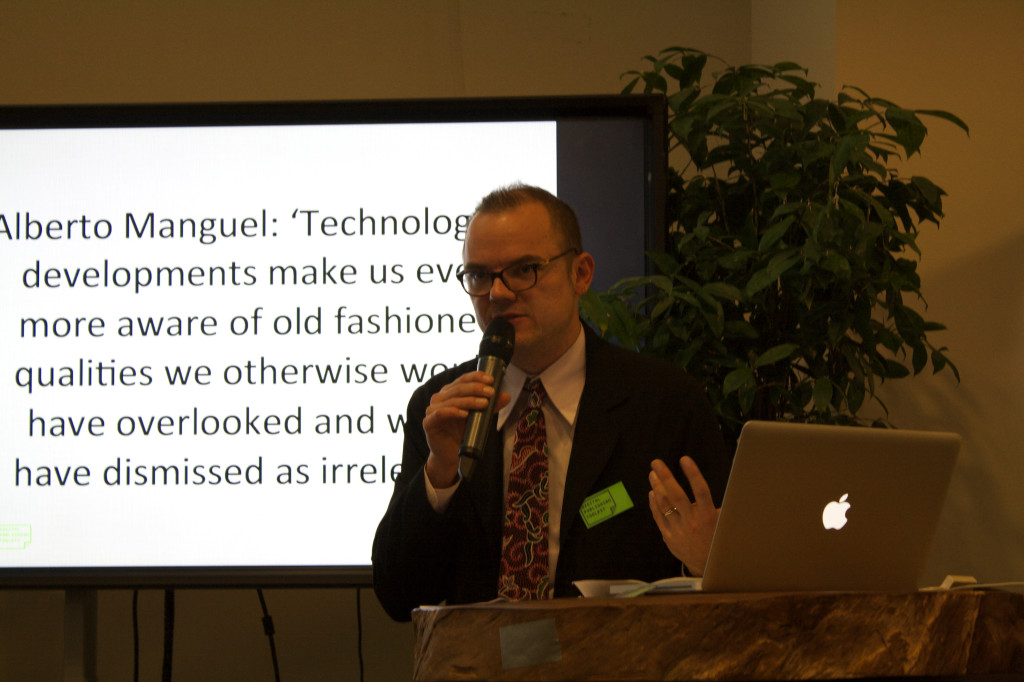 Konickx is well aware of the nostalgic qualities of his research. Just as with McLuhan, he nodded to Alberto Manguel’s argument that new technological developments make us more aware of old fashioned qualities we would otherwise have overlooked. A possible analogy of this, Konickx argued, is being currently demonstrated within the musical community with the rise in use of vinyl records. While accepting the love of books as objects is romantic, and books having desirably qualities in and of themselves, the session was not about putting the physical book on a pedestal. 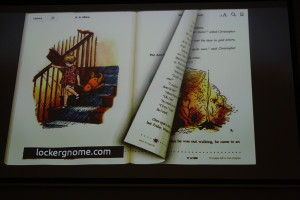 Considering the skeuomorphism present in Apple’s iBooks software, Konickx lucidly brought us back to McLuhan’s horseless carriage syndrome, wherein the first motor vehicles where designed to resemble horse drawn carriages in order to acclimatise the general public to their presence on the road. But despite the illusion of pages turning as shown in this image, Konickx argues that ebooks do, in fact, promote a far different experience than that of reading a printed book. Despite identifying ebooks as being essentially networked, Konickx returned to the description of physical books as a positive experience of allowing readers to have the whole world in their hands; I suppose that in this instance, the limits of a world – i.e., the end of the book – are more appealing than a world that is seemingly endless.

Returning to Megan Hoogenboom, Konickx used her work as an example to show that the potential success of the ebook as a medium lies in the acceptance of its own specific capabilities. What makes a digital book stand on its own? Konickx pointed us towards Between Page and Screen: Remaking Literature through Cinema and Cyberspace as an extensive collection of essays, published in 2012, as a means of establishing a discourse on the subject.

Coming to the end of his talk, Konickx moved to N. Katherine Hayles’ essay “Intermediation”. Throughout her work, Hayles has been drawing comparisons between humans and computers to make a claim on our inter-relation. She argues that literature throughout the 20th century is computational. Konickx believes that the reading of a physical book lies in stark difference to the reading of a digital; Hayles would agree with this, and propose that this difference lies in the constant flux of words and images that change as a result of our needs. Moreover, Hayles argues that “a computer can function as a partner in creating intermediary dynamics in ways that a book cannot,” placing more agency to a computer as opposed to its printed and bound counterpart. According to Hayles, engagers with digital books are players rather than readers, as they have more control over what they are consuming. Hayles’ primary example of this is Judd Morrissey’s The Jew’s Daughter, a form of digital literature, she argues, would be impossible when combined with the durability of ink.

Konickx left us with this example, and by finally reminding us that a digital page is not a page, at least not in the same way as a physical book. These physical books have irreplaceable qualities, but digital books have new qualities that have yet to be fully explored through experimentation and the development of new ways of creation, and of engagement.