Presenting on behalf of the design agency Essense, Arjen de Jong began by positing the essential question for working with BIS Publishers to create an ebook: (How) can we make rich media, highly interactive publications, accessible on multiple devices at a reasonable cost? 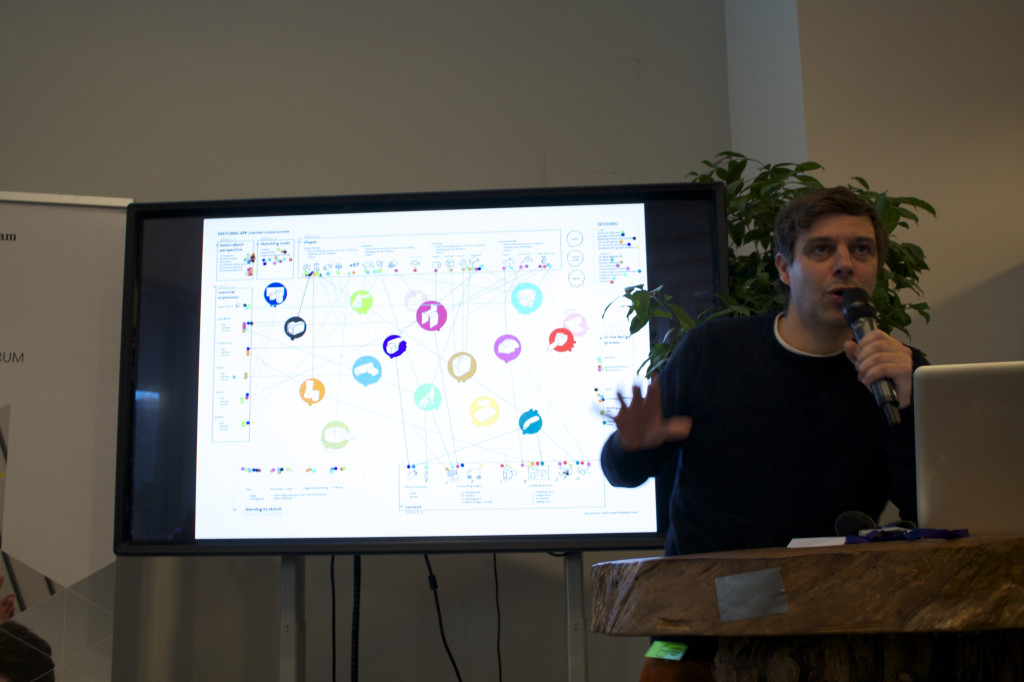 As a publishing house, BIS is renowned for its innovative approach to graphic design and visual culture as a whole; in order to fittingly represent their brand in the field of digital books, it was essential for Essense transfer this rich media approach. But how can this be achieved in the digital realm, especially when combined with additional characteristics such as interactivity and cross-device compatibility? The inclusion of these specifically digital elements to a book allows greater scope for creativity, while simultaneously causing potential problems of executability.

One interactive element de Jong identified was the potential non-linearity of digital books. On a “page” level, they could include individual interactive panels, but beyond this they could also allow readers to jump in between different sections of the text, while still maintaining a sense of wholeness of the book. This potential flexibility of the medium is demonstrated and hindered by readers using multiple devices. While this allows greater levels of portability and multichannel engagement for users, it also creates a greater level of complexity for designers, who must ensure that content translates well across devices.

While multiple device use is common, de Jong and his team made the decision to focus their ebook development on tablets. He cited a reason for this as, firstly, the inability for e-reader hardware such as a Kindle that uses e-ink to show the kind of rich media that was required for the publication, and secondly, that the e-reader has been transforming into a more tablet-like device, shown, for example, by the Kindle Fire. The focus on tablets furthermore allowed access to open, flexible and sustainable formats: ideal conditions for developing a new way to view e-publications.

After trying to work with various different developing tools and identifying their shortcomings for tackling the task at hand, Essense settled upon PhoneGap, due to its usability, integration of web code and compatibility across platforms via the Cloud. Experimenting with Markdown to write their code on multiple channels, transforming it into HTML and then transferring it into Phonegap, de Jong and his team were pleased with their results but nonetheless acknowledged that there was still some way to go towards perfecting the kind of e-publication they were setting out to make.

In this brief presentation, de Jong demonstrated that creating an e-publication to fit the specifications of a client is often easier said that done. The integration of the myriad potentials for these digital books is often as much of a hindrance as it is inspiring. Nevertheless, from the work that has been done by de Jong and his team, it is clear that this kind of e-book is certainly possible, and opens up creative doors for innovators such as BIS Publishers.