In Vienna I took notes at the “Creative Cities, das Versprechen der kreativen Ökonomie” event, organized by the Austrian public broadcaster ORF, curated by Armin Medosch and Ina Zwerger. It was packed. The afternoon was sold out and drew around 300 people. The conference dealt with the whereabouts of the creative industries meme and not so much with city promotion, as the title may have suggested. Funny enough it had an overall critical approach — something that was hard to imagine 3 or so years ago. Local policy people or consultancy gurus were absent. There are a number of audio files available online, in German. The flickr pictures are here. Most of the material is collected on Armin Medosch’s The Next Layer blog, who wrote three interesting introductory essays (in German) and put together a bibliography on critical creative industries research.

Richard Barbrook (London) kicked off with an introductory lecture based on his “The Class of the New” pamflet, followed by Diedrich Diedrichsen (Berlin) who gave a theoretical lecture, criticizing the very concept of ‘creativity’ from a contemporary arts perspective. I was next and spoke about the Dutch situation beyond good intentions and its critiques (such as our MyCreativity project).

I spoke (in German) about the initiatives in Rotterdam, Eindhoven and Utrecht, the housing policies of the Amsterdam city council to provide startups with cheap office space, in response to the real estate drama that made Amsterdam so unaffordable. I proposed to invent new institutional forms that deal with the “creative industries” as it scales up. How would “creative labour” campaigns, to support precarious workers, look like in theses times of economic crisis?  This all, of course, builds further on the “organized networks” concepts and the outcomes of the Wintercamp event of March 2009. Marion von Osten, who took over from Inke Arns at the very last minute, spoke about her seminal Be Creative exhibition in Zurich, back in 2003.

In conversation with Armin Medosch, Jaime Stapleton, associate research fellow at the School of Law, University of London spoke on the origin of the ‘creative industries’ term. Back in 1997, when the Blair government took over from the conservatives, a reformation of government departments became necessary. Culture and the arts were part of the Dept. of Heritage. There was a need to restructure the department and the outcome was Culture, Media and Sports. Within this newly created entity much revolved around intellectual property rights through the booming television sales of soccer plays. This is how, according to Stapleton, the IP story (measuring creative industries through IPR income) got connected to “creative industries”. Another, more obvious reference is Schumpeter’s ‘creative destruction’ but Stapleton once mentioned this and then got interrupted. The creative industries meme itself was developed by a small group of consultants and New Labour politicians (amongst them Charles Leadbeather) that plotted how to increase the budget for the arts by giving it a more sexy name. This, in essence, still elitist approach, then got out of control (as many concepts did, in the late nineties) and developed its own dynamic, drifting away from the traditional arts sector all together, into an entrepreneurial direction.

“It is preferable not to travel with a dead man.” (quote by Henri Michaux, used in the performance between lectures).

Last but not least Maurizio Lazzarato (Paris) started his lecture (in French) with a quote by Felix Guattari about the desperate call for creativity as a sign of its disappearance. Creativity is a sign of poverty, not wealth. In the first part Lazzarato spoke about Marcel Duchamp who is seen in the West as the quintessential contemporary artist. He developed terms like ‘anart’ and ‘anartist’. Duchamp hesitated to use the term ‘creation’ or ‘creativity’. Art is about making something. For Lazzarato creative industries is an old-fashioned way to think about the economy. For Duchamp it is the viewer who produces the art work. It is the public that co-creates the work. Creative industry is, in essence, still a fordist term. Just like Godard once said, the viewers of the film should be paid to watch the film. Duchamp lived from heritage, sponsorship of rich friends, and, in part, of the sales of his art work.

Then Lazzarato started telling about the workers in the performing arts in France, currently estimated at 150.000. Recently there were strikes by the workers in this creative industries sector. The income inequalities in this sector are extreme. The outcome of these strikes were an overall worse situation in terms of contract, pensions and social securities. In the end, the artists and film/dance/theatre technicians had to become self-employed entrepreneurs. The struggle took four years and now has been, more or less, lost. The example shows how a cultural sector as a whole impoverishes. Television, on the other hand, is developing in different direction.

Sarkozy recently announced the establishment of a Council for Artistic Excellence. In this model there is an a well-paid elite and an impoverished broad base of cultural workers, intended to reverse the 1968 policies. Something similar happens on the level of universities, where Sarkozy has proposed to create a two-layer system aimed to constantly monitor the productivity of university personnel. Aim of these policies is to differentiate between productive and unproductive workers and to introduce competition and other market mechanisms. The goal of these neo-liberal policies is to control time. For the workers that Lazzarato spoke, money is time (as a reversal of the capitalistic logic time = money). It is the in-between time, the unused, lost time that are the living times, which is the main target of neo-liberal policies. What the system qualifies as ‘dead time’ is in reality the most creative time. Cognitive capitalism are systems of anti-production and not of productivity or creativity, simply because it aim to destroy time. 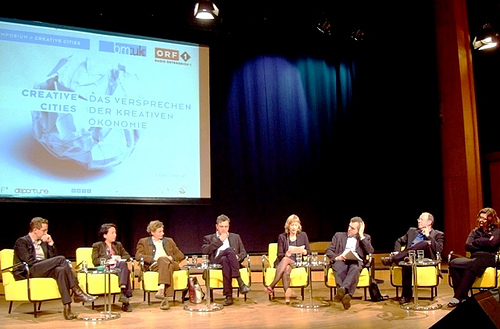 The closing debate focused on the local circumstances in Vienna. There were the obvious complaint that the creative industries critique is overlooking the ‘fun factor’. People have to deal with the consequences of their professional choice. Apart from a few tourists that drive along the Ring, the Segway has not been seen in Vienna. Marion von Osten expressed the Right to Continuity. We have to be able to fail, to have free time, to finish projects, to reflect and go on. For the Vienna art professor that participated in the round table creative economy is a perverse interpretation of modernist principles — and most seemed to agree with this.