I am in Brazil for five days for a number of lectures. On Tuesday April 14 I did a duo presentation and debate with Creative Commons Brazil organizer Ronaldo Lemos. The evening at the theatre next to the PUC university in Sao Paolo was organized by locative media artist and PUC professor Giselle Beiguelman as part of a lecture series on net art, sponsored by AgenciaClick. 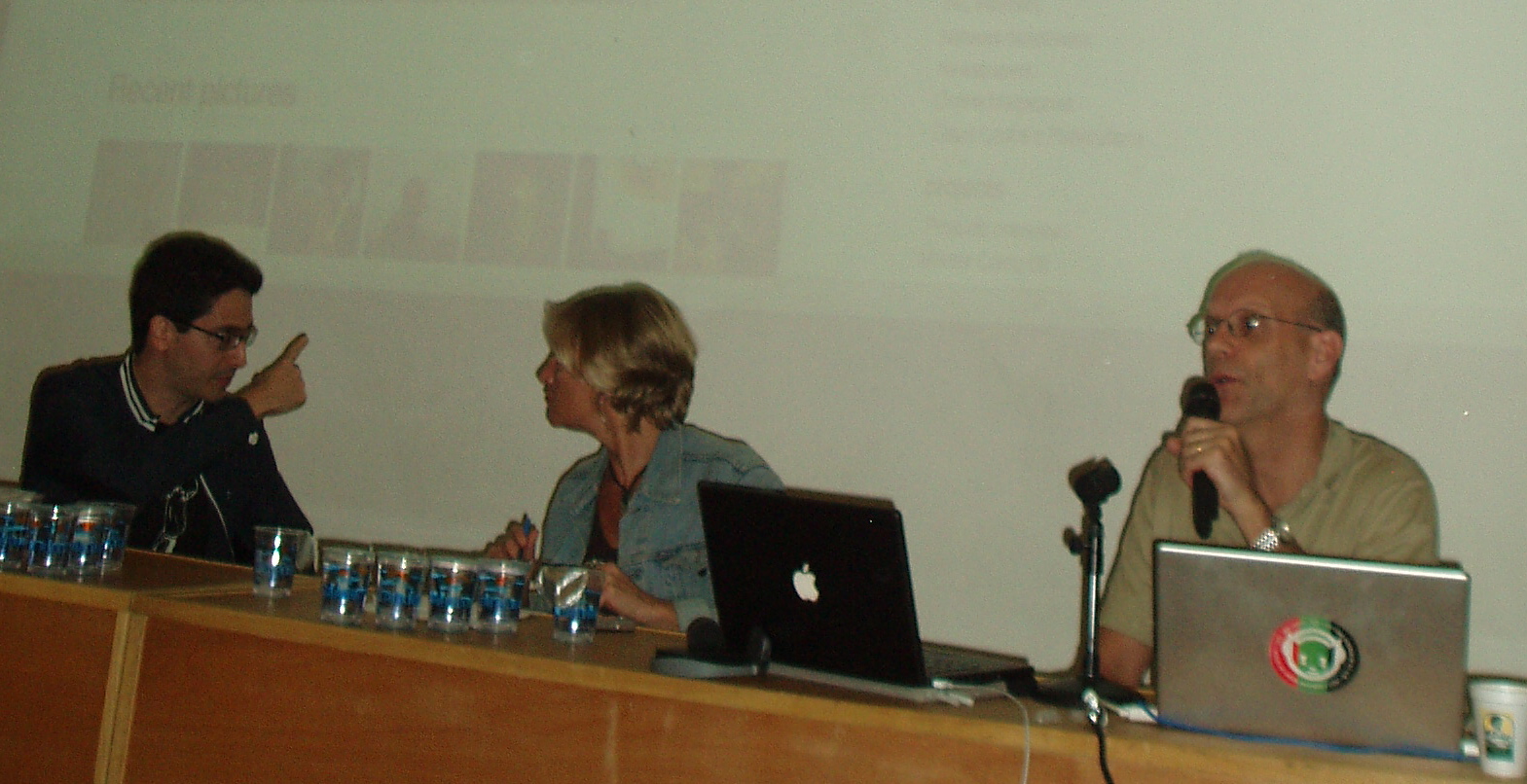 Ronado Lemos talked about art and technology. He observed that technology is missing in visual art exhibitions. As an example he mentioned Nicolas Bourriaud’s Alter Modernism in at Tate Britain in London. He found it astonishing that no work on display there featured or questioned technology. It was absent. This also counts for the recent Sao Paolo Art Biennial: the graffiti incident, in which street artists were prosecuted as barbarian invaders, exemplified the gap. Why are these genres excluded from the visual arts? Look at Ars Electronica and you will see that new media arts is a parallel universe. So what does the seperation between digital and visual arts mean? Ronaldo did not expect such resistance against anything digital amongst contemporary artists.

A similar tendency, so Lemos, could be witnessed in the ruling political classes that are afraid of online election campaigns. Just think of the resentment against Wikipedia. Or the way amateur scientists are marginalized and ridiculed. The sphere were these fears are written down and materialized is Law. In past decades, in Brazil, copyright law was not considered crucial. It was neither taught nor studied. This only changed in the past 5-10 years. Librarians, musicians and other professions are now discovering how copyright is limiting their work. Recently, a law was proposed concerning copyright and there is now a great controversy arising against the bill. 140.000 people signed a petition to protest against the law. The online mobilization has so far been impressive but the outcome of this protest is not yet known.

In his last part of his talk, Ronaldo Lemos confronted the ‘barbarization of the new interlockers’ with four possible strategies. What should happen whe capacity of art to represent technology are limited in such a manner?

1. Artists are going to the extreme and radically break with copyright and authorship. Here Lemos mentioned the Italian Wu Ming writers collective.

2. Artists start to work with obsolete technologies, that hardly had time to get further developed. This tendency is found in a wide range of exhibitions.

3. Artists enter the field of (hard) science, biology and physics. However, art doesn’t work on the same level as science as an equal partner.

4. Artists are opening new spaces of experimentation, looking for new forms of empowerment that are unleashed inside the digital flows. To be found in the most unexpected spaces.

I was next and talked about net activism in the age of Web 2.0 and social networking and the critique of monopoly behaviour of companies such as Google. I am certain parasite strategy of the facebooks will be overcome by turning social networking into a (free software/open source) tool. This also recently occurred to blogs that moved from centralized corporate sites such as Blogger to easy-to-use software that everyone can install and adjust. It should in fact also happen to Twitter. Over at scripting.com Dave Winer is a fierce promoter of breaking up Twitter in such a way. Twittering is a social activity that should not be monopolized by one company. Also interesting in this context is Winer’s warning that this social activity should not be seen as ‘news’ production.

The debate with Ronaldo Lemos started when I started to talk about the difficult position of (digital) artists in the Web 2.0 age. For me Creative Commons (CC) is not a utopian idea or a choice but a reality. There is no way back to the corporate control of content through intellectual property rights. This implies certain responsabilities for those who promote Creative Commons. How are artists, writers and researchers are going to make money in the Creative Commons Age? As I wrote elsewhere it is not enough for evangelists of ‘free culture’ such Joi Ito and Lawrence Lessig to connect CC to innocent youngsters that fool around with MTV or Hollywood footage or music and are punished by the Law for illegally downloading and altering corporate information that is not theirs. Instead of offering your content for free as the only available option left (“go and make your money with the t-shirts”), I suggested to develop an alternative monetary peer-to-peer economy that will secure a basic income for the growing group of creative workers.

Ronaldo Lemos, of course, defended Creative Commons saying it is voluntary. People have a choice (I disputed this). He concluded that the heroic phase of Web 2.0 is coming to an end. Everybody is uploading their own content everywhere. This process has come to a point of exhaustion. There are no more social relations to be explored–and exploited. This means that the way Web 2.0 companies and trying to make money out of free content, people’s profiles and social relations.

I’ll have to leave it here. It’s too hard for me, as someone involved in the debate, to summarize this discussion. What did strike me, to close this posting, is the remarkable unfamiliarity of many of the Creative Commons activists to have an internal strategic debate, out in the open. Artists, designers and critics should demand–and work on–alternative sources of income, together. Creative Commons has had too many ‘easy enemies’ so far. It’s time for some tough talk, amongst each other. For me and many others CC is not just an option, it’s the default. Creative Commons is killing artists and other ‘content producers’ — unless we develop viable alternative sources of income.

PS. The online video files of the event have now been uploaded to YouTube.

Korean We Are Not Sick Video Lecture by Geert Lovink

Download as PDF http://whatdomuseumsconnect.kr/programs/1/sad-by-design-we-are-not-sick In this presentation, Geert Lovink discusses the dark side of the net. The mental state of internet users is tragic. Instead of empowerment and self-organization, what we mostly see around the internet is anger and despair. How did we end up like this? This lecture will zoom in on the widespread [...]

Call for INC Theory on Demand on Ethics Washing in AI

Download as PDF Call for Chapters/INC Theory on Demand Economies of Virtue: The Circulation of ‘Ethics’ in AI and Digital Culture Edited by Thao Phan, Jake Goldenfein, Monique Mann, and Declan Kuch Who funds research into the ethics of AI technologies? How does AI ethics relate to issues of power? And how does an industry-sponsored [...]

Download as PDF Jess Henderson from the No Fun blog (hosted on the INC site) and the Band of Burnouts exhibited in Zurich her own version of the materials generated by We Are Not Sick (me and John Longwalker). This consists of music tracks, texts, slides  and videos. Here you can read an email interview [...]