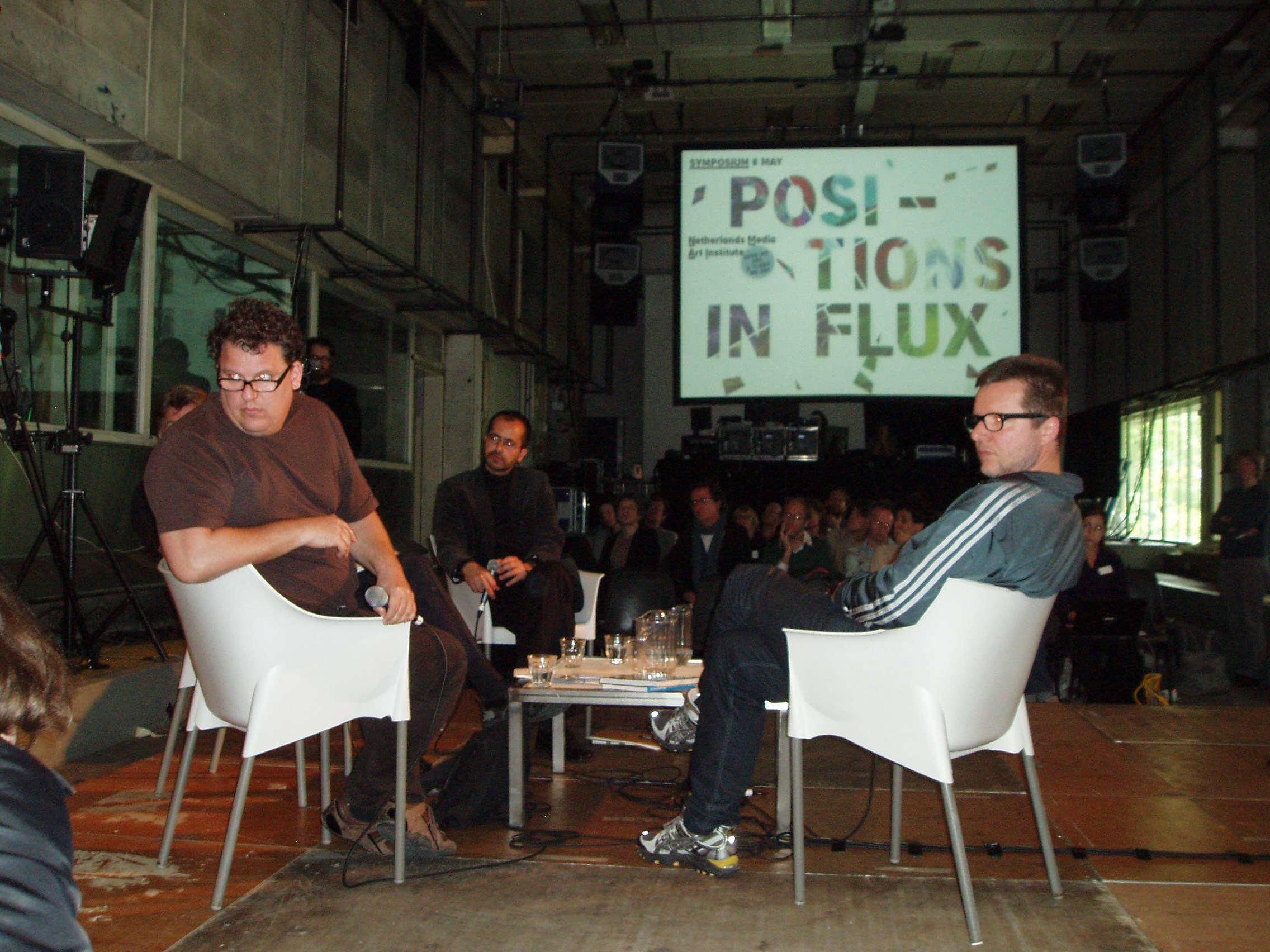 On the event of the Montevideo/Netherlands Media Art Institute 30th anniversary, departing curator Susanne Jaschko put together a one day symposium entitled Positions in Flux. Régine Debatty at We Make Money Not Art blogged about it. Unfortunately, I was only able to attend the morning session. The event on May 8 2009 took place in Trouw Amsterdam, the followup of Club 11. From what I heard, Positions at Flux had a critical take towards the common media art discourse and asked relevant questions. It was a relief to see that the attention was, for once, not focused on history, preservation and conservation. Cultural heritage has already taken over way too much attention space–in part because this is one of the few areas where there is still plenty of funding. Sigh. Just for one day, no celebration of “medium religion” or “art meets science”. Director Heiner Holtappels opened by noticing that new media art is not easily accepted by fine art. Traditional art has become eclecticism. According to Heiner, all art is technology based. The subject of the symposium was a visible break with the video art heritage that Montevideo has been known for. Politics topics, a courageous step? “Is there a future for us?” is a question not many institutions dare to ask. In the Dutch daily De Volkskrant of that day, ex-Montevideo curator Bart Rutten (now Stedelijk Museum) took up the role of expressing the ambivalent feelings of the Dutch art establishment towards the new but no longer young art form. Whereas he praised Montevideo’s work, he himself had moved on. “You can ask yourself if Montevideo should continue to show only media art works. In this way they preserve their specialism. It was my main reason to leave.”

In Zero Comments I mapped the current challenges for new media arts. While society at large is inundated with (new) media, the art branch that deals with the digital moved itself in a ghetto. While this analysis still holds up, many in the sector openly admitted the shortcomings and are now putting in place strategies to escape the dead end street. Technology has lost its original fascination, while spreading even faster in society. Is this a reason enough to abandon the field? While experimentation with electronics and the digital might have lost its aura and the spirit of curiosity has somewhat fained, the field of new media arts at large is still growing, despite institutional setbacks here and there. What most participants shared was the feeling that, despite the intimidating institutional violence of the large players, museums will die or become a zoo if they do not deal with the Digital. Some say new media arts lacks the timeliness and the depth. Whereas ICA London closed its media lab, Laboral in the North of Spain, which opened in 2007, is now a large exhibition space, devoted to media art. Chairman Chris Keulemans emphasized that new media arts was always at it best when it criticized the media itself, with its codes and nodes. Each of the three presentations in the morning session gave a different answer to the question how relevant political work could be produced.

The Iraqi-American artist Wafaa Bilal is known from his installation Domestic Tension, in which the artist lived in a gallery space for a month, pointed at by paint ball gun operated by web users. Shoot an Iraqi had 80 million visitors and, according to Bilal, was a “strange mix of aesthetic pain and pleasure.” What made the work so popular was the power of viral connections, in particular through chatrooms and video he put online. What happened here was a confrontation between conflict zone and comfort zone, disengagement and engagement, virtual versus physical platform — both in the case of the artwork and war in Iraq itself. Bilal concluded that the body has its own language that is not in sync with the electronic reality. Bilal made a distinction between interactive works, in which the end-states is already determined, and dynamic pieces that are open ended. A lot of the old school new media art is interactive. Increased user participated was illustrated in Bilal’s story of the ‘virtual human shield’, a group of people that gathered to protect the artist from being shot at. Dog or Iraqi was a month long online debate who gets waterboarded: a dog or an Iraqi? Bilal also briefly discussed his modded version of a 2003 US shooting game that he renamed into Virtual Jihadi. Instead of killing Sadam the user can now hunt GW Bush. This and other projects were documented in Wafaa Bilal, Shoot an Iraqi (City Light Books, San Francisco, 2008).

Former Etoy Hans Bernard of Uebermorgen.com didn’t show projects but read a text concerning the role of “European techno fine art avant garde.” I am great fan of Uebermorgen. It’s in fact becoming impossible to list all their interventions and hacks. Uebermorgen is all about “surreal outcomes”, not bound by any medium. “The transformation from digital to physical is important. The work is not pop art, it is rock art. We are not activists, we are actionists.” For a while seeking large audiences was a thrill, but that’s no longer the main motivation. There is a new strategy for each new project. Bernard did his best to prove that Uebermorgen’s intentions were neither political nor ideological. The aim should be Art, not Politics. Communication is the 9-5 job, but that not the passion. Bernard’s insistence on the non-political status didn’t convince. Uebermorgen’s claim, not to have any political agenda, refers to an ancient, rigid definition that was already problematic in the late seventies when I studied political science. Maybe in Austria politics is still associated with corrupt parties and fat, ugly politicians but elsewhere in the world people use a much broader definition of “the political”. His insistence on artistic freedom is amiable but the idea that once art becomes political it turns into politics and seizes to be art, simply doesn’t hold. His separation between the private opinion of the artist as a citizen and the Artist as a public figure is problematic for the same reasons. Bernard’s insistence  that “perception and production need to separated” sounds good–but we all know that visual arts no longer operates outside “perception management.” Autonomy, at least in the Dutch context, is the official state religion. We all anticipate aesthetic impact, even if we reject the categories of the day and undermine the dominant visual logic. Hans, there are no commissars anymore that control the ateliers. If there is any censor it’s probably the Politically Correct Self. So, if we state, “in production we need to be free,” there is no one who will stop us — but ourselves.

Knowbotic Research, teaching and working in Zurich, was the third presenter. Their translocal distributed temporary works avoid–and seek–the Political in yet another manner. Christian Huebler showcased the Blackbenz Race project between Prishtina and Zurich, a city marketing proposal that was refused because of its negative image of the proper Swiss finance capital. The broader idea was to play with the Kosovo-Albanian-Swiss people that hover in-between places. Code words are fog, smoke, blurred spaces and multiple identities. The self-built stealth boat project has a similar intention. The micro audience become actors here. Activism doesn’t need more exposure and transparency. Art doesn’t need moral outcry. The celebrity industry took over this role. Art questions and creates new spaces for reflection. What’s required are slow spaces. All three projects showed that new media art “doesn’t need to be a monade, merely celebrating itself.” (Huebler) This is the age of entering other contexts, times and spaces–assisted by production houses that have in-house knowledge about the specificity, and the Eigenartigkeit, of digital technologies.