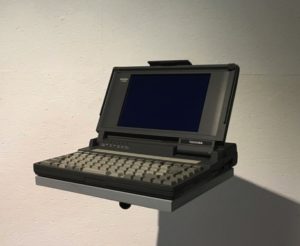 During my first visit to Japan in 1990 I got acquainted with the Toshiba DynaBook. Unlike earlier laptops, this one was small, elegant and easily fitted into a backpack. A year later I was able to purchase one. This wonder of compact technology accompanied me during my travels to Berlin and Eastern Europe in the first part of the roaring 90s when I was writing for Mediamatic magazine. Our Agentur Bilwet (Adilkno) group composed The Media Archive and Datadandy books on this machine. The laptop assisted me in my move from Dutch to English as my main writing language. Even though it did not have a color screen, and ran MS-DOS (no Windows yet), I could pretty much do everything compared to what I do now. In 1992 a friend brought a new part over from Japan that could easily be installed next to the battery: the modem. From now on I was able to dial into bulletin boards. In 1993 I got access to the internet via hacktic, the forerunner of the xs4all provider. The rest is (my personal) internet history: The Digital City, desk.nl, nettime. The machine retired when I purchased an Acer in Taiwan, in 1999. No nostalgic feelings for a primitive technology. The Dynabook remains superior: a symbol of Japanese industrial supremacy, built before its downfall—in 1992.

The Dynabook is on display as part of the magnificent Rosebubs-Hidden Stories of Things exhibit in Leipzig: http://d21-leipzig.de/index.php/aktuell-/212.html.

La Repubblica interview: From Sad by Design to Zoom Fatigue

Download as PDF Interview with Geert Lovink by Annarita Briganti For La Repubblica, May 31, 2021 Italian online version: https://www.repubblica.it/cultura/2021/06/08/news/geert_lovink_viaggio_nello_stress_da_iperconnessione_la_tecno-tristezza_si_verifica_quando_e_tutto_troppo_e_dobbiamo_smet-304844326/ Italian version as pdf: Lovink interviee 06_08_21 Original English email version: Annarita Briganti: What are Zoom fatigue and techno sadness? Geert Lovink: In 2019 the Italian translation Nichilismo digitale came out with Bocconi Editore in which I [...]

“Social Media are not the New Smoking”: Interview with Geert Lovink by Juan Íñigo

Download as PDF Published in Spanish in the Latin-American online edition of Jacobin: https://jacobinlat.com/2021/05/13/las-redes-sociales-no-son-el-nuevo-tabaquismo/. English original below. Juan Íñigo: In a recent article you talked to several theorists about “zoom fatigue,” a term that has become popular lately. What makes a video conference so demanding and psychologically exhausting during covid? Geert Lovink: Video conferencing has [...]

Download as PDF By Lucia Tonelli & Giorgia Giacomini We’re MA students in Communication and Graphic Design at ISIA Urbino, Italy and we’re researching the act of publishing for Jonathan Pierini’s Graphic Production Techniques class. The task is to provocatively ignore the boundaries of established publishing practices and broaden our field of investigation. Giorgia read [...]