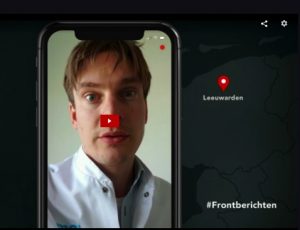 I have been limiting my news intake since week 2 of the corona crisis, saving it up for the evening, when I read the physical papers (Het Parool and NRC) and we watch the traditional 8 o’clock national news at NPO1, a Dutch habit I must have lost some 30 years ago. Around week  3 I discovered a series of smart phone witness accounts broadcasted on Dutch public television around 10.15pm to wrap up the day, called ‘frontberichten’. Because of geo-blocking audiences outside of NL cannot watch it but there is a Facebook account where you see the short episodes (I am not on FB). They are all in Dutch (if you are inside NL, you can watch them here). The idea is simple. Those working in the ‘vital professions’ can send the mobile video clips via the usual platforms. If these professionals have been approached by a production company or whether they have indeed taken the initiative themselves remains unclear; same can be said of the selection. This is further compiled by a traditional TV format, including smooth editing, music and in-between clips here and there. Apart from these largely invisible aspects, the content is impressive.

From a critical television studies perspective it’s an easy job to deconstruct the message. Most obvious, there is the critique of the military metaphor of the title (“messages from the front”): heroic first account video clips from our national fighters in the trenches that battle to ‘heal’ the country, edited down to sentimental highlights with the aim to reunite the nation and achieve high impact emotional triggers.

All fine. But why did I get drawn to these first hand accounts? I noticed that I got really curious to see the next episode. It’s not just what we get to see, inside intensive care units, the long hours of ambulance workers who are often the first to come in contact with corona patients, the drivers, doctors and underpaid assistants. What moved me most is the evolution of the video diary genre that my generation of media activists and video artists have co-shaped. Remember the Amsterdam tactical media festival Next Five Minutes, the Witness NGO in New York or the hyper-local autonomous Telestreet in Italy? We then moved on to vlogs and point of view or dm videos, the names vary. Please add, the list is long.

What should be remarked here is not just the appropriation by cynical reality television producers of ‘our’ genre (a boring form of criticism) but the collectively felt potential, the promise that we can do some useful, empowering, transformative—and maybe even subversive—with the democratization of video as a witness tool–in a peer to peer fashion. Project them on walls, set up federated distribution hubs outside of the monopoly platforms. Liberate video from its platform chains. How do we see the documentary ‘witness’ aspect in relation to ever-growing technical possibility of ‘liveness‘ of social video? Twenty, thirty years ago this was all but a dream and a clumsy avant-garde gesture. Now we can see what ordinary people, in extra-ordinary circumstances can do with this tiny little revolutionary weapon in their pocket.

Download as PDF The first part of this email exchange entitled “The Soros Center was a Perfect Machine” appeared in July 2019 in ArtMargins here and occurred on the occasion of the exhibition The Influencing Machine at Galeria Nicodim in Bucharest, curated by Aaron Moulton. The second e-mail exchange took place in March 2022 in [...]

Download as PDF (original here: https://bluelabyrinths.com/2023/01/02/the-end-of-the-internet-an-interview-with-geert-lovink/) In this interview, I talked with Geert Lovink about his latest essay Extinction Internet, Mark Fisher’s hauntology, the memory of Bernard Stiegler, the XR movement, and the phantoms of accelerationism. Alessandro Sbordoni: Today, platform realism makes us feel like another Internet is no longer possible. In your essay, Extinction [...]

Download as PDF (This essay draft was written in late 2021. Due to academic publishing blues, the Bernard Stiegler memorial anthology for which this contribution was written is now supposedly coming out in late 2023 with Bloomsbury. HH & GL) In this tribute to Bernard Stiegler, we highlight an obscure yet important episode in his [...]