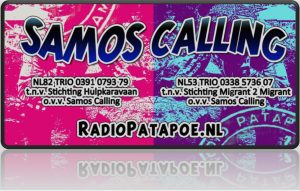 Twenty African refugees living in the Vathy camp on the Greek island of Samos received €12,50 of phone credit from a new initiative named SAMOS CALLING. This initiative of Migrant 2 Migrant (M2M), Radio Patapoe and Stichting Hulpkaravaan aims to bolster the communication capacity of refugees, to make their voices heard and create connections.

The first 20 slips were given on Saturday 27th of March to refugees who are stuck in the camp but receive no monthly allowance of €75,- from UNHCR. There are two ways to become penniless: 1) because you have two rejections of your asylum request, or 2) because you have been granted a residence permit by Greek authorities. With no money and no camp food, you are dependent on the goodwill of others. You should leave the camp but have no place to go to. With the help of some phone credit, they can contact their family and share their stories with the world. Through Radio Patapoe and other platforms it’s possible to share their feelings and dreams to find a way out of a camp that was built for 645 people but is now overcrowded with more than 3000 human beings.

Radio Patapoe’s weekly program PSJM brings you updates from its Greek correspondent, professional journalist Ingeborg Beugel based on the island of Hydra. Triggered by her call for help in December 2020, a collaborative way was found to both support refugees, give them an outlet to the world and make the radio program even more useful as well!

Eze Kay, our first agent in the camp, turns out to be a fantastic rapper, as you can hear from the songs he produced back in Freetown, Sierra Leone, and also his live raps about his life and ambitions.

Erika Mauritz, the coordinator of Hulpkaravaan Griekenland, a citizens’ initiative which has the main purpose to support local and refugee volunteer groups in Greece and delivers aid parcels from Holland to various hotspots in Greece, organized the contacts on the ground to facilitate the purchase and handover of phone credit to the refugees.

Eze Kay and his friend A.Y. collected 57 names and telephone numbers of men and women from various African countries, both English and French speakers. Their communication platform is a Whatsapp group called phone credit for refugee.

Between Eze Kay, Erika and Jo (who runs M2M), a procedure is now in place to make sure the transfer of credit will be secure, safe and fair for all involved.

€270,- have already been collected from listeners and other donors, which was sufficient for the neediest 20 among the 57 members of the group. The others would have to wait till the next round of funding, giving priority to those with no income at all.

Barbara Zreik, coordinator of We for kids, another small NGO cooking for kids in the camp, and trusted partner of Hulpkaravaan, then received the collected money and went to the local Vodafone shop with a delegation of refugees. She bought 20 credit slips and handed them over to those present, as shown in a video. Those who could not come down to the shop received the code of the slips on their phone.

We are happy to share the cheerful voices and smiling faces that were the immediate result of this important pilot project!

Give a call, donate a dime! Let’s keep in contact!