Has everything today become a network? From the birth of the information society in the postwar years, to the ubiquity of the global network with the Internet, the network is weaving its web everywhere, in space and time. At the heart of societal issues and artistic changes, it continues to multiply. At a time of environmental crisis, the first network is also that of living things, where humans give themselves in coexistence with other species. Around a hundred works, from the 1940s to the present day, are exhibited here, including several especially designed for the exhibition: some reactivate missing networks, such as the “Minitel” device, while others are connected in real time to the Internet, cryptocurrency networks, as well as social media platforms, such as Twitter.

This exhibition begins with the architectural utopias of the post-war period. The notion of “global network” is then found in artistic practices around cybernetics, at the same time as the information society is emerging. In the 1980s, the computer network became the artistic medium with telematic art and then Net.art, ten years later: artistic practices develop into a network, in a political and ubiquitous dimension.

After the emancipatory utopia of the network, the artists critically question its effects linked to a surveillance society, the omnipresence of social networks and the emergence of blockchains, in an invisible, even occult, dimension of the network. A return to the very etymology of the word “network”, namely “net” and “knot”, will be explored, explaining the role of reticulations in art, design, and architecture. Finally, the first network is the living, characterized by self-organization. Faced with the environmental crisis, the intertwined history of living things opens up new artistic, post-anthropoceneic ecologies, which integrate principles of interdependence and continuity between forms of living things.

The artists of the exhibition:

Here some photo impressions of the exhibition: 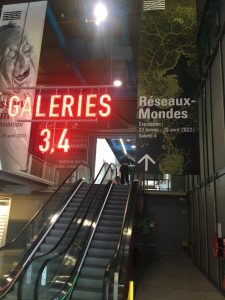 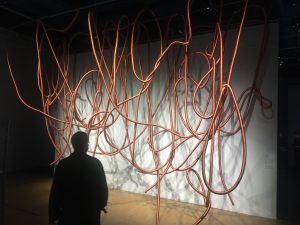 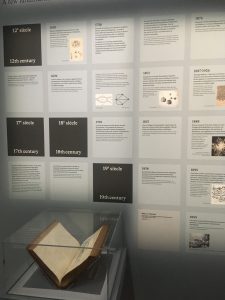 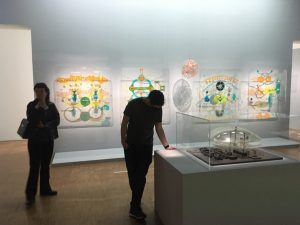 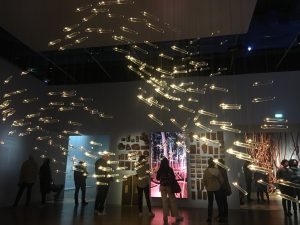 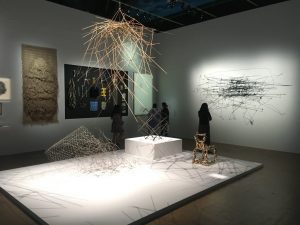 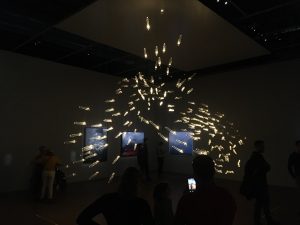 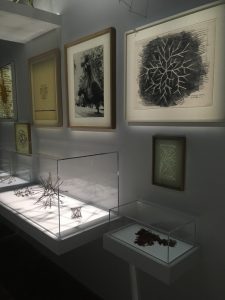 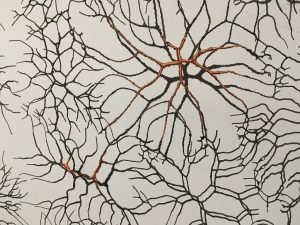 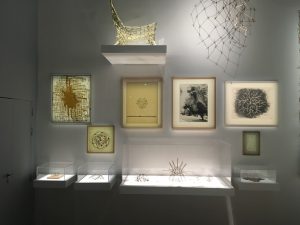 Has everything become a network? What is the place of networks in today’s society, innervated by social media and the dematerialization of the network, which has itself become virtual? More than ever in the age of the Internet, that “network of networks”, the network is at the heart of technological mutations and societal issues such as the surveillance society, the omnipresence of social media, the atomization of the individual and actor-network theories. Since the outbreak of the Covid-19 pandemic, the relevance of networks in artistic creation has been heightened, whether it is in terms of production, form, or diffusion of the works.

The first network is also that of living things, linking different species and generating new forms of connectedness. Around the exhibition “Worlds of Networks” (February 23rd – April 25th 2022), as part of the cycle entitled “Mutations-Creations”, a three-day symposium will bring together artists, critics, philosophers, etc.., around the impact and significance of networks today.

EXHIBITION VISIT IN THE MORNING

“Critique of reason and of the network’s cunning”
Everything today has become a network, from society and its technologies, to imaginaries and epistemology. The omnipresence and omnipotence of the network must be questioned both as concepts and social representations. A critique of the network’s reason allows for its redefinition as a link of places and an interworld between technology and the body. The concept’s genealogy highlights its plasticity: it has successively caught in its meshes the living body, then nature, and, at last, society. Now worn out, the concept of network has degraded into a technology of the spirit that has become a master key. A critique of the network’s cunning highlights the ambivalence of its imagery, which alternates between communication and surveillance. The horizontality of the network is often opposed to the verticality of the tree to sketch the future of institutions, if not of societies. The imagery of the network carries a technological utopia that promises social transformation through technique, starting with the Internet. The combination of the network’s reason and of its cunning, i.e. the binding of a paradigm and of a technological utopia, is at the groundworks of the great contemporary narrative surrounding the network, that we have called “retiology”.

Pierre Musso, a philosopher by training, is a university professor, state PhD in political sciences and researcher at Télécom Paris Tech. He is the author of many works on networks, Saint-Simon’s philosophy and and political and industrial imaginaries, including Critique des réseaux [Critique of networks] (2003), La religion industrielle [The industrial religion] and Le temps de l’Etat-Entreprise [The Era of the Enterprise-State] (2019). He has just published L’imaginaire du réseau [The network’s imaginary] (Manucius, 2022).

The network: the one and the multiple (3-4:30)
Linking elements without denying their diversity, describing their reciprocal influences without assuming a hierarchy between them: network thinking, today, seems to have pervaded all domains of thinking and creation. How is the contemporary luck of this model in disciplinary fields as diverse as philosophy, social sciences and artistic practices to be understood? Which historical circulations and conceptual necessities does it obey to?

Collaborative creation (5-6:30)
A collaborative dimension seems to be generalising within creation, stemming from a complementarity of trades as much as from the multidisciplinarity of projects and a renewal of creative processes through the collective. In these peculiar times in which the network concentrate a major part of exchanges, to which extent and in what ways does it sustain collective production and creativity?

“Read, Write, Execute: What are the Machines that Determine Thinking?”
What are the machines that determine thinking? We may approach the question in a number of ways. The typical approach is to consider (or perhaps even craft) a philosophy of media. This comes under the name of media studies or media theory, where media artifacts are taken as the objects of thinking. Yet there is also an alternate approach, the media of philosophy, where the a priori conditions of philosophy themselves take center stage, engulfing thought as a kind of object. For if “media determine our situation,” as Friedrich Kittler once notoriously put it, is it not also true that philosophies shift according to the changing conditions of media technology? In this lecture we will explore a series of philosopher’s devices drawn from the domain of machines and computers–Heidegger’s Grundig, Nietzsche’s Schreibkugel, Derrida’s Macintosh Plus, Malabou’s neural net–as a backdrop for a different kind of inquiry, not simply that our writing instruments contribute to our thoughts, but also that our thoughts themselves are instruments.

A network art has developed, derived from hacker movements and sustained by collaborative open-code programming practices. Social media is at the heart of today’s issues, and blockchain technology and data exchanges have generated a multi-user world that poses the question of authorship and the unique character of a work. Social and political satires are also a critique of a totalising vertical network with an addictive and depressive dimension, a far cry from the emancipating utopia of the network in the beginning of the digital era

Networks and interactions (4:30-6)
Digital networks, through their recent evolutions, are the support of new interactive artistic forms: collective interaction devices, online performances, analysis of large volumes of data. These new situations displace the codes of the frontal presentation or reveals hidden data.

A new artistic ecology integrates principles of interdependence and continuity between all forms of living things, all of them interlinked. Technologies are explored as a tool of inter- species communication, aspiring to connect worlds at the limits of human perception. At the heart of this ecological thinking, the network has become a mesh, a vector of “the interconnectedness of all living and non-living things”, in the words of Timothy Morton.

The digital networks that emerged in the 21st century afford glimpses of censorship, surveillance society and are revealed at the heart of ubiquitous, invisible and mercantile systems. As individuals become wholly dependent on technological platforms, of which new infrastructures of control are we the targets?

Nettime and net art 1995/96 references and the panel with Jodi: 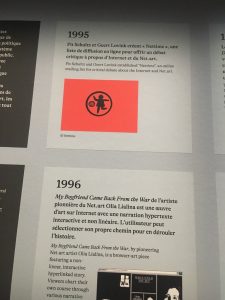 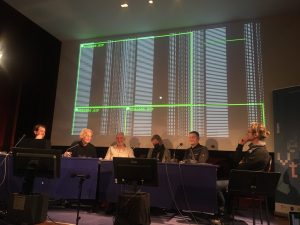