French artist Christophe Bruno introduced the audience into some aspects of his art concerning search engines, espacially Google. In order to explain his latest project Dadameter, he initially presented a selection of projects he has worked on over the last years. His career as an aritst started with the project Epiphanies which Bruno established in 2001. It is a Google hack collecting pieces of texts and reconstituting these particular pieces in a new structure. This idea was inspired by James Joyce who walked through Dublin writing down phrase fragments he heard on the streets and called those epiphanies, therefore Bruno calls Google an „ephiphany machine“. 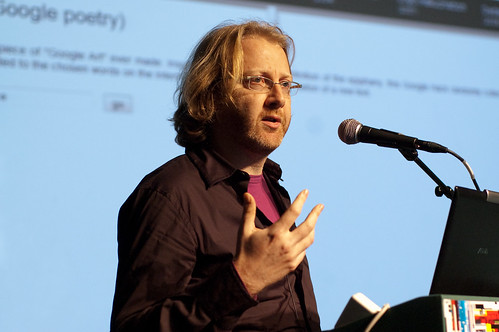 Another project of Bruno is Fascinum from 2001. In this project Bruno developed a program searching through Yahoo! news sites of different countries and select and present those pictures which were looked at the most in each country. In a work of 2002 called Adwords Happening, Bruno depicted the development of a generalized semantic capitalism. He started buying different words at Google‘s AdWords application and presented the price of different words, this creates the awareness that via Google any word of any language has a price and can be bought.

Bruno identified that corporate organizations started to highjack methods formerly applied by conceptual artists and called it „Guerilla Marketing“. This was the origin of a famous work of 2004 called Human Browser, in which persons were verbally displaying search results to other people which were transferred to them in realtime via ear-phones, the individual human being then embodies the world wide web. Logo.Hallucination is a different project of Christophe Bruno in which he scans through pictures circulating in the internet and searches for logos of corporations and organizations that are represented in those pictures. If a logo is detected in a picture Logo.Hallucination automatically sends cease and desist emails complaining about the violation of copyright laws. This selection shows steps leading to Christophe Bruno’s newest project, the Dadameter. It is inspired by the work of the french author Raymond Rousse and is a very ambitious and complex project which cannot be summarized easily, the aim is the production of a map displaying our distance to dada. Due to its complexity it is highly recommended to look up the details about the project here: Detailed information about the Dadameter.