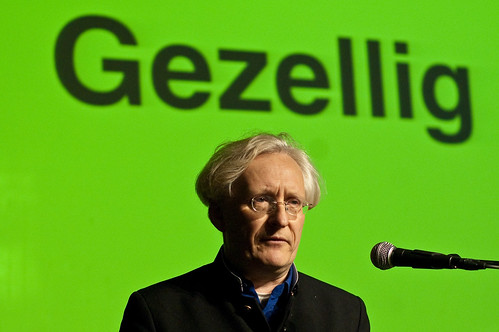 Steve Pemberton starts off with explaining the Sapir-Whorf hypothesis, which proposes a link between langauge and thought. If you do not have a word for something, you cannot think about it, and if you do not think about it, you will probably not invent a word for it. Pemberton applies this idea to the term of “Web 2.0”, which has been created by a publisher who wanted to organize some conferences about the idea that websites achieve value by users transferring their data to them. But the concept of Web 2.0 already existed in the Web 1.0 era, namely in the form of ebay. Nowadays, when we can utilize the established concept of the Web 2.0 one can talk about and discuss this phenomena.

In his speech he suggests that people should have their own machine readable websites instead of giving their data to middlemen and mediators as the model of Web 2.0 requires it. According to Pemberton the problem is that the network-organization  the Web 2.0 separates the web into several sub-webs. Referring to Metcalfe‘s Law Pemberton states that this separation reduces the value of the web as a whole.

Additionally he mentions further problems prevailing in regards to the Web 2.0. First of all using Web 2.0 applications like social networks and photo-sharing sites forces you to log in to certain kind of organization, you have to adapt to their data format to be able to publish and work on your contents, which is equipollent to a certain commitment. Subsequently there is the question about the case of deletion or closure of your account or even the death of the network (like mp3.com, Google video, Jaiku, Magnolia). One has to rely on the provider that he keeps your account running, so that the data and the work you have put into it do not get lost. Facebook for example closed a woman‘s account because they decided that an uploaded picture showing her breastfeeding is totally inappropriate.

The crucial point of Pemberton‘s view is that we need personal webpages which have to be readable by machines, so that the sites can be scanned and used by an along coming aggregator. According to him the solution to enable machine readable sites is the format RDFa, which Pemberton refers to as the „CSS of meaning“ and which represents the incarnation of the Web 3.0. The advantage of RDFa is that it joins together different data automatically, things do not have to be joined together because RDFa already linked data together from different places.  Futhermore Pemberton states that the usage of machine readable sites has several advantages for users. For example the browser can provide the user with better experiences, if it is able to identify addresses and dates it could directly offer the possibility to find it on the map or inscribe it to the calendar.