After dwelling in the eighteenth, nineteenth and twentieth century in the morning panels, Felix Stalder comments that the program’s strict chronological order will now lead us into the twenty-first century. Keeping the metaphor of the map and the mapmaker alive, the next two speakers will talk about the politics and interests involved in processes of ranking, mapping and creating order in search results. Two such politics are ‘bias’ – why does a certain ranking exist – and ‘rent’ – how are all these practices transformed into a business. 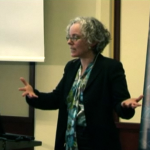 Contrary to the earlier presentations, Von Couvering’s talk shifts from what a search engine should be to what they are today. Her major concern is in the responsibilities information vehicles have to the public interest. Bias gets embedded in search results in a number of ways; first of all, search engines do not index the whole Web. Secondly, they do not index reliably. Furthermore, some engines systematically favor certain sites and the local advertising market has also proven to play a major role in the quality of the indexing process and subsequent size of the index: If you don’t have enough to offer, you will get a reduced quality of service. Search engines are a matter of public interest since they help people find things they don’t know about, and people are unsophisticated in their queries; they tend not to look beyond first page of results and tend to trust the rankings. Bias, then, has major implications.

Many early engines have merged over time. From 1996 on, media companies bought up search engines as they proved to attract large audiences. The ‘integrated portals’ that emerged were selling an audience to advertisers; the classic media model of production, packaging and distribution. Many search engines died under this audience-based model, as the engine itself was often not developed anymore. Currently we have moved toward paid performance advertising, pay-per-click, a traffic-based value chain. Google is no longer looking at an audience but at the movement of users from one site to another. Search engines have become online media giants with an incredible market share and ‘gaming the system’ has become a profitable professional activity.

What has been done to address the problem of bias? Von Couvering points towards search engine efforts to improve search quality by focusing on relevance and customer satisfaction. What constitutes a relevant result is based on a customer’s frame of mind. In terms of the technology, relevance is an objective indicator of search engine retrieval quality. Relevance – not fairness, diversity, objectivity or formative value for instance. Defining quality as relevance is problematic. You can’t succeed in working toward a less biased search engine, unless you get beyond the idea of relevance, and introduce an alternative mode of framing search results.

Von Couvering argues that there is the need for a discussion of professional codes of ethics for information scientists. Engineering goals are primarily described in terms of efficiency, or sometimes ‘elegance’. She feels that there is room for standards such as they exist in library science for instance, which is access for everybody, or perhaps in journalism where seeing both sides of a story is a central element for professional development. There is a need for public debate on an Internet that is other than a market place or a retail store, which she found was a recurring theme in her research. She concludes: “This is not information retrieval, this is sales.”.

Matteo Pasquinelli: Surplus and the immaterial: political notes on the “industrial revolution of data”
Matteo Pasquinelli is a writer, curator and researcher who works at the intersection of French philosophy, media culture and Italian post-operaismo at Queen Mary University of London. 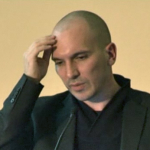 Pasquinelli  starts his talk with a February 2010 article from The Economist, Data, data everywhere, which mentions the excessive dimension of networks and contemporary capitalism in terms of immaterial production. The authors introduce a paradigm shift they call ‘the industrial revolution of data’. For Pasquinelli this is a crucial topic as in radical thought and network activism, networks are often thought of in a binary, symmetrical way. Notions such as free culture and creative commons in his eyes bypass the idea of a growing network and surplus in terms of excessive cultural production. The Economist addresses the question of how to deal with this exuberance and proposes a paradigm shift in political strategy as well. The data generated may well serve us to analyze things like government spendings, something  Pasquinelli feels is a relief from thinking in old paradigms like the panopticon, control society etcetera. This is a society of metadata, no longer of control. In activist circles, Pasquinelli states, metadata is often not a known subject.

The article also states that the data currently created exceeds the available storage abilities and computing power, causing much information to get lost. Pasquinelli notes that this friction between the ‘global mind’ and the ‘global body’ is interesting in respect to Moore’s law, and suggests that we deal with an  ‘attention deficit syndrome of the globe’. Still, rather than storing all data it is important to keep track of trends, which is exactly what the society of metadata is about.

The notion that networks reach critical mass and transform into something else, is a paradigm Pasquinelli feels is missing from the current debate. In our flat cartography of networks, we fail to describe the forces of energy that cross them, such as economic value. He asks; what would be the form of the network singularity? In political economy, we could say that capitalism is indeed a form of singularity, a transformation of money to currency following critical mass. In both political and media theory, finding people that work on the notion of excess is hard. One example is Antonio Negri who argues that today, value is no longer related to the time we put in our work but to the production of social relations and links.

Pasquinelli suggests that the form of the network singularity may one of a vortex, a modern dimensional space. But to understand this we should return to the main topic of today: The diagram of Pagerank, a model of semantic relations that is increasingly becoming an economic diagram. Nicholas Carr has previously noted how feeding intelligence into Google’s system makes the machine smarter and Brin and Page richer, a model that political economists describe as cognitive capitalism.

When The Economist article describes the data overload, it refers to a friction between different layers of the network – people and machines. In the current debate, Pasquinelli argues, it is important to distinguish three distinct network layers; a hardware layer (memory), a layer of data or content production (immaterial) and a layer of metadata. The layer of content production is producing so much that the hardware layer can’t keep up. Google and other technologies of governance transform data to metadata. When we talk of free data or new political strategies we seem to focus on content production only, Pasquinelli argues, unaware of the hardware layer below and governance of metadata above us. He then describes ‘rent’ as the new business model that develops within the friction between these layers. As an example, he mentions Google and Apple whose products happily profit from free culture and illegal file sharing. New parasitic economies are developing in relation to the overflow of data.

In the feudal system, the rentier was one who hired out land that was cultivated by others, currently it is the one who hires out new spaces of production that are cultivated by others. Today, there is a widespread activism against intellectual property which Pasquinelli supports, but at the same time he concludes that we are unaware of the form of businesses related to spaces where intellectual property is no longer a necessity.

The metaphor of the rentier is picked up in the discussion following Pasquinelli’s talk by Elisabeth von Couvering, who wonders whether it may be of help in explaining the form of content media companies such as search engines produce, as it seems to exist only in the form of ‘packaging’; indexing or a navigational system. Pasquinelli answers that to describe cultural economy, we need to distinguish between the paradigms of intellectual property – selling your copyrighted product – and providing a seemingly free space that produces an attention economy around it. In the economy of the Internet there is only space for monopoly, one hegemonic social network follows the other, and although they may belong to the regime of free culture, there is a clear business model behind them.

M.C. Schraefel asks whether Pasquinelli has considered the more positive aspects of open data for the renter – such as the production of API’s by these rentiers that allow users to use data in whatever way they want, or Amazon’s server farms that rent out space for people who can’t afford or manage the hardware, to do interesting things with their data. Pasquinelli answers that rent refers to monopolistic exploitation on all the three layers of hardware, content production and metadata, in relation to collective processes. It is about the economic business models that we never discuss in depth. In answer to a later question, he notes that contrary to the feudal description, today’s rent is more dynamic, the economy of knowledge is liquid, immaterial and monopolies such as Google’s may collapse and be followed by others.

Rent, another audience member argues, is strongly related to database marketing in which user data is the capital involved. Von Couvering feels that there are two stores of value in search today, first of which is the data archive; profiles and linkage info that is mined, and secondly; traffic, monetizing clicks as they happen. Facebook for instance takes travel in itself and monetizes it by restricting and charging search engines to their traffic. Perhaps the question should be what the trade-off will be between these sources of value.