Siva Vaidhyanathan and Adam Florin were invited to speak at the University of Amsterdam on September 17 for the Data Drive event which is the first in a series of lectures organized by Robin Boast, Jan Hein Hoogstad and Sander van Maas. Data Drive aspires to be a research program that delves into the intersections between technology and academic practices, thus it will feature thinkers from both worlds. 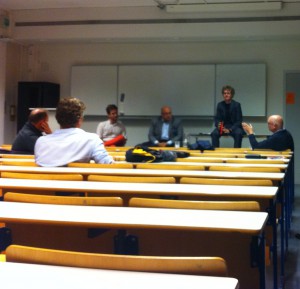 “The humanities need to become digital and they inevitably will”

Robin Boast introduced the four hour event and the purpose of Data Drive, “born from the pressure of digital” claiming that the inseparable meeting between digital and the humanities happened a long time ago. “The claim that the humanities need to become digital makes as much sense for the people working within the former as the claim that science or medicine need to become digital.” Boast emphasized that the digital is not a space that people will inevitably need to occupy or that it does not fill a missing void that exists within the heart of humanities, but that it does bring a number of capacities and abilities for old industries. Further describing the Data Drive vision, Boast mentioned that he plans to invite speakers and academics to address the question of how data, digitality and digital social status impact contemporary research and society.

The following session of Data Drive hosted the launch of an open project called “Coding the Humanities”, which is a coding course specifically tailored for academics and people involved in the humanities field. Jan Hein Hoogstad showcased the online platform, open for collaborations with institutions and individuals, mentioning however that it is not going to be a MOOC even though the environment will be similar. He addressed the issue of the common misconception regarding the fact that learning how to code requires people to be very technical, stating that the only requirement of this course is actually getting the proper motivation to do it. 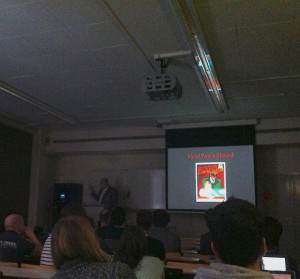 From the demise of the musical industry and copyright forms to anarchy and complete control.

Siva Vaidhyanathan, cultural historian, media scholar and professor at the University of Virginia, was asked to come to Data Drive and revisit his second book, “The Anarchist in the Library: How the clash between freedom and control is hacking the real world and crashing the system” (2004). Although “forgotten and out of date, not recommended to people very often”, the book offers captivating points of view upon the controversy which encompasses the control of information and culture in a digital world. Vaidhyanathan told the story on how the book was supposed to be about Napster and the demise of the music industry facing the digital threats and copyright (meant to be a sequel for his first book), but that it eventually had to be about anarchy, control of information and the impact of the Internet on the politics, societies and cultures. As the events of September 11 had a great influence on Vaidyanathan and the rest of the contemporary world, he talks about the following assault on the privacy of the individual and the monitoring of personal communications by the FBI and the NSA which, at one point, ceased to be in the public eye –  that is, until recently. Vaidyanathan stressed that even though the presence of certain technologies and open communication networks have had an amazing influence on people’s lives, allowing everyone to think they’re publishers, videographers or deejays, it could all be over soon because “there’s nothing necessary about open communication networks, nothing that guarantees the survival of open protocol and free software”. Vaidhyanathan could not have left Google out of the discourse, as he claimed that it’s currently competing against Facebook, Microsoft and Apple to become “the operating system of our lives”. 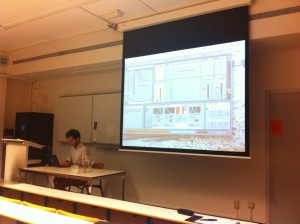 Back to music with Loom

Adam Florin, creative technologist based in Los Angeles who builds dynamic design systems and web backends for art organizations and publishers, came to present his latest musical software called Loom, a generative music platform for Ableton Live which allows users to easily generate musical ideas in the studio, practice improvisation on an instrument, add depth to a solo laptop performance, build dynamic sound installations or research rule-based music. Although the main topic was music, Adam Florin cruised through issues of history, linguistics, information theory and aesthetics. The event concluded with an open discussion with the speakers, the organizers and the public about ideal freedom, reviving of the 1960s, systems of improvisation and how meticulous engineering merges with complete randomness.