Short interview with Anton Tantner from network cultures on Vimeo.

Much critique and debate at the 2nd edition of Society of the Query took place around the way that knowledge – a complex, dynamic and essentially cognitive (human) process – is indexed and retrieved via algorithmic identification made possible by software search engines. This cold, mathematical and apparently democratic way of surfacing certain knowledge at the expense of other has been criticized to leave little space for attention to quality and content; also, search engine’s  apparent gratuitous service (“it’s for free”) does not consider private data (such as  logging into your Google account) as currency. Therefore, the politics of search engines brought up for discussion issues like user data privacy, filtering bubbles, censorship and surveillance.

Yet the society of query wasn’t born in the digital age; nor are search engines and the heated issues around them a novelty for the last centuries’ societies, argued Anton Tantner. Professor at University of Vienna, Department of History, Tantner stepped in with a much needed media archaeological and historical perspective. How have people in the past gained their information and knowledge in order to get by? What can be considered the analogue search engines of the past and what did “search” mean in the first place? What were the issues people raised for critique in regards to them and to what extent were there similar concerns to today’s digital search engines? 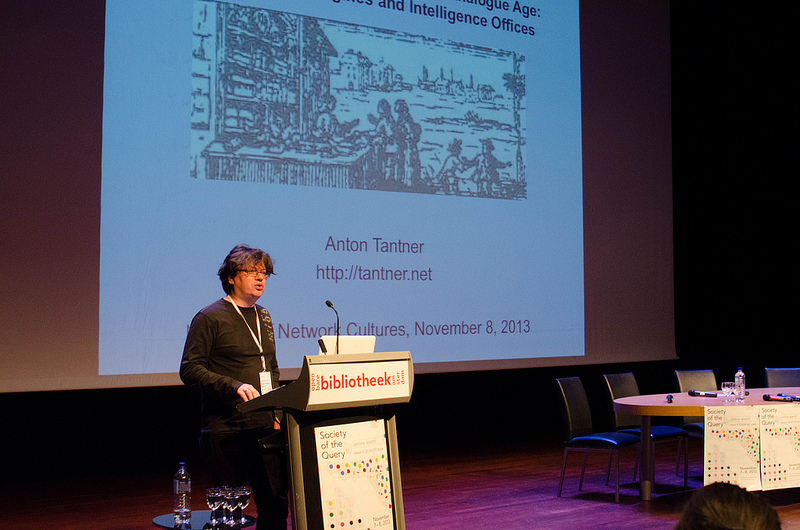 Tantner’s presentation – Towards a history of search in the analogue age: human search engines and intelligence offices – identified particular actors who played the role of human search engines, starting the 15th to late 20th century.  He divided them into two categories: individuals (contact agents, servants and concierges) and, latter on, institutions (registration bureaus or intelligence offices).

In the early 15th century Europe, with the emergence of a more clear employment market, household administrators used the services of agents or contact brokers in order to find the right servants. The agents charged a fee for their services and promised to recommend suitable candidates. They thus acted as centralizers of employment information and also held a certain power to either recommend or reject servants in search for a new job.

Another example consists of information holders were the servants  themselves – whether working for a long time in a household or constantly changing them, they held insights (often intimate or inconvenient) of those families. It was especially the chief servants, who controlled servants and reported to the landlord, who held a double-edged position: privileged – as they knew everything about the households  of their landlords and all other servants – but also hated because of this very fact, which is why many chief servants were also suspected of being spies. This ‘frenemy’ relationship was quite common.

Yet another emerging human search engine role was played by the go-betweens: the middlemen between foreign traders and the local markets. The go-betweens were valuable knowledge resources as they knew contact points and market trends in their city, which was unknown information to the freshly arrived foreigner. Some played a very specific role of enlisting accommodation opportunities, and thus foreigners would always inquire for go-betweens in order to find an inn or empty apartment. In large towns, this role was played by concierges, who were always aware of the networks within the community and knew both the strong and weak ties of every household. They were often the best resources to find accommodation but also work. Since they were in charge of their landlord’s property (and often there were several properties), they were furthermore  in charge of finding tenants and administrating the rent payment. They often had the same frenemy relationship with their owners and tenants. As they became vital sources of information and management for both sides, they were also regarded with caution and doubt, perhaps for the very reason that knowledge is power and knowledge can be transferred to competing bodies.

The late 15th century saw an institutionalization of these individual, informal knowledge keepers into what Tantner defines as intelligence offices or registration offices. This was a result of both urbanization and growing flux of travelers and merchants, as well as a sense of chaos associated with expanding networks and power structures in the city. Tantner presented the first recollection of these registration offices in 1595 in Paris, by Michel Eyquem de Montagne:  registration offices responded to the need of people to archive events, transactions, agreements, with start and ending dates, for purposes of recollection but also of pragmatic use. The registration bureaus were private institutions that charged fees in exchange for their services: enlisting and finding accommodation, work, starting a business, registering as a citizen etc.  They reflected the gender restrictions of the time – women had no right to enter and use these bureaus , namely because of fears of prostitution-related activities, so women looking for work had to ask their husbands to do it for them. Soon enough, the activity of the offices expanded- they became a good meeting  place for scientific manifestations – public lectures or exchange of goods and services, for example. By doing so, they directly competed with the traditional forms of education, of doing business.  While the latter regarded them as enemies, the state supported intelligence offices on the argument of fresh competitiveness that would help the city resources grow.

When intelligence offices became outspoken of their mission to help organize society and provide answers to anyone with a question – much like the mission of many search engines today – they also raised issued in regards to their perceived purpose and practices. Because they collected sensible information about people (identity, address, business, purpose, employment history, criminal antecedents,  social capital history), they soon became regarded either as police-like  controlling bodies or simply as exploiting the people who needed information, by requiring them to pay fees. Critique of the bureaus acting as surveillance machines also arise, as many servants were enlisted in the job hunting and were subject to privacy tracking of their employment history, as well as criminal convictions. In this sense, registration offices slowly became the first institutions to introduce formal individual identity (such as identity paper, document) as necessary to become a recognized citizen of the society. The need for this “official”, regulated search later took the form of telephone and address books; with the digital search engines, this information is stored on social media platforms. 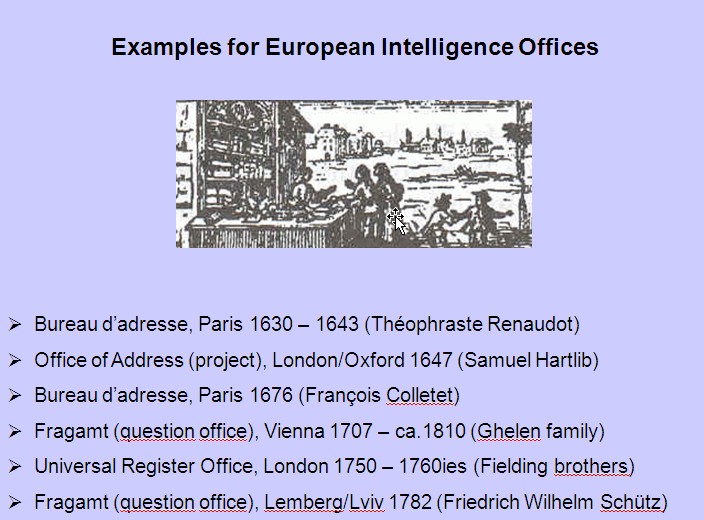 Anton Tantner’s historical perspective sheds new light on how the fairly equivalent search engines of the analogue age – the human search engines and registration or intelligence offices – were in fact preoccupied with  the same type of search people do on digital search engines. “Does X know about housekeeping?” might not have been first asked by LinkedIn, but rather by a 15th century old household lady in search for a new servant. The likes of accommodation search engines like Booking.com were in demand then as they are now, with particular individuals and institutions serving as advisers to travelers. They would also serve as hubs of entrepreneurial initiatives, with many citizens interested in opening a business using the advice and services of high-privileged knowledge keepers.

It was with the expansion of these human search engines from delivering specific information to taking up the mission of knowledge and society organization that raised issues like government use of private data of citizens, surveillance or prosecution. Tantner made a good point to show that the very idea of allowing a search engine, whether digital or analogue, to organize knowledge and society is, in fact, always problematic. He identified the main conflict in the double-edged politics of search engines – their frank usefulness for users in having access to information, on one hand, and the way they require something in return- namely, private data -which makes them dangerous.

In other words, today’s digital search engines hold the same ‘frenemy’ type of relationship that human search engines had with society before: there’s an overwhelming need to rely on them and a general uneasiness in giving away private data.

Society of the Query #2 – Anton Tantner: Towards a History of Search in the Analogue Age from network cultures on Vimeo.